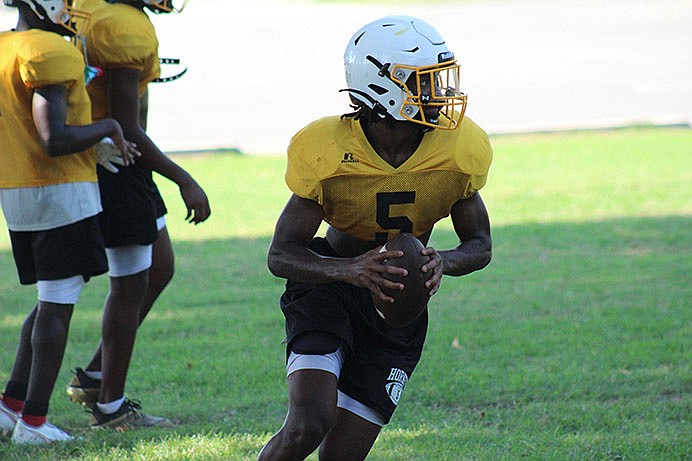 Photo By Michael Hanich Jermaine Edwards, quarterback, running back and linebacker for the Harmony Grove Hornets gets ready to pass at a practice on August 24.

Last season was a difficult year for all teams in the sport of high school football. The Harmony Grove Hornets encountered a tough off-season as they were not able to build off their 2019 season, where they went to the 3A state Semi-finals. The Hornets finished with an overall record of 6-5 and made it to the second round of the playoffs.

This season, the Hornets are looking to get back into contention for the 3A state title. They will have the talent and experience on both sides of the ball to do so.

Offensively, they have players that are dynamic playmakers. On the defensive side of the ball, the Hornets return a significant amount of experience in their nest.

These are players Harmony Grove needs to step up this season as they look to get back into contention for the state title:

Daniel Hill returns this season as the most experienced running back in the backfield for the Hornets.

Last season, Hill rushed for 361 yards and three touchdowns on 54 carries. He was a solid option for the Hornets with plenty of playmakers this past season.

The offense is under Hill's guidance as the primary back in the backfield. Hill is one of the quickest players and the strongest player in the weight room. His speed and strength help him tremendously in his ability to get yards after the first contact on offense.

Hill is also one of the main contributors on the defensive side of the ball for the Hornets. Last season, Hill was the team's leading tackler with 89 total tackles and 63 solo tackles. Hill also accounted for 13 tackles for loss and two sacks. He will be a difficult player to defend at the outside linebacker.

Another dynamic offensive star and highly efficient defender for the Hornets is Jermaine Edwards. Although he is one of the top running backs for the Hornets, he is often their flex player in the backfield. He is the wildcat quarterback or the read-option player under center often.

Last season, Edwards threw for 135 yards and a touchdown on seven completions (out of 22 passing attempts). He will be a more aggressive runner this season for the Hornets, even if he is at the quarterback position.

Defensively, Edwards is a stud at the outside linebacker position, especially as a pass rusher. He can put pressure on the quarterback and create chaos in the backfield. This past season, Edwards accounted for 75 total tackles and 47 solo tackles. Edwards also accounted for six tackles for loss.

While Hill and Edwards are the star offensive players for the Hornets, Hicks is the leader of Harmony Grove's efficient defense.

Hicks did not play the entire 2020 high school football season. In the 2019 season, Hicks accumulated 48 total tackles as a sophomore. Like Hill, Hicks is a player that has a great combination of quickness and brute strength.

Hicks is a defender that can crash the line of scrimmage through quick reads of the ball carrier or specific blitzing schemes. He is also a player that can create more yards after the first contact from defenders. The Hornets will be thrilled having him back as an extra runner in the backfield and a potential receiver but, mostly, as the middle linebacker.

The three featured running back/linebacker players are not the only star Hornets playing on both sides of the ball. McCann has started at the left tackle for the Hornets for 22 consecutive games. Last season, McCann accumulated the highest blocking grade among all of the Hornets' offensive line. He is the anchor behind the Hornets' powerful and dynamic rushing offense behind several formations.

McCann is a flexible offensive lineman that plays with size and leverage. He is also the starting defensive end for the Hornets' defense.

Last season, McCann accumulated 62 total tackles (fourth-on-the-team), 45 solo tackles, 11 tackles for loss (third-on-the-team), three sacks and two fumble recoveries. McCann is a player that can create a push at the line of scrimmage and create pressure in the backfield.

Johnson comes into this 2021 season as the starting quarterback for the Hornets' dynamic offense.

Last season, under the junior Hornets team, Johnson was 9-0 as the starting quarterback. He appeared in four games this past season for the varsity team as he threw for 114 yards and a touchdown on seven completions (out of 22 passing attempts). He also rushed for 78 yards and two touchdowns on 17 carries as a read-option quarterback.

Johnson is an athletic playmaker that can beat defenders with his legs and possesses solid arm strength. Despite being one of the youngest starters on the team, there will be a ton of weight on his shoulders as he will attempt to lead the team back into the playoffs.