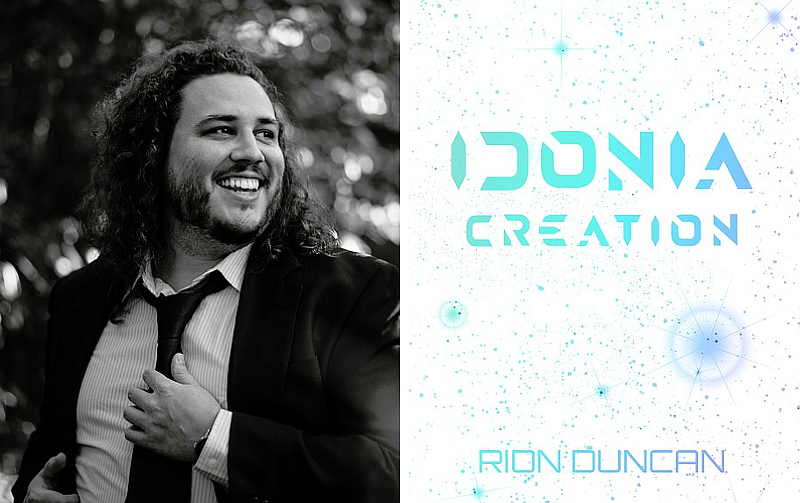 Rion Duncan’s debut novel is the sci-fi adventure “Idonia Creation.” Duncan, who lives in Camden, is also the founder of Rise Publishing. (Special to the Democrat-Gazette/Evan Wheatley)

Camden author Rion Duncan has big plans for his debut novel, "Idonia Creation," and the publishing company he started to usher the book into the world.

The sci-fi fantasy adventure is the first in what Duncan says could be at least six novels that would encompass his Idonia Saga. The 32-year-old also envisions his Rise Publishing as not just a home for his books but works by others. Ultimately, he hopes to expand it into a multi-platform entertainment company.

But first there is this novel, which was released Aug. 24. In it, Duncan introduces us to Ally, Erin and Rachel, three friends from a small south Arkansas town who have moved to Little Rock for college. They cross paths with the Brownings, a strange, rich, enigmatic family and learn the fantastical origin story Idonia.

The more they find out, the more they start to question their own realities as they are pulled into the mysterious and sometimes scary world of the Brownings.

The novel is available online through Amazon, Barnes & Noble and at WordsWorth Books in Little Rock and The UCA Bookstore, Duncan says, adding that he hopes to have copies at independent bookstores across the state. For information, see risepublishing.org.

In this interview that has been edited for clarity and length, Duncan talks about the "Twilight" novels, "War and Peace," creating the world of Idonia and his plans for Rise Publishing.

There's a lot going on in this book, which is just the beginning of what could be a lengthy series. I'm guessing you've been living with these characters and this world for a long time. When did you actually start writing "Idonia Creation"?

I started with ideas of what would become the book series in probably ninth or 10th grade. It was little odds and ends. Very simple stuff, but I knew I wanted to tell stories. It wasn't until my second or third year in college that I started to form an actual story and a genuine narrative.

I'll admit, I read "Twilight" [laughs]. I got swept up in it and read all the books and saw all the movies. But I read the first page of "Twilight" and I put it down and thought, I can write a better book than that [laughs]. Of course, [Stephanie Meyer] is a best-selling author and has a lot of talent, but that was my arrogance and bravado.

It took a long time before it became anything. I wrote the first outline of the story over that next year, but it wasn't until I was at [the University of Central Arkansas] when I was 22 or 23 that it started to click. I spent about four months just rolling through my first draft, which was about 120,000 words. It's kind of grown up with me. Every new draft got a little bit more mature.

There's an interesting mix of characters in the book. Were Ally, Rachel and Erin in it from the start?

Yes. They were some of the earliest. It started with just Ally and Joshua [Browning]. Again, coming off of "Twilight," I was writing a love story, but as soon as I got started I knew I needed some other characters. I went back and included [Rachel and Erin]. As I wrote, they became bigger and bigger.

I have a Google Docs file that is just a hodgepodge of notes where I just built backstories. I have short stories and anecdotes of these characters, just for myself, so that I could get to better know them and understand them.

The story is based in Little Rock but there's this other reality, this world of Idonia that is so radically different from the everyday lives of Ally, Erin and Rachel and that is slowly encroaching on them. What are you creating with Idonia?

Idonia is meant to parallel a lot of the creation stories that we as humans have to help explain where we come from. I wanted to create a world that encompasses all of that and be something even more grand and stir people's imaginations. I wanted to try to create a world about what lies beyond our universe. Eventually, it's a space opera. I don't get into that much in the first book, but that's what it will be.

My favorite book of all time is "War and Peace." People might say it's about a war, but not really. It's a story about the people in it and how they are affected. The war is the just the setting. That's why "Idonia Creation" is just teasing some of this. I want the characters to remain at the forefront.

You've self-published this novel, and you have ambitious plans for Rise Publishing to go beyond just books, right?

I've always wanted to do it this way. For my entire life I've been around people with creative minds who want to tell stories and bring worlds to life. I want to grow Rise Publishing into Rise Entertainment and have a publishing company and do film and television. It might be a pipe dream, but if you look at any of my bios, it says 'dreamer.' I live in a constant state of chasing my wildest dreams.