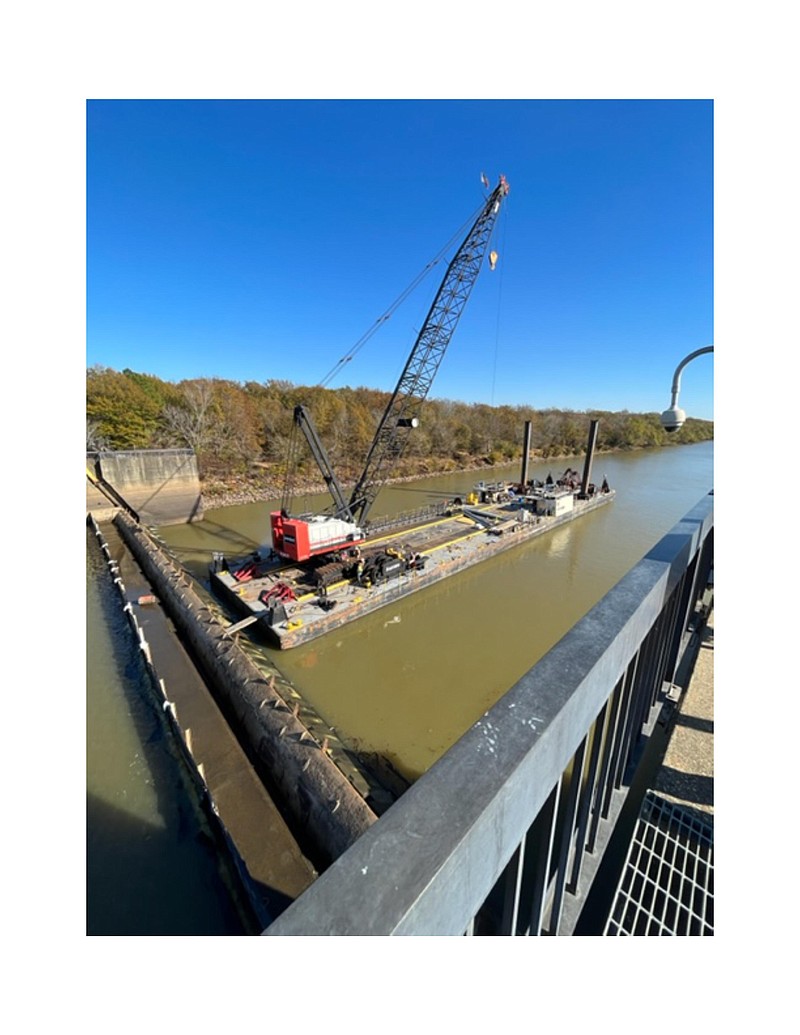 A crane barge at Thatcher Dam on Nov. 27, after the USACE completed installation of the poiree needle system, a temporary dam that will aid in efforts to repair a leak in the Lock and Dam. (Courtesy of the Union County Water Conservation Board)

The Thatcher lock and dam is one step closer to being repaired following the installation of a "Poiree needle system," a mechanism to stop the flow of water at the lock and dam.

A press release from Camden Mayor Julian Lott, in part, states, "The installation was completed with the pool level at 72 ft at Thatcher, allowing for repairs to begin on the seal of the hinge crest gate.

"Our initial concerns were that the levels at Thatcher would have to go to 71 ft, which naturally would cause lower water levels again at Camden. Yesterday the pool was at 73.5 ft; today (December 1) we should see that level near 74 ft. Corps construction barges are in place and construction operations are commencing.

"This is tremendous news! What this means is that the City of Camden and water customers within Ouachita County will have no fear of degradation to its water supply nor any impact to water usage," Lott said in the press release.

A statement in early November by the Army Corps of Engineers (USACE) said the cause of Thatcher's elevation loss was a "leak in the seal of the hinge crest gate."

Mayor Lott's statement went on to say, "The US Army Corps of Engineers will continue to monitor and inspect the structure at Thatcher while construction is underway to repair the seal of the hinge crest gate. We should not see the water at these lower levels again; the Corps will not have to draw water down to safely remove the 'Poiree needle system.'"

"Once repairs are made at Thatcher, we will see pool levels there return to normal elevations, i.e., 77 ft."

He added that his office has maintained close communications with key agencies and individuals related to the matter and wished to thank the Vicksburg District, US Army Corps of Engineers, the Ouachita River Valley Association (ORVA), Ouachita County Judge Robert McAdoo and the Ouachita County Emergency Management Office, Union County Water Conservation Board, city officials and the managers and employees of the Camden Water Utilities.

He added, "I am also thankful for the trust and continued support of our citizens and the Ouachita County residents while we managed through this stressful situation.

"My office, in conjunction with Camden Water Utilities, will continue to provide reports and updates to our citizens. The health and welfare of our citizens has always been my highest priority," Lott said.