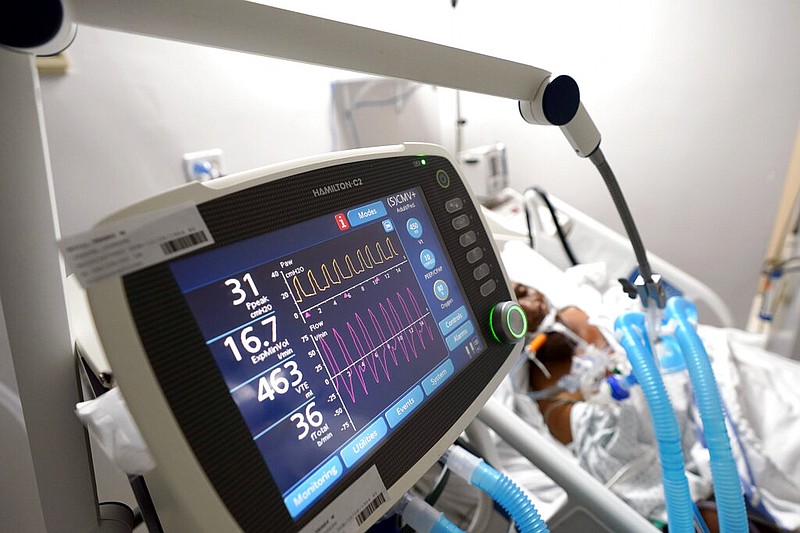 A ventilator helps a covid-19 patient breathe inside a hospital's coronavirus unit in this July 6, 2020, file photo. (AP/David J. Phillip)

Arkansas' count of coronavirus cases rose Thursday by 918, the third daily increase in a row that was smaller than the one a week earlier.

After falling a day earlier, however, the numbers of the state's covid-19 patients who were hospitalized, on ventilators and in intensive care all jumped by double-digits, with the number hospitalized rising to its highest level in more than seven weeks.

The state's death toll from the virus, as tracked by the Department of Health, rose by 14, to 8,810.

"While our vaccine numbers are better than last week, we still see an increase in hospitalizations, ventilator usage, and active cases," Gov. Asa Hutchinson said in a tweet.

"I am somewhat optimistic about this winter, but we can't let up. Vaccinations remain the key."

Meanwhile, the U.S. Centers for Disease Control and Prevention's recommendation on Thursday of booster shots of the Pfizer vaccine for 16- and 17-year-olds cleared the way for Arkansas providers to begin administering the additional doses to the new age group.

Health Secretary Jose Romero said the boosters, given six months after the second dose, are a defense against the omicron variant, which hadn't been identified in Arkansas as of Thursday.

Citing laboratory tests, Pfizer and BioNTech said Wednesday that, while two doses of their vaccine may offer protection from severe illness from the new variant, a booster dose may be needed to prevent infection.

"We're looking forward and seeing that omicron is eventually going to be here," Romero said Thursday.

"We want to protect citizens as robustly as possible. If they need three doses, that is, if they need a booster dose, they should get it. That's what we're doing. We're trying to keep people out of the hospital."

Under guidance issued earlier, the CDC also recommends boosters for everyone 18 and older who received their second dose of Pfizer or Moderna at least six months ago or the single-dose Johnson & Johnson vaccine as least two months ago.

While larger by 58 than the increase on Wednesday, Arkansas' rise in cases on Thursday was smaller by more than 300 than the spike of 1,226 cases the previous Thursday.

As a result, the average daily increase in the state's case count over a rolling seven-day period fell to 768, down from a recent high of 838 a day the week ending Monday.

With new cases outpacing recoveries and deaths, however, the number of cases in the state that were considered active rose by 420, to 7,962, the largest number since Oct. 5.

The number who were on ventilators rose by 15, to 95, the biggest number since Oct. 29.

The number in intensive care jumped by the same number, to 192, its highest level since Oct. 20.

The number of intensive care unit beds in the state's hospitals that were unoccupied, however, rose by 15, to 66, as a result of a drop in non-covid-19 patients who were in intensive care.

People with covid-19 made up about 18% of all the state's intensive care unit patients on Thursday, up from about 16% on Wednesday.

Romero said he "wouldn't get too optimistic" about the downturn in the state's new cases this week compared with last week.

"The worst, quote, unquote, is yet to come, because we've got Christmas and New Year's coming up, and people are going to be congregating more and more together," he said.

Also, he said, "The weather has been relatively nice," allowing people to spend more time outdoors.

"Wait till it gets colder," he said.

Omicron is also a concern.

"Once this comes in, I think that we are going to see a flurry of cases," he said.

Even if the variant causes severe illness less often than the still-dominant delta variant, as initial reports suggest, it could cause the state's hospitalizations to go up if it spreads rapidly enough, he said.

Health Department spokeswoman Danyelle McNeill said the department as of Thursday had been notified of 22 people in Arkansas who had recently been to one of eight countries in southern Africa that are subject to a federal travel restriction that took effect last week in response to the new variant.

Through a contractor, the department has been contacting the people and advising them to get tested and quarantine for at least seven days.

None of the people had tested positive for the coronavirus as of Thursday, McNeill said.

Continuing an increase that began after students returned from Thanksgiving break, the number of active cases among students and employees at the state's public elementary and secondary schools rose by 247, to 1,370, from Monday to Thursday, according to Health Department reports released twice a week.

The total as of Thursday was the largest since Nov. 22, when many schools were closed for the holiday.

The Bentonville, Springdale, Cabot and Rogers school districts on Thursday continued to have the highest totals.

Compared with Monday, the number had risen by 14, to 75, in the Bentonville district; by two, to 61, in the Springdale district, the state's largest; by 13, to 56, in the Cabot district; and remained at 38 in the Rogers district.

The Pulaski County Special School District was listed as having 16 active cases as of Thursday, the same number as on Monday.

The Jacksonville/North Pulaski School District was listed Thursday as having six. On Monday, it was not among the list of districts with five or more.

Kimberly Mundell, a spokeswoman for the state Department of Education's Division of Elementary and Secondary Education, said no districts this week had reported virus-related shifts to virtual education as of Thursday.

In a weekly report, the Arkansas Center for Health Improvement said 28 school districts had 50 or more new cases per 10,000 residents within their boundaries over a recent 14-day span, up from 19 districts a week earlier.

No districts, however, had 100 or more cases per 10,000 residents during the most recent two-week period, ending Monday, the center reported.

A week earlier, the Salem School District in northern Arkansas was the only district in the state with that many new cases per 10,000 residents.

Most of the districts with 50 or more new cases per 10,000 residents in the most recent two-week period were also in the northern part of the state, the center noted.

"This is the largest number of red-zone districts we've seen in over two months," center CEO Joe Thompson said in a news release.

"This holiday season, as many of us go Christmas shopping in crowded stores and prepare to attend indoor gatherings with family and friends, we should keep in mind that the Delta variant is all around us ― and possibly the omicron variant as well. The best protection is to get vaccinated. Start if you haven't; get boosted if you have."

The cases used to calculate the rates for each district include those among residents living within the district, excluding incarcerated people, and residents of nursing homes and human development centers.

At colleges and universities, the number of active cases among students and employees rose by 14, to 142, from Monday to Thursday, according to Health Department reports.

The University of Arkansas, Fayetteville, continued to have the highest total, 43, which was up from 38 as of Monday.

Arkansas Tech University in Russellville on Thursday had the next highest total, 10, followed by Harding University in Searcy and the University of Central Arkansas in Conway, which each had seven.

Active cases among students and employees at private elementary and secondary schools rose by nine, to 34, from Monday to Thursday.

No private schools were listed as having five or more active cases on either day.

Health Department spokeswoman Meg Mirivel said seven of the deaths reported Thursday happened in October, and the rest occurred within the past month.

Romero said 8.6% of the state's coronavirus tests were positive over the seven-day span ending Wednesday, the same percentage that was initially reported for the week ending Tuesday.

The number of people who have ever been hospitalized in the state with covid-19 grew Thursday by 41, to 28,772.

The number of the state's virus patients who have ever been on a ventilator rose by two, to 3,030.

Continuing an uptick in the state's vaccinations, the Health Department's tally of vaccine doses that had been administered rose Thursday by 13,725, the eighth daily increase in a row that was larger than the one a week earlier.

Booster shots made up 39% of the most recent increase.

The count of first doses rose by 4,760, which was larger by more than 1,400 than the increase in first doses a week earlier.

Already at its highest level since the week ending Sept. 1, the average number of total doses administered each day over a rolling seven-day period rose to 12,075.

The average for first doses rose to 3,627, its highest level since the week ending Sept. 6.

According to the CDC, 61.4% of Arkansans had received at least one vaccine dose as of Thursday, up from 61.3% a day earlier.

The percentage of Arkansans who had been fully vaccinated rose from 50% as of Wednesday to 50.1%.

Of those who had been fully vaccinated, 24.7% had received a booster dose as of Thursday, up from 24.2% a day earlier.

Among the states and District of Columbia, Arkansas continued to rank 37th in the percentage of its population who had received at least one vaccine dose and 44th, ahead of Georgia, North Dakota, Louisiana, Mississippi, Alabama, Wyoming and Idaho, in the percentage who were fully vaccinated.

Nationally, 71.5% of people had received at least one dose, and 60.5% were fully vaccinated.

Of the fully vaccinated population nationally, 24.9% had received a booster dose.