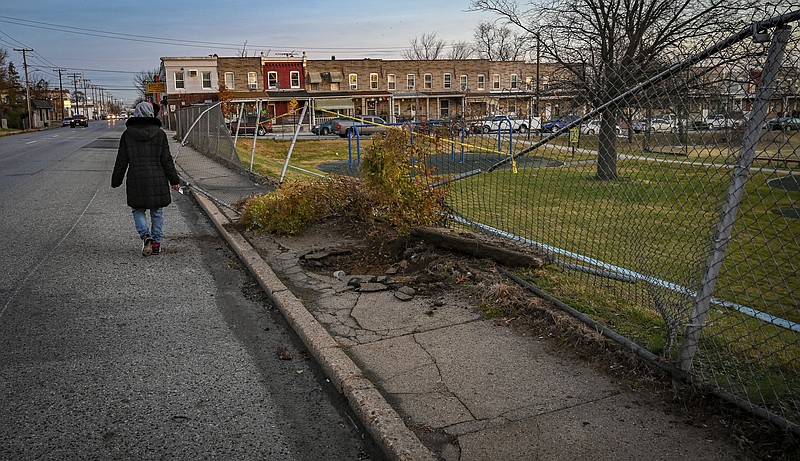 A neighborhood resident walks around a fence that was knocked down when a Baltimore Police officer was shot and crashed through the fence into Curtis Bay Park early Thursday, Dec. 16, 2021. (Jerry Jackson/The Baltimore Sun via AP)

Eds: UPDATES: This version of the story is updated with comments from the senate president and a neighbor.

BALTIMORE (AP) -- A Baltimore police officer is in critical condition after being ambushed and shot while sitting in a patrol vehicle early Thursday, authorities say.

Dr. Thomas Scalea said at a briefing outside the University of Maryland Medical Center's Shock Trauma Center that the officer was shot multiple times and was on life support, The Baltimore Sun reports.

Police Commissioner Michael Harrison said the officer was on duty but not responding to a call in the Curtis Bay area of southern Baltimore about 1:30 a.m. when the shooter approached from behind and opened fire and the officer's vehicle accelerated and crashed.

Officers responding to a report of a crash found the officer, who appeared to be suffering from life-threatening gunshot wounds, then worked to get the wounded officer to Shock Trauma as quickly as possible, police said in a news release. The officer, who was not immediately identified by name or gender, was listed in "guarded condition," police said.

"This was a cowardly, brazen act to walk up and open fire on a police officer who was doing what we asked that officer to do -- to go out to protect and serve," Harrison said in a statement. "Our prayers are with the officer's family. We are determined to find those responsible for this heinous crime and will not rest until we do."

Kevin Kreamer, who lives across the street from Curtis Bay Park, said he heard a loud crash that he now knows was the officer's patrol vehicle hitting a fence and going over a ledge toward the playground. He said his wife heard several gunshots.

"It's terrible," Kreamer told The Baltimore Sun. "My kids play at this park sometimes."

About 30 police cars were in the neighborhood, blocking off the park's perimeter, but they were gone around daybreak, Kreamer said.

Maryland Gov. Larry Hogan tweeted that he has offered the full resources of Maryland State Police to help with the investigation after the officer "was shot in a despicable, ambush-style attack."

The FBI and the Bureau of Alcohol, Tobacco, Firearms and Explosives are also assisting city police with the investigation.

The Baltimore City Fraternal Order of Police Lodge 3 tweeted early Thursday that city and state police union leaders were at the hospital and asked people to keep the officer in their prayers.

Harrison said he and Mayor Brandon Scott met with the officer's family members, "who are, like us, obviously angry, confused, in search of answers, and have an expectation that we will find who did this and hold one or as many people responsible for this as possible."

The police knew few details on the shooting and were asking the public for help finding more information.

"We have a coward on the loose in Baltimore that we must and will find," Scott said.

"It's a level of depravity that just shakes us to our core," Ferguson said. "I hope it's wake-up call that we are on a trajectory that does not work."

There must be a coordinated plan and every resource must be at the table, whether at the state or local level, he said.

"Everyone has to put their ego aside, get around a table and say, 'This cannot continue,'" Ferguson said.