With Christmas in the balance, nations eye UK omicron surge 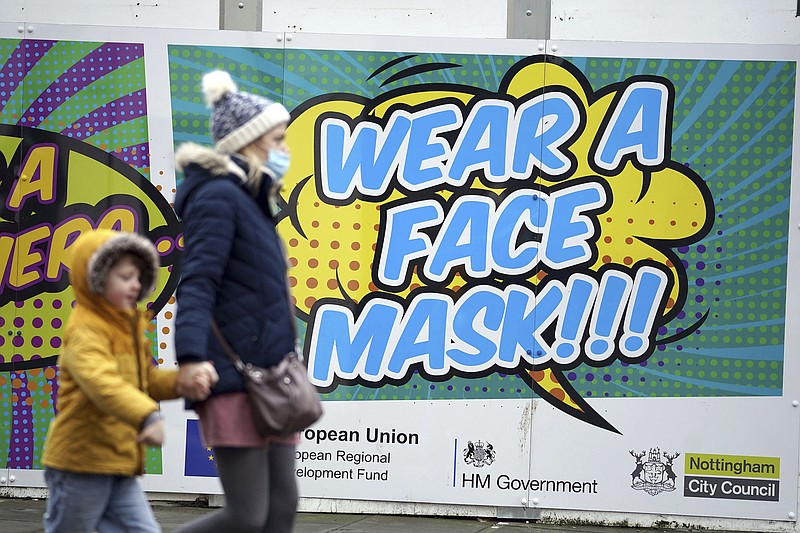 People walk past a billboard inviting citizens to wear face masks to curb the spread of COVID-19, in Nottingham, England, Monday Dec. 20, 2021. Britain’s health secretary has refused to rule out imposing tougher COVID-19 restrictions before Christmas amid the rapid rise of infections and continuing uncertainty about the omicron variant. (Mike Egerton/PA via AP)

LONDON -- Britain's main nurses' union warned Monday that exhaustion and surging coronavirus cases among medical staff are pushing them to the breaking point, adding to pressure on the government for new restrictions to curb record numbers of infections driven by the omicron variant.

Many governments in Europe and the U.S. are confronting similar dilemmas over how hard to come down in the face of omicron, which scientists say spreads more easily than other coronavirus strains, including delta, which itself led to surges in many parts of the world. Early evidence suggests omicron may also produce less serious illness -- though experts caution it is too soon to say -- and that it could better evade vaccine protection.

Even if it is milder, the new variant could still overwhelm health systems because of the sheer number of infections. Confirmed coronavirus cases in the U.K. have surged by 60% in a week as omicron overtook delta as the dominant variant.

Patricia Marquis, England director for the Royal College of Nursing union, said the situation over the next few weeks looks "very bleak," as growing absences from sickness and self-isolation hit hospitals already struggling to clear a backlog of postponed procedures and treat normal winter sicknesses alongside coronavirus cases.

"In many places they're already under immense stress and pressure, and so they are starting to go off sick themselves with COVID, but also mental and physical exhaustion," she told the BBC. "So, staff are looking forward now thinking, 'Oh my goodness, what is coming?'"

But many political leaders are reluctant to impose the stiff measures they resorted to earlier in the pandemic -- often because they promised their people that vaccines would offer a way out of such restrictions and it may be politically untenable to impose them again.

In the U.S., the prospect of a winter chilled by a wave of coronavirus infections is a severe reversal from the optimism projected by President Joe Biden some 10 months ago, when he suggested that the country would essentially be back to normal by Christmas.

Cases are surging in parts of the U.S., particularly the Northeast and Midwest, though it's not always clear which variant is driving the upswing.

In New York City, where the mayor has said the new variant is already in "full force," a spike is scuttling Broadway shows and spurring long lines at testing centers, but so far new hospitalizations and deaths are averaging well below their spring 2020 peak.

France, meanwhile, is desperately trying to avoid a new lockdown that would hurt the economy and cloud President Emmanuel Macron's expected re-election campaign.

Britain's Johnson, whose authority has been hammered by weeks of political scandals, is caught between calls from scientific advisers for new limits on social interaction now, and vociferous opposition within his Conservative Party to any such restrictions.

After a special Cabinet meeting on Monday to discuss the latest figures, Johnson said ministers had decided against immediate restrictions, but added that "the arguments either way are very, very finely balanced."

"We will have to reserve the possibility of taking further action to protect the public," he said.

Ministers are weighing several options, ranging from non-binding guidance for people to limit festive gatherings to mandatory social distancing and curfews for bars and restaurants.

Earlier this month, Johnson's government reinstated rules requiring face masks in shops and ordered people to show proof of vaccination or a negative coronavirus test before entering nightclubs and other crowded venues.

The government is hoping vaccine boosters will offer more protection against omicron, as the data suggests, and has set a goal of offering everyone 18 and up an extra shot by the end of December. More than 900,000 booster shots were delivered on Sunday, as soccer stadiums, shopping centers and cathedrals were turned into temporary inoculation clinics.

U.S. vaccine maker Moderna said Monday that a lab tests suggested that a booster dose of its vaccine should offer protection against omicron. Pfizer's testing also found a booster triggered a big jump in omicron-fighting antibodies.

But many scientists say boosters along are not enough and tougher action is needed.

The speed of omicron's spread in the U.K., where cases of the variant are doubling about every two days, is decimating the economy in the busy pre-Christmas period.

Usually teeming theaters and restaurants are being hit by cancellations. Some eateries and pubs have closed until after the holidays because so many staff are off sick or self-isolating. The Natural History Museum, one of London's leading attractions, said Monday it was closing for a week because of "front-of-house staff shortages."

Other countries are warily watching the U.K., which reported 91,743 more lab-confirmed COVID-19 cases on Monday, close to the record high for a single day set last week.

The Dutch government began a tough nationwide lockdown on Sunday to rein in sharply rising infections. The World Economic Forum, meanwhile, announced Monday it is again delaying its annual meeting of world leaders, business executives and other elites in Davos, Switzerland, because of omicron uncertainty.

But many European leaders have opted for something less.

France and Germany have barred most British travelers from entering, and the government in Paris has also banned public concerts and fireworks displays at New Year's celebrations. Ireland imposed an 8 p.m. curfew on pubs and bars and limited attendance at indoor and outdoor events, while Greece will have 10,000 police officers on duty over the holidays to carry out COVID pass checks.

In Spain, the national average of new cases is double what it was a year ago. But authorities in the country with one of Europe's highest vaccination rates are betting primarily on mandatory mask-wearing indoors and the rollout of booster shots, with no further restrictions planned.

Neighboring Portugal is telling most nonessential workers to work from home for a week in January, but has no other new measures in the pipeline.

Tiago Correia, an associate professor of global health at Lisbon's New University, said European public opinion will accept a lockdown only when pressure on health services makes it inevitable.

"There is no political or social support for a Christmas lockdown," he said.

But Hendrik Wuest, governor of North Rhine-Westphalia, Germany's most populous state, said more restrictions could be on the horizon shortly after Christmas.

"I don't think big New Year parties can happen this year -- unfortunately, again," he added. "Omicron won't forgive us any carelessness if we aren't cautious."