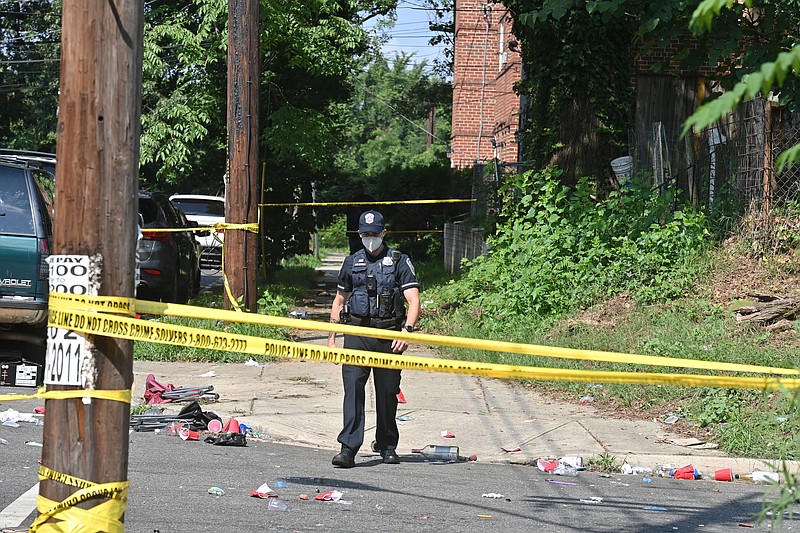 Authorities investigate the scene of a shooting in the Greenway neighborhood of Southeast D.C. last year, when homicides in the city rose for the third straight year, by 19%. MUST CREDIT: Washington Post photo by Marvin Joseph.

A group of 34 of America's biggest cities suffered a 30% total increase in homicides in 2020, according to a new survey published Monday, with police in four Midwestern cities reporting increases of more than 60% over 2019.

In Milwaukee, homicides rose from 97 to 189, a 95% increase. In Louisville, Ky., homicides increased from 90 to 173, a 92% increase. Of the 34 cities surveyed by the National Commission on Covid-19 and Criminal Justice, a project of the D.C.-based Council on Criminal Justice, only four - Raleigh, N.C.; Baltimore; St. Petersburg, Fla.; and Virginia Beach - saw declines in 2020.

The two epochal events of 2020 - the coronavirus pandemic and the nationwide protests over police violence - were likely factors in the increase in slayings, two of the report's authors said. The pandemic limited proactive anti-crime strategies by both police and social workers, commission director Thomas Abt said, and reduced focus on urban hot spots known to be large sources of violence.

And the drastic uptick in violence beginning in June, immediately after the death of George Floyd in Minneapolis, paralleled a similar uptick in 2016 after protests against police use of force erupted, said criminologist Richard Rosenfeld of the University of Missouri at St. Louis.

"The timing is really quite compelling," Rosenfeld said. "It does suggest there is some sort of correlation between" police violence and increased civilian homicides.

Aggravated assaults rose, but only by about 6%, the study found. A separate survey of 129 police departments by the Police Executive Research Forum found that among agencies with more than 250 officers, more than 80% reported a rise in nonfatal shootings last year. Overall, the 129 departments also reported a 39% increase in homicides involving guns.

At the same time, the commission survey found that robberies, burglaries and larcenies dropped significantly in 2020. Abt suspected the coronavirus pandemic sharply limited opportunities for theft when stores were closed and more people were home at all hours. Drug arrests were down by 30% among the cities surveyed, which Rosenfeld said was a continuing trend of police redirecting some resources away from drug enforcement.

Full numbers from every jurisdiction are collected annually by the FBI but not released until the fall each year. Some of the homicide statistics were updated by The Washington Post after the commission's survey collected preliminary numbers.

The nation's three largest cities saw sizable homicide increases last year. Chicago's total soared by 55%; New York City by 45%; and Los Angeles by 38%. In the 34 cities of the survey combined, from New York (population 8.4 million) to Norfolk, Va. (population 245,000), a total of 1,268 more people were slain last year than in 2019. Seattle, Memphis, Austin and Phoenix all saw homicide totals rise by more than 40% last year.

In D.C., homicides rose 19% in 2020, from 166 to 198, a 16-year high and the third straight year of increases. Experts said that pandemic-related unemployment created stress and that with schools and community programs shuttered or moved online, safety nets were limited for young people.

In D.C.'s Maryland suburbs, homicides rose nearly 30% in Prince George's County, from 74 to 96, while Montgomery County reported 15 slayings in both years. Homicides in northern Virginia - Fairfax, Prince William, Loudoun and Arlington counties, and Alexandria and other smaller cities - declined from 38 in 2019 to 36 last year. Homicides in Baltimore dropped from 348 in 2019 to 335 last year.

"Urban gun violence is a uniquely persistent and durable force, which involves shootings between young men without a lot of hope or economic opportunity," said Abt, the author of "Bleeding Out: The Devastating Consequences of Urban Violence - and a Bold New Plan for Peace in the Streets."

He noted that much of the shooting is "driven by a very small number of people in a very small number of places," labeled "hot spots" by police. "Evidence-based strategies" to reduce that violence depend "on getting face-to-face with these guys. And it's not just about policing." Violence interrupters, outreach workers and other social service providers "can't get in touch with these people anymore, and with that abrupt pullback, there's fewer incentives for these guys to change their ways, which leads to more violence."

Rosenfeld said that "the pandemic has done a number on local police departments." Between officers quarantining, reduced staffing levels and increased social distancing, "that reduces the kind of proactive policing that the research shows does reduce violence." Rosenfeld and other police experts noted that reassigning officers away from patrol duties to handle protests can further reduce police presence.

The episodes of police violence, now more widely publicized through social media, may also be reducing police legitimacy in some communities, Rosenfeld said.

"That leads to reducing cooperation with police, which leads to less crime being solved," he said, "and may be encouraging people to take disputes into their own hands."