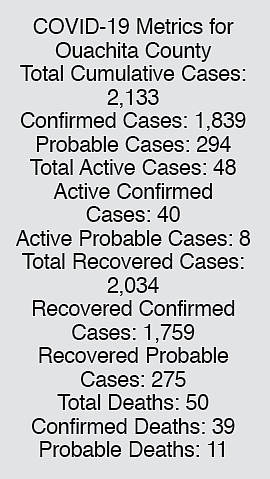 LITTLE ROCK — The number of coronavirus cases in Arkansas rose by more than 280 on Sunday and the death toll increased by nine, according to the state Department of Health.

The department reported 284 new cases for a total of 315,514 since the pandemic began and that 5,357 people have died of COVID-19, the illness caused by the virus.

The number of people hospitalized in the state with the virus fell by 28 to 577.

On Sunday, Gov. Asa Hutchinson visited a pharmacy in Bryant to discuss vaccine distribution. He had urged vaccine providers on Friday to schedule extra hours this weekend to make up for a slowdown because of last week’s snowstorms.

The Arkansas Department of Health reported that more than 9,500 vaccine doses were given on Sunday.

More than 515,000 vaccine doses have been given in Arkansas.

The seven-day rolling average of new Arkansas cases has fallen during the past two weeks, from 1,737 per day to 443.6, according to data from the COVID Tracking Project.