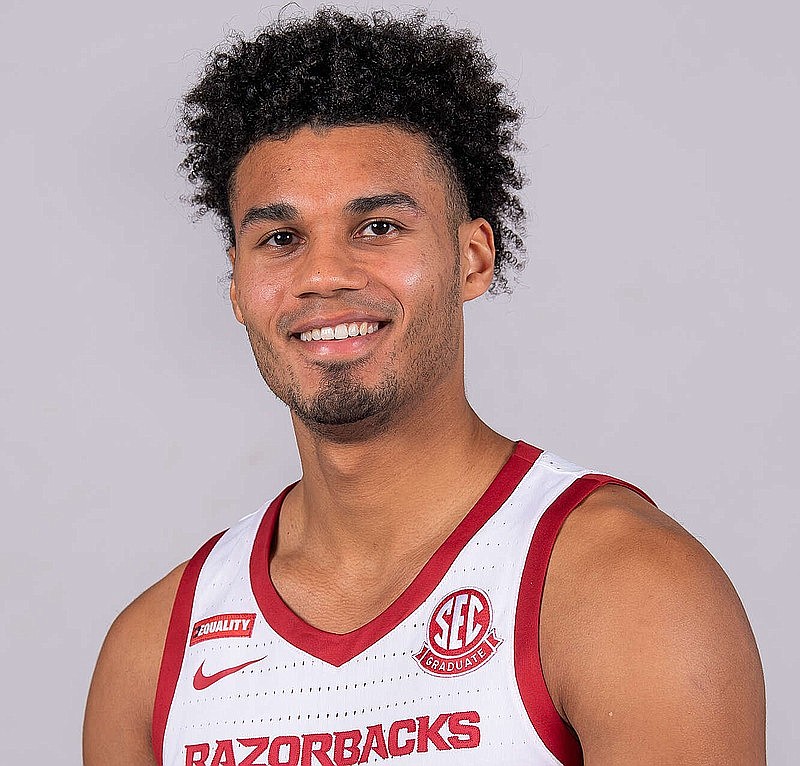 FAYETTEVILLE -- Eric Musselman said that in four seasons as Nevada’s basketball coach, the Wolf Pack had no injuries.

It’s been a different story in Musselman’s two seasons as the University of Arkansas coach.

For the second consecutive season the Razorbacks will have to play several games without one of their best players.

Last season it was guard Isaiah Joe. This season it is forward Justin Smith.

Arkansas struggled to win without Joe, going 1-5 when he was out because of a knee injury, including five consecutive losses in SEC play after he underwent surgery.

The Razorbacks’ only victory without Joe -- an NBA rookie with the Philadelphia 76ers -- came at home against TCU in the SEC/Big 12 Challenge.

Arkansas (9-1, 1-1 SEC) is off to a tough start without Smith, losing 81-68 to No. 12 Missouri on Saturday in Walton Arena in the first game the 6-7 senior missed after undergoing ankle surgery on Friday.

Going on a three-week timetable for Smith to return, he would miss five more games. Then it would be two more missed games for each additional week he’s out.

Arkansas plays at No. 7 Tennessee (7-1, 1-1) on Wednesday night in Thompson-Boling Arena. The Vols lost 71-63 to Alabama at home on Saturday after opening SEC play with a 73-53 victory at Missouri.

“There’s no excuses -- none,” Musselman said of playing without Smith. “It’s on me to try to figure it out. And we’re not going to have it figured out by Tennessee, I promise you that.

“It’s going to be a process, just like it was last year when Isaiah was out.”

After Smith was injured in Arkansas’ 97-85 victory at Auburn on Wednesday night, 6-9 senior Vance Jackson started the second half in his place.

But Jackson -- who played 11 minutes in the first half -- came out with 18:34 left in the game and didn’t return with guards JD Notae and Davonte Davis getting the majority of minutes with Smith on the bench in a boot on his right foot.

Notae finished with 21 points and Davis with four. Jackson didn’t score and was 0 of 2 from the field.

Davis started against Missouri and played 20 minutes and had 4 points, 4 rebounds and 3 steals, while Notae had a team-high 19 points off the bench. Jackson played two minutes and didn’t attempt a shot.

Arkansas freshman forward Jaylin Williams, who played 17 minutes against Missouri and had 8 points, 3 rebounds, 2 blocked shots and 1 steal, is another option for Musselman to consider to help fill the void left by Smith’s absence.

“Everybody has to step up,” said Razorbacks freshman guard Moses Moody, who had 18 points and 10 rebounds against Missouri. “One person can’t take on Justin’s whole role.

“Everybody’s got to take a piece, get a couple extra rebounds, protect the rim. We’re going to have to change a little bit the way we’ve played so far, because we’ve had him thus far. We’ve got to make those necessary adjustments to prevail in the future.”

Musselman said the coaching staff and players can’t be concerned about how long Smith is out.

“He’s got to do his rehab, and we’ve got a lot of stuff to figure out over the next five or six games,” Musselman said. “We’re going to be tinkering, changing, trying to figure it out. Because what we did [against Missouri] did not work.”

Missouri Coach Cuonzo Martin can relate to Musselman’s challenge of adjusting without key players because of injuries.

The previous three seasons the Tigers had injured players miss a combined 134 games, including brothers Michael and Jontay Porter -- both now in the NBA -- out for 62 games.

Missouri senior forward Jeremiah Tilmon, who missed 14 games last season with a foot injury, including both games against Arkansas, overpowered the Razorbacks on Saturday with a career-high 25 points and 11 rebounds.

Tigers senior guard Mark Smith, who missed three games against Arkansas among the 20 he was sidelined for the previous two seasons, had 12 points and 11 rebounds on Saturday.

“He’s [a] good player, but if you write that, it’s the same thing as us missing Mike Porter, Jontay Porter, Jeremiah Tilmon,” Martin said of Smith’s absence. “I know what it’s like to be missing a good one.

“You’re talking about a guy who’s the potential No. 1 pick in the draft [in Michael Porter], and his brother, if he’s healthy, is in the top five of the draft. Imagine missing that.

“That’s a lot of product you’re missing. So I feel sad for [the Razorbacks missing Smith] because I’ve always been a guy who wants to go to battle with other team’s best personnel.”

The Razorbacks particularly missed Smith’s presence inside as the Tigers had a 51-35 edge in rebounds and outscored Arkansas 34-22 on points in the paint.

“Everybody wants an opportunity, everybody thinks they’re real good, so go do something,” Mussleman said of other Razorbacks getting their chances to play. “We shot 26% from the field.”

Musselman was asked if he feels good the Razorbacks can figure out how to win without Smith after they were 0-5 in SEC games without Joe.

“The MRI found something, which most MRIs do,” Musselman said. “And so he had the surgery.