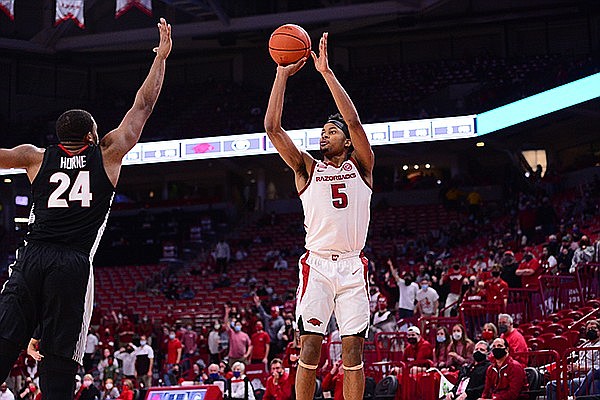 Moody finished with a game-high 25 points and Davis contributed 20 on 9 of 14 shooting in his second career start. Davis also added seven rebounds and six assists.

Vance Jackson, in his first start since the season opener against Mississippi Valley State, scored 15 points and hit 4 of 5 3-pointers in the win. Jalen Tate tallied a 15-point, 10-assist double-double.

JD Notae scored nine of his 12 points in the second half. The Razorbacks assisted on 24 of their 36 buckets against Georgia.

Andrew Garcia and Toumani Carter led the Bulldogs with 15 points each. Camara fouled out midway through the second half.

We will have much more from today's game later on WholeHogSports.com.

Moses Moody, Devo Davis and Jaylin Williams have been awesome today for the Razorbacks.

Davis and Moody have scored a combined 45 points on 18 of 28 from the floor, and Williams has been terrific on the backboards. Georgia came into the game as a really strong offensive rebounding team, but Williams has helped keep the Bulldogs in check there for the most part. He has nine rebounds today, a game high.

Jalen Tate has another double-double with 15 points and 10 assists. Arkansas has outscored Georgia by 26 with him on the floor today. The three freshmen are all at least plus-29.

Devo Davis with a great steal and score on the other end to push Arkansas' lead to 27. JD Notae then drew an offensive foul on a Bulldogs player.

Eric Musselman then walked out to the lane and fired up the home crowd as the teams went to their respective benches.

Pretty impressive stretch offensively for the Razorbacks. Arkansas got 3s from Vance Jackson and Moses Moody, two scores from Jalen Tate and another bucket from Moody cleaning up a Davonte Davis miss.

Moody has a game-high 21 points for the Razorbacks, Jackson has 15, Davis 14 and Tate 12 to go with six assists. He will be at the line when play resumes after shot faking his defender off the floor, drawing contact and getting a layup to go.

Arkansas is plus-17 with Jaylin Williams on the floor. He has a team-high seven boards - four offensive.

Bulldogs forward Toumani Camara just picked up his fourth foul attempting to keep Jaylin Williams from getting to the rim off the bounce. Camara leads Georgia with 12 points on 5 of 11 shooting.

No other Bulldogs player has more than one foul.

Devo Davis and Moses Moody have 14 points for Arkansas, and Vance Jackson has 12. Jalen Tate has added eight points and six assists today. Really nice job from him sharing the ball once again. He had six assists on Wednesday at Tennessee.

Vance Jackson has the Razorbacks' last four points, splitting a pair of free throws then knocking down a right-corner 3. He has hit his last four shots from that spot and is now 10 of 17 from 3 on the right side of the floor this season.

Devo Davis, Moses Moody, Jalen Tate and Jaylin Williams each have scores, too. Williams caught on the left block, took his time then finished with a right flip shot from six feet. He has great touch around the rim.

Connor Vanover gave up a bucket defensively on Georgia first possession of the half. He was subbed out 64 seconds into the half. Vanover has played three minutes today.

Great half of basketball from Devo Davis in his second career start. He provided the Razorbacks a big lift in the early stages, and he is the team's co-leading scorer at the break with 12.

Davis hit 5 of his 6 shots, including all four inside the arc, grabbed five rebounds and handed out a pair of assists. He found Desi Sills for a layup in the final minutes.

Had to be nice for Sills see a ball go down after his struggles the last couple games. He is 1 of 3 from the floor with three rebounds and a pair of assists in 12 minutes.

Moses Moody has 12 points. He is 3 of 5 on shot attempts inside the arc after entering this game 2 of 16 on 2-point looks in SEC play. He made his first two then went 1 of 3 to cap the half. Arkansas has outscored Georgia by seven points with Davis and Moody on the floor.

Jaylin Williams, who has three rebounds, two turnovers and one steal at the break, was plus-9 in the first half.

Sahvir Wheeler and Toumani Carter lead the Bulldogs with 10 points each. Georgia is shooting 48.3% for the game and has finished 8 of 13 layups to this point.

Arkansas is 4 of 12 on layup attempts, according to StatBroadcast. JD Notae missed all three of his 2-point looks and Vance Jackson, who has eight points on a pair of 3s, is 1 of 5 on the interior.

The Razorbacks used a 7-0 run behind four points from Moses Moody and a triple from JD Notae to grab an eight-point lead, but the Bulldogs have answered back.

Georgia just reeled off six in a row, punctuated by a Toumani Camara finish on an oop from Justin Kier. Camara has 10 points for the Bulldogs, as does Sahvir Wheeler.

Devo Davis still has a team-high 10 for Arkansas. Moses Moody has seven, and Vance Jackson and Jalen Tate have six each. Razorbacks are shooting 40% today.

Pretty good stretch there from Vance Jackson. He knocked down a 3 from the top of the key, where he is 3 of 6 for the season - and the left wing. It was his second made 3 in 16 attempts on the left side of the floor this year.

He also took a long 2 in the corner I wasn't crazy about, but he has again provided some perimeter pop.

Moses Moody connected on a pair of free throws after attacking the rim following an advance pass from Jackson. He has five points and is 3 of 3 at the line.

Desi Sills has not scored and has not attempted a shot in his eight minutes on the floor.

Toumani Camara and Sahvir Wheeler lead Georgia with eight points each. Arkansas has been unable to keep Wheeler in front at any point in this game. He is a jet with the ball at 5-10, and he's strong enough in the upper body to finish through contact.

Devo Davis is leading the Razorbacks' charge offensively so far. He has 10 of the team's 19 points. Davis knocked down a jumper than a left-corner 3 between the media timeouts. He also has three rebounds in his nine minutes.

Moses Moody just canned a nice jumper from the right short corner. It's only his third 2-point bucket in SEC play. He came into the game 2 of 16 on attempts inside the arc. That's a good sign for him. He was, though, just hit with a terrible foul call attempting to go over the top of a Georgia player for a steal.

Moody, Davis and Jalen Tate have all of Arkansas' points.

Toumani Camara has been the Bulldogs' only offense to this point, but he's been really solid in the early going. He has hit 2 of 3 from deep and added a layup. He knocked down the first two 3s with Connor Vanover in the game, and Vanover was quickly yanked and replaced by Jaylin Williams.

Devo Davis is off to a good start. He has five points at the first media timeout, recording an and-1 for the team's first points then later adding a floater in the lane in transition. He showed great patience in that sequence and didn't force anything.

The defense gave him the short floater and he took it. Great job by him.

Jalen Tate also has four points for Arkansas. He hit a 3 and split a pair of free throws. He'll be at the line when play resumes.

Fourth different starting lineup in as many games for the Razorbacks. This group has not played together all season, according to HoopLens. Jackson has averaged 11.5 points and shot 38% from 3 in his career as a starter. Second career start for Davis.

Moody will be looking for a bounce-back performance against the Bulldogs after failing to reach double figures in scoring at Tennessee. He finished with six points and knocked down just 1 of 8 shots. Moody is 2 of 16 on shots inside the 3-point arc in conference play. That needs to improve.

Could today be the day Desi Sills breaks out of his two-game slump? He has not been himself over the last week, scoring six points in two games on 1 of 11 from the floor. The Razorbacks badly need his energy and presence on both ends in what feels like a must-win game ahead of road trips to LSU and Alabama next week. He will begin today's game on the bench.

JD Notae is averaging 15.7 points per game this season, just behind Moody, who sits at 15.9. Notae is shooting 43% from the floor this season and 31.3% from 3-point range. He turned in his most efficient offensive game Wednesday against the Vols. In Arkansas' last six games, he is putting up 19.2 points per game. He has added at least 19 points in each of the last four games.

Tate pitched in 15 points and six assists - his most since the UCA game - on Wednesday. He is assisting on 26.6% of the Razorbacks' scores when on the floor this season, and 25.2% in conference games.

Freshman guard KK Robinson (foot) is not dressed out and did not take part in warmups today. Richard Davenport wrote on our message board that Robinson will miss today's game and have surgery on his foot.

Offensively, the Bulldogs have been OK, but they are not valuing the basketball, turning it over at a 23% clip. Mississippi State and LSU came up with a steal on 16.8% of Georgia’s offensive possessions. That mark, as you would expect, ranks last in the conference.

Sophomore guard Sahvir Wheeler steers the ship for Georgia. He has played 94.1% of the team’s minutes in league games and has the second-best assist rate in the SEC at 35.8%. He will enter Bud Walton Arena on Saturday averaging 7.7 assists per game.

Wheeler has finished with seven-plus assists in six games this season. He’s been great setting up teammates. He is, though, a bit turnover prone. Wheeler has at least four turnovers in every game.

It would also be wise for the Razorbacks to keep Toumani Camara (6-8), Andrew Garcia (6-6) and Tye Fagan (6-3) off the offensive glass. Camara has grabbed 11.8% of available misses when on the floor in SEC games, and Garcia has grabbed 11.2%.