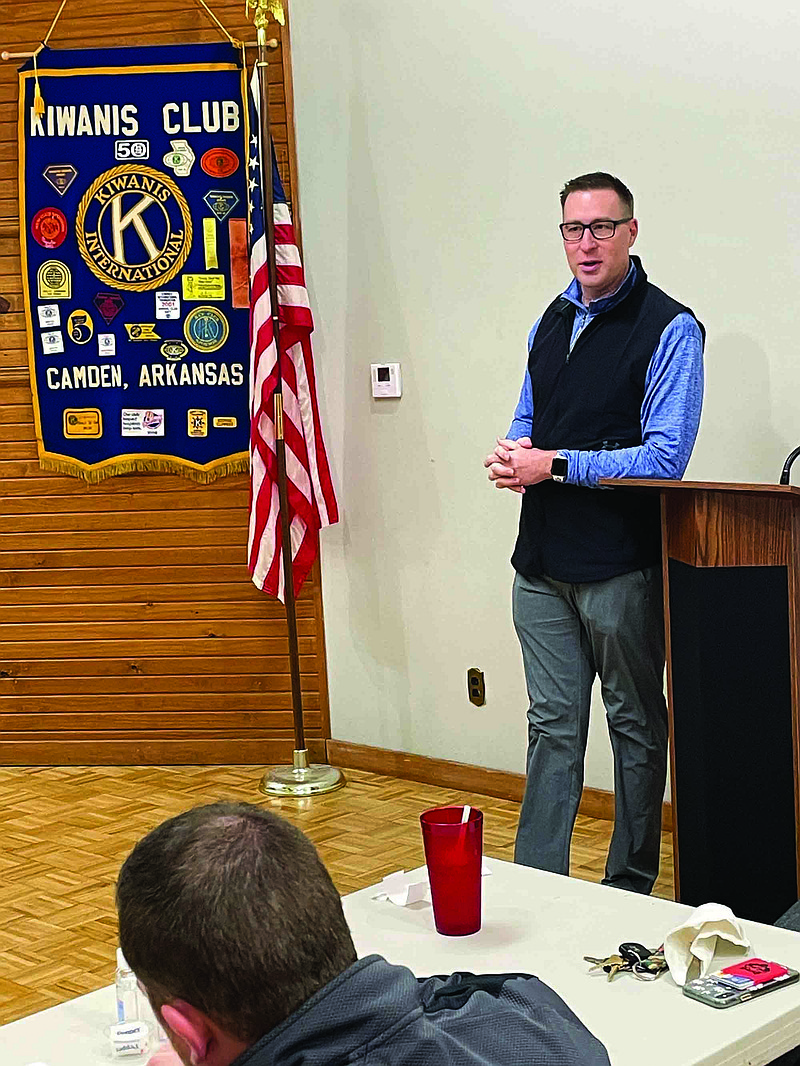 The Camden Kiwanis Club welcomed Eric Akin of the Fellowship of Christian Athletes and Danny Rivers to its meeting recently. The pair talked about the need to fill a position in the region and the importance and mission of the organization. - Photo by Patric Flannigan

CAMDEN — The Camden Kiwanis Club welcomed Eric Akin of the Fellowship of Christian Athletes and Danny Rivers to its meeting recently. The pair talked about the need to fill a position in the region and the importance and mission of the organization.

Akin spoke first and thanked the Kiwanis Club for the job they do. He shared a story of how he and his family had fallen on hard times during the holidays and a member of a civic organization similar to the Kiwanis Club stepped in to make sure Christmas presents were provided for his family.

“Two words: But God,” Akin said describing the hardships his family faced while they were planting a new church in Texas. “God takes care of his people and takes care of those who will trust him with everything… I’m forever indebted to clubs like this because I’m thankful that you are making the difference in peoples lives more than you’ll ever know.”

Akin then talked about the Red River area of FCA which consist of about 150 campuses across North Texas and South Arkansas. Former FCA Representative David Preston went into business with his brother’s start up company and now FCA is looking to find a replacement.

He explained that an FCA Rep’s job is to help coaches and athletes better use their influence to spread the gospel and to be directly connected with the local high school and sports communities.

“Everyone knows the coach has the influence,” Akin stated. “Many of you probably played sports you and you went home and told your parents that you had to be at the field house at 7:15 a.m. and the bus leaves at 7:30 a.m. and your mom would ask you knew and you would say, ‘Coach said.’”

Akins then talked about the shortage of vocal leaders and how a lot of selfishness is seen in sports now because of parents trying to liver their lives through their children.

FCA has hosted “Fields of Faith” over the last six or seven years in El Dorado where over 11000 student athletes attend and over 100 decide to give their lives to Christ annually. Akin said that the event was held virtually last year. Another event FCA is planning for the first week in June is the FCA All Star Show Down. Akin said FCA is in the process of securing housing from Texarkana A&M for the event where there will be Arkansas vs. Texas games in basketball, baseball, softball and football game.

Rivers then spoke about being in FCA when he was in high school in Orlando Florida and how powerful it is to see children find their confidence in Christ.

“You ask a kid to stand up and share his favorite bible verse, and you know public speaking is hard,” Rivers shared. “But seen how good he feels afterwards and just the confidence he gains. It’s a good feeling. That’s some of the things we do.”

Rivers talked about how a student athlete can invite the opposing team to pray with them after a game or invite a math teacher to share their story during an FCA meeting.

“As long as it’s student led then it can happen,” Rivers stated. “FCA may be the only way left that you can share the gospel in school.”

To find out more about the Red River FCA and donate to their cause, visit www.rrfca.org.