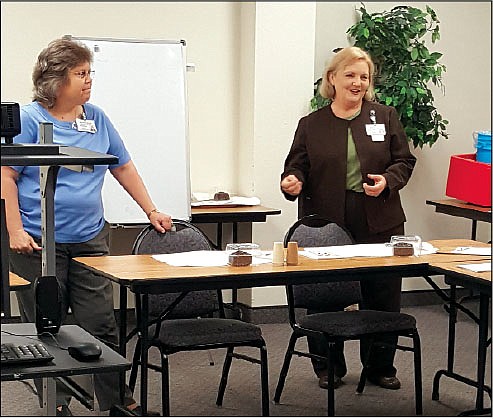 CAMDEN — The Nielsen company, which measures consumer behavior, reported recently a 54% increase in alcohol sales for the week ending March 21, 2020, compared with a year before, and an increase of 262% in online sales from 2019 as stay-at-home orders began in some U.S. states to mitigate the COVID-19 pandemic.

For those who feel that their drinking or any other substance abuse has become a problem, Ouachita County Medical Center offers a solution in its comprehensive Chemical Dependency Unit.

“The chemical dependency unit opened in 1985 and our administration and board of governors wanted to provide our community and county with a private treatment program that was reasonably priced,” Unit Director Teresa Roark said. “What ended up happening was, not only did we serve the community and county, but we serve the entire state. I even have people that fly from various states across the country to come to our treatment program.

“We treat people from a wide range of disciplines and occupations; I’ve treated physicians, I’ve treated attorneys, judges, nurses, police officers, fireman. Any profession you can name we’ve probably had someone here,” she added.

“It’s best described as a center of excellence, we provide a wide array of treatment. We’re really a cut above other treatment programs in quality and innovation. For example, we have medical detoxification. We have our inpatient program, we have partial hospitalization program,” Roark said.

The program has flourished and grown to be nationally recognized.

“Never in our wildest dreams did we ever think that our program would explode like it did,” Roark said. “We have an aftercare program that patients transition to once they complete their treatment regime. We meet twice weekly. It is a continuation of group therapy and it is a free service for a lifetime. We recommend people stay in aftercare for at least a year.”

Roark noted that some people stay connected with the program for years in order to access the resources.

She said, “I’ve got people who have 27 years of sobriety that still come to aftercare.”

Roark stressed the importance of aftercare, but also highlighted a critical point in recovery that often leads those with substance abuse disorders down a dangerous path;

“Managed care really started impacting substance use disorders programs in the 1990s that continued to evolve. We’ll pay for medical detoxification and then they have to go to a level of outpatient care,” Roark said.

“If they were detoxed, an appointment would be made to see a therapist and from the time they are detoxed to the time they make that appointment, they’ve relapsed. So we didn’t want to be a treatment program that, if you lived in Ft. Smith, we set you up with a therapist and say good luck. Because they aren’t really stable,” she continued. “Physically they are stable with detox, but emotionally they are not. So what we did with our treatment program, consulting with the Arkansas Department of Health, we delicensed some of our rooms. In that level of care, they do not pay for room and board, they only pay for treatment.

We didn’t want them to fall through the cracks. Some of them live too far to drive back and forth. Some of them, the environment at home may just a little too much to go back to,” she said.

She also noted that discreetness is a major component of the program.

Roark stated, “We receive referrals from industry. I have even treated a couple of NFL football players before.

“Just to tell you how private we are, CDU doesn’t even have Caller ID, something people have had for many years now. We don’t care to have it. We want people to feel comfortable in calling us without us having to know their name,” she added.

Roark said not everyone has the same experience with the program and ” we don’t believe that one size fits all, but usually on average it’s four weeks.”

She said involvement of patients’ families is a critical part of the recovery process.

“Another key component for us is that we involve the family. Typically for us, we do three formal family sessions a week and then we work with the patients and their loved ones on an individual therapy session as well, because some things they just don’t feel comfortable talking about in a group,” Roark said.

She noted that the number of visitors has been scaled back since OCMC has changed its policies on visitation, but noted that the policy was temporary in nature.

With the start of the New Year, many people look to make a change in their lifestyle and they reach out to the CDU for help with that, she said.

“After New Years, their New Years resolution is to quit drinking or quit doing drugs, and they go through withdrawal, so we do see an uptick during that time,” Roark said. “Alcohol is typically the number one substance of addiction. Why is that? It’s more socially acceptable. It’s fairly inexpensive as compared to other drugs.”

She said that the unit was aware of the opioid crisis well before it was ever nationally addressed.

“We actually had identified that a number of years ago. Probably about 15 (years ago) we noticed a trend; officially when the government said ‘Hey, this is a real problem’ was probably about seven or eight years ago, but we had identified it some time back. There are one or two years that opiates had surpassed alcohol and that’s unusual, but it happened,” she said.

In 2021, the CDU is facing a new problem: the potency of medicinal marijuana.

“We are seeing a growth in marijuana. The marijuana we have today is a lot different that ’60s, ’70s, ’80s and ’90s. Typically the THC, which is the chemical compound that causes a person to be high, is 6 to 9% in its natural state. The marijuana today we have that’s cultivated is 90% and up,” Roark said. “It is actually causing hallucinations and psychosis. We refer to it in our industry as a ‘dream crusher.’ Marijuana taps serotonin, so we’re seeing people with so much incredible potential not achieve their goals. Most people do not realize that about marijuana.”

Roark said some signs of substance abuse include:

She said that facing addiction is not easy, but CDU is there to help the community and nation.

“It’s like coming out of the darkness, and addiction is a very dark place, and a very frightening place,” she said.

Admission to Ouachita is a simple process. A counselor is available 24 hours a day for assistance and to answer any questions. All inquiries are confidential. For further information or to speak with a counselor call (870) 836-1289 or (800) 232-1289.