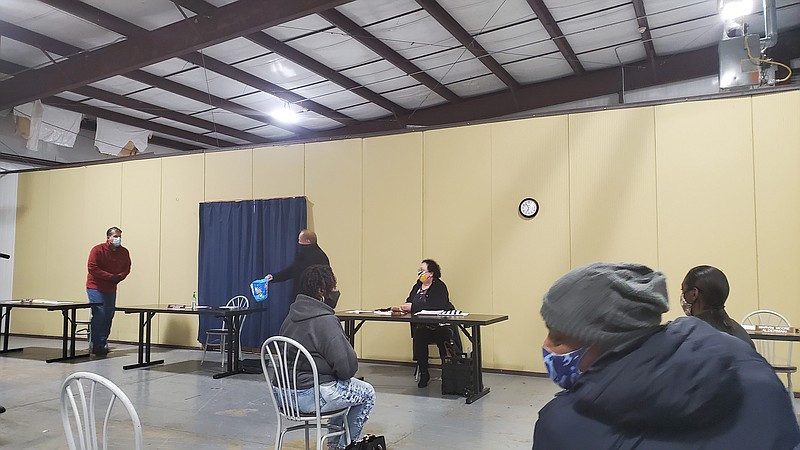 Photo by Bradly Gill The Camden City Council board of alderman meeting was held in the warehouse of the business incubator building Tuesday night in order to meet COVID-19 restrictions.

The Camden City Council held their regularly scheduled Board of Aldermen meeting Tuesday night, but not in the usual meeting place of City Hall.

The meeting was moved to the business incubator warehouse in order to comply with the Arkansas Health Department’s COVID-19 guidelines.

During the Mayor’s Report, Executive Director of the Ouachita Partnership for Economic Development James Lee Silliman approached the Board about replenishing OPED’s incentive funds from the dedicated economic funds set aside from the city.

Silliman explained that the funds were generated by a sales tax passed in the 2000’s.

OPED recently reimbursed Aerojet Rocketdyne $90,000 for workforce training conducted at SAU-Tech, Silliman said, and Lockheed Martin is expected to complete another $90,000 worth of training.

Siliiman asked the board to allocate $180,000 so that OPED could replenish its economic incentive funds.

“When a company locates to or expands in your area, obviously the state Economic Development office offers incentives to entice the company to locate to your area. They expect the local community to participate. The state puts up multi- millions of dollars in incentives and tax abatements to get those jobs in the state of Arkansas and that particular community,” Silliman said.

He noted that Highland Industrial Park employs large numbers of Ouachita County residents and companies like Aerojet and Lockheed are a big part of Camden’s economy.

No further action was taken with no discussion from the council.

A resident went before the City Council in December and asked that she be allowed to place a manufactured home on the spot were her house had burned down. She previously spoke with the Planning and Zoning Commission, which approved the plan. The rules were suspended and the ordinance was put up for a third reading and passed unanimously.