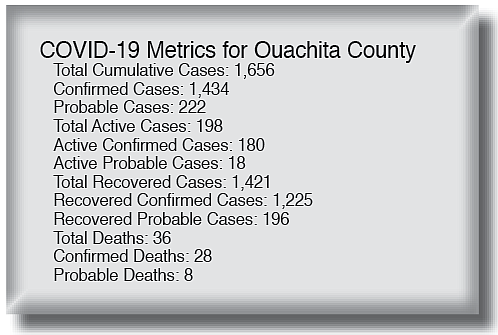 CAMDEN — Arkansas’ count of coronavirus cases rose Thursday by 2,491 — the fourth daily increase in a row that was smaller than the one on the same day a week earlier.

Meanwhile, after reaching highs earlier this week, the number of coronavirus patients hospitalized, on ventilators and in intensive care units in Arkansas all fell.

The state’s death toll from the virus, as tracked by the Department of Health, rose by 42, to 4,228.

“We also saw a decrease in hospitalizations and ventilator usage. This will relieve some of the strain on our health care system as we continue to distribute vaccine doses.”

After rising Wednesday, the number of patients hospitalized with the virus fell Thursday by 67, to 1,295.

That was the first time that number had dropped below 1,300 since the threshold was first crossed Jan. 5.

The number of virus patients on ventilators fell by 14, to 241, while the number in intensive care units fell by six to 426.

The number of cases that were considered active also fell, from 25,095 as of Wednesday to 24,740 as of Thursday, as 2,804 Arkansans were newly classified as having recovered.

After peaking at 3,086 Sunday, the average number of cases added to the state’s tallies each day over a rolling seven-day period fell Thursday for the fourth-straight day, to 2,656.

“It’s nice to see the cases lower than they have been recently,” state Epidemiologist Jennifer Dillaha said.

“It gives me a lot of hope that people in Arkansas are really doing their best to prevent the spread.”

She said the decline in the state’s active case total, which was down from a peak of 27,822 as of Saturday, was also an encouraging sign.

While the state this week entered its fifth week of administering coronavirus vaccines, Dillaha said it was too early for those to be having an effect on the state’s case numbers — at least directly.

“There’s not enough vaccine being distributed to make a difference on spread right now, but it could be that people are encouraged enough that the vaccine is available, that there’s light at the end of the tunnel, so that they can have the stamina to keep going with their wearing a face mask, social distancing, avoiding unnecessary activities and not getting together in small groups,” Dillaha said.

“Maybe it’s more motivating to do that knowing that there’s hope on the horizon.”

With the state preparing to enter a new phase of its immunization plan next week, the University of Arkansas for Medical Sciences announced Thursday that it will begin holding a vaccine clinic next week for people age 70 and older, and for employees of elementary and secondary schools, higher-education institutions and child care centers.

Those population groups, among those that fall under Phase 1-B of the state’s vaccine plan, will become eligible for the shots starting Monday, although the clinic won’t start until Tuesday.

“We have been eagerly anticipating this day for many months and are thrilled to join hospitals, community pharmacies and other health care facilities across the state to begin protecting Arkansans from the COVID-19 virus,” said UAMS Chancellor Cam Patterson, a cardiologist, said in a news release.

The clinic at the Freeway Medical Tower in Little Rock will be open by appointment only, starting Tuesday, from 9 a.m.-4 p.m. Monday through Friday.

The university, which is administering the vaccine developed by Pfizer and BioNTech, expects to be able to vaccinate 315 people a day, spokeswoman Leslie Taylor said.

Appointments will be scheduled for the second dose of the two-shot regimen at the time each person receives the first dose.

“Front-line essential workers,” such as those working in factories and grocery stores, also fall into Phase 1-B of the state’s vaccination plan but won’t be eligible for the shots until later, state officials have said.

Taylor said the clinic will continue as long as it’s needed.

“As it goes out further to other groups, I’m sure we’ll help with that as well,” she said.

Under the first phase, 1-A, of the state’s vaccination plan, focusing on health care workers, first responders, and residents and workers at long-term-care facilities, the university had administered shots as of Thursday to about 6,000 of its employees, as well as to students who have patient-care responsibilities.

That total included about 4,000 who had received both doses. The vaccinations were ongoing Thursday, Taylor said.

She said the UAMS Medical Center had 60 covid-19 patients Thursday, including 14 who were in the intensive care unit.

The unit was on “ICU max status, which means we’re not accepting outside transfers,” she said.

“We do have some beds available that we’ll use for patients in-house that might need an ICU.”

According to the U.S. Centers for Disease Control and Prevention, at least 108,316 Arkansans had received at least one dose of the Pfizer or Moderna vaccine as of Thursday.

West Virginia had the highest rate, 6,621 doses per 100,000 residents, followed by South Dakota and Alaska.

Dillaha said the number for Arkansas “sounds pretty accurate,” and she was pleased with the state’s ranking given that it has distributed the vaccines to pharmacies and hospitals throughout the state.

“I’ve heard stories of other states that use their big population centers to have these mass clinics,” Dillaha said. “That drives the number up, but it doesn’t get the vaccine out to the rural communities, which is a little slower and takes a little bit more planning.”

In the long-run, she said Arkansas’ system will lead to “better distribution, because you’ve got a broader, more robust system going,” she said.

“If you’re just going to do big events, those are pretty easy to set up and do a lot of vaccinations, but it doesn’t serve the rural communities and promote the equity that we’re interested in in Arkansas.”

Next week, she said the vaccine will continue to be provided through pharmacies and hospitals, with some hospitals offering it through their clinics.

Some hospitals and pharmacies are planning vaccination events at schools and other locations, she said.

For now, she said, the state is leaving it up to the providers to decide how to allocate the available doses among employees of schools and child care centers and people 70 and over.

“We’re allowing flexibility at the community level, but we will monitor it, and if we need to allocate some doses to one or the other population, we will do so,” she said.

Pharmacies, hospitals and other providers had received 275,000 doses of the vaccine as of Thursday under Phase 1-A of the effort being coordinated by the state.

They reported having administered 112,238 of those, including some second doses for people who received their initial shots earlier.

That was an increase of 9,581 doses from the number that had been given as of a day earlier.

Walgreens and CVS were allocated an additional 49,400 doses for residents and workers at long-term-care facilities in Arkansas as part of a federal program.

Those pharmacy chains reported administering 4,534 doses as of Thursday, an increase of 365 over the total as of Wednesday.

The actual number of shots given is higher than the Health Department’s figures because providers have three days to report the doses they administer.

At a meeting of school administrators Thursday, Hutchinson said making the vaccine available to school employees “will help us to make sure that our classrooms are safe, that we reduce the spread, that we reduce the quarantines that disrupt our education system, and will save lives at the same time.”

State officials have recommended that people age 70 and older contact participating pharmacies to schedule appointments for vaccinations. Teachers and other school employees should contact their employers to get information on how to get the vaccine, officials have said. A list of the pharmacies is available on the Health Department’s website, healthy.arkansas.gov.

“I know that this is an extra burden on you because whenever they ask me, what do you tell the teachers, I said, ‘Well, talk with their superintendents,’” Hutchinson told the administrators.

“And that’s the right place to go because we don’t need all the teachers and staff calling up the local pharmacy and setting up appointments individually. We need that coordinated school by school by school with your local provider.”

He said the vaccination effort is limited by the supply.

Hutchinson said people ask, “Why don’t you just have a mass distribution event?”

“Well, if we had an unlimited supply that we knew and everybody that showed up could get the vaccination, then we would be doing exactly that, hopefully, in an organized fashion,” he said.

But, he said, “We don’t have an unlimited supply.”

“I hope it increases, but as we have that limited supply,” the state has to set priorities, Hutchinson said.

The cases added to the state’s tallies Thursday included 1,735 that were confirmed through polymerase chain reaction, or PCR, tests.

The other 756 were “probable” cases, which include those identified through less-sensitive antigen tests.

Among prison and jail inmates, the Health Department’s count of cases grew by three.

Among nursing home and assisted living facility residents, the state’s count of virus deaths grew by 11, to 1,699.

The number of the state’s virus patients who have ever been on a ventilator rose by 14, to 1,329.

Meanwhile, the Health Department reported that 12% of the PCR tests of Arkansans were positive over a seven-day span ending Wednesday.

That was down slightly from the 12.9% that was initially reported for the week ending Tuesday.

The percentage for that period later rose to 13.4% as more test results were reported.

Hutchinson has said he wants to keep that percentage — a gauge of whether a state’s testing is adequate — below 10%, but it has been above that level since Nov. 28.

The Health Department also reported that 20.9% of the antigen tests performed on Arkansans were positive during the week that ended Wednesday, down from 21.6% during the seven-day period ending Tuesday.

Also Thursday, the Health Department listed the Hooter’s restaurant in North Little Rock as among the workplaces in the state with at least five active cases among employees.

The restaurant had a total of eight cases among workers, including five that were active as of Thursday, according to the department.

Six Tyson Foods plants were also on the list. According to the department, the company had 18 active cases among workers at a plant in Waldron, seven in Van Buren, six in Dardanelle, six in Hope, five in Berryville and five in Clarksville.

The workplaces don’t include nursing homes or other health care providers, schools or correctional facilities because those are included in other reports.

Information for this article was contributed by Michael R. Wickline of the Arkansas Democrat-Gazette.