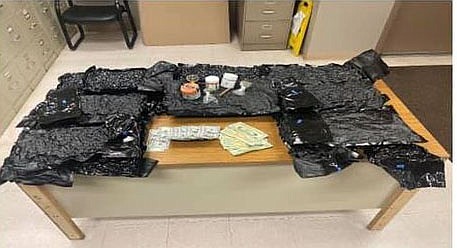 A Camden man was arrested Wednesday on charges of possession of a Schedule VI controlled substance with purpose to deliver after police found approximately 18 pounds of what they believed to be marijuana during a traffic stop on Highway 167.

On Wednesday, Arkansas State Trooper Justin Harper conducted a traffic stop on 167 north of Hampton, according to a press release from the Calhoun County Sheriff's Department. The driver and passenger of the stopped vehicle were identified as Kerry Cunningham, of Camden, and Wallace Lock, of El Dorado, respectively.

Upon identifying the occupants of the vehicle, the ASP officer detected an odor of marijuana and both subjects were asked to exit the vehicle and were detained. A probable cause search was conducted on the vehicle.

According to the Calhoun County Sheriff's Department, police found in a search of the vehicle small amounts of a leafy substance believed to be marijuana, and in a further search found a suit case containing vacuum sealed bags believed to be filled with marijuana.

Members of the 13th Judicial District Drug Task Force, along with Calhoun County Sheriff Vernon Morris and other members of the CCSD were contacted to assist in the investigation.

After further investigation, it was determined that the suit case contained approximately 18 pounds of what was suspected to be marijuana. There was also a total of $3,733 in cash seized from both of the occupants of the vehicle.

Both individuals were arrested and transported to the Calhoun County Detention Center awaiting a first appearance on the charge of Possession of a Schedule VI controlled substance with Purpose to Deliver Greater Than 10 pounds but Less than 25 pounds.