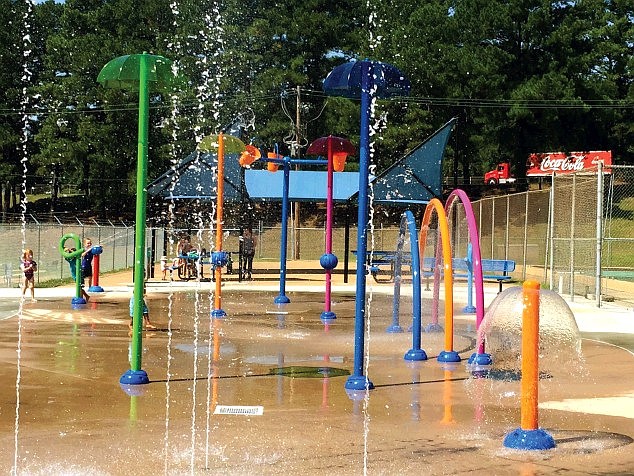 File photo The splash pad at Carne's Park was recently the subject of discussion at Camden's City Council meeting due to budget issues. Director of Public Works Kevin Franklin stated the issue was due to schedule mismanagement and that he cut the staff of the splash pad.

As the council considered approval of June's financial minutes, Alderman L.E. Lindsey questioned the salary of workers at the splash pad at Carnes Park.

The city's Parks and Recreation budget showed that $6,394 was paid out in regular salaries in the month of June.

"The pool's not open, the splash pad is. We're paying $6,400 dollars in salaries for summer. Do we have lifeguards at the splash pad?" Lindsey asked.

Mayor Julian Lott affirmed that there were workers employed at the splash pad.

The financials were approved unanimously.

Lindsey later told the Camden News he was contacted by Kevin Franklin, Director of Public Works on the following Wednesday

"He had looked at the videotape of the meeting and the questions that I asked. He's got reasons why they do need supervision down there he said, 'I did a bad job of the way I scheduled it.' I've made changes to that and the cost will be lower going forward.' I don't know if he had too many people there or too many hours there, " Lindsey said, "His point about vandalism and careless behavior, people going down there and leaving liquor bottles- you're not supposed to have liquor there, if you don't have any supervision, bad things happen down there and I don't much disagree with that at all. "

Franklin later told the Camden News, "That was for a whole quarter. I'll give a little history, normally when the swimming pool is open, my lifeguard will keep an eye on the splash pad. We don't have the pool open due to Covid. We have an actuator pad at the Splash pad, it's a button you push that turns the water on. It cycles the water for three minutes. The button is about a thousand dollars, we have kids that go over there and just hold the button down and it loses control. My first year here we replaced it 10 times, that's around 10 thousand dollars. We have two big drains. I've had kids come in and put trash bags over the drains."

Franklin also noted that people have brought dogs, liquor and other prohibited items to the pad, thus necessitating it be watched at all times by employees.

"We have to have somebody there to maintain some type of balance or it would be complete chaos, what we did we have two or three people, not life guards, not a licensed life guard, just a regular person to sit there and make sure no one brings dogs or alcohol or make sure the bigger kids aren't bullying the smaller kids," Franklin said.

"The only fault I do believe falls in my lap is that I delegated someone to make a schedule for the splash pad...the person I had to do the schedule didn't do a very good job scheduling. Since then, I took over the schedule myself, so you'll see a reflection of that over the next quarterly report, we won't have anyone making that many hours. I don't regret someone being there, I regret the hours they were scheduled to work."

Franklin also said the crew managing the splash pad was cut from 5 to 3.