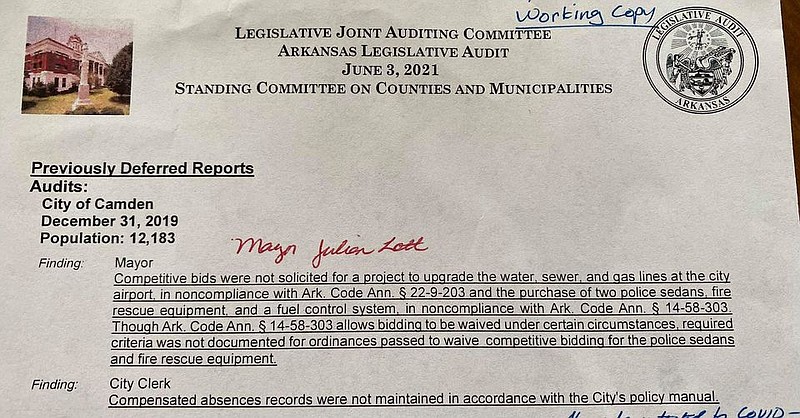 State Sen. Trent Garner, R-El Dorado, who serves as the Chairman of the Legislative Audit Standing Committee on Counties and Municipalities, had strong words for the City of Camden on a Facebook post made Friday afternoon.

Senator Trent Garner posted, “It’s my duty to hold local officials accountable when they violate the code. It is troubling the Mayor of Camden refuses on multiple occasions to explain his actions to the committee.”

The audit, which was performed in December of 2019 stated that competitive bids were not solicited for a water, sewer and gas line upgrade at the city airport and the purchase of two police sedans, fire and rescue equipment and a fuel control system were also not in compliance with a section of state code.

Meetings were scheduled for muncipal and county leaders to meet with Legislative Audit Standing Committee on Counties and Municipalities, with the last one being held on June 3rd .

“At the time of the first meeting, I noticed Camden had a finding and I asked staff what it was and they explained it to me and they invited them (The City of Camden) and the mayor and nobody from Camden showed up, which… It happens, but it’s not routine,” Garner said.

Garner said the issue was deferred to the second meeting, but again, no one showed.

“It’s two meetings in a row and I’d like to get answers. Especially because of some of the issues I’ve heard around Camden with him using a police sedan as his own personal vehicle. That’s why I put that out there; I don’t like being ignored. If they have a legitimate reason I wish they’d let our staff know,” Garner said.

“This could be a normal routine thing. It’s the fact that he’s not showing up that makes me suspicious and in light of some of the recent talk about use of government resources for personal use, that’s a big thing we find in audit. I want him to come and explain to the committee what exactly that means. That’s an important part of my job as a legislator,” he added.

Camden Mayor Julian Lott said that he had shown up to the City of Camden Airport Commission meetings to makes sure they used proper bidding practices and that he had not personally spoken to Garner about the audits and was not aware of the request to appear before the committee.

Lott also noted, "Let me be abundantly clear, I don't have a fight with him (Garner) at all, and if he wants to hold me accountable then certainly the Mayor's Office will be held accountable for the Mayor's office."

Lott then referred the Camden News to City Attorney Michael Frey in the matter, but attempts to reach him failed.