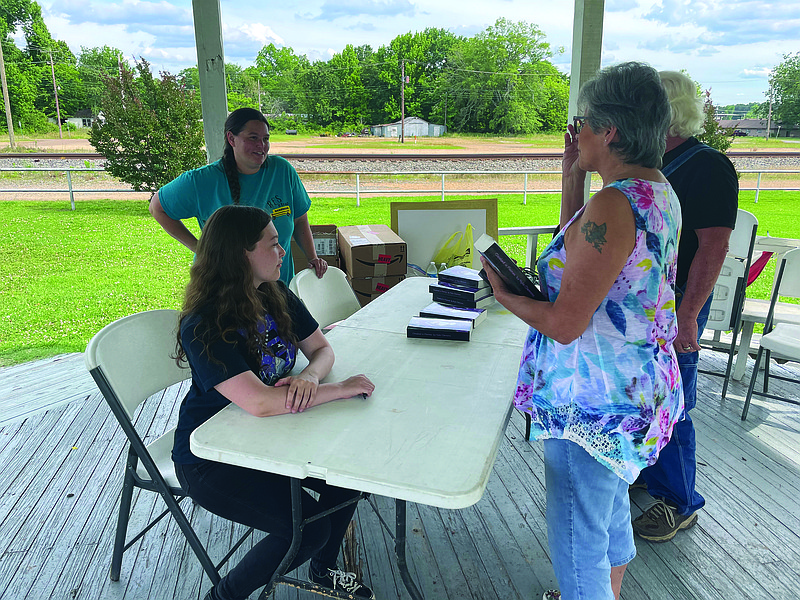 Nyla Clemons, seated, and her mother Melanie visit with attendees during a book signing at the Bearden Gazebo. See related article. Photo by Patric Flannigan

19th century lawyer, politician and Union soldier Eugene F. Ware once said, “All glory comes from daring to begin.” A local youth has embarked on a journey in authorship and is set to share it with the world.

Bearden School student Nyla Clemons held a book signing at the Gazebo recently for her first published book, Cloaked in Flames. The 8th grader was embraced by her family, friends and fans that came out to support.

The Camden News spoke to the young author about the inspiration behind the book and her future plans. Clemons shared the plot of the book came to her in a dream.

“I just thought about my purpose on earth and I was thinking one night about if I wanted to be an author,” Clemons said. “Every since I was little, I always wrote a little more than what was required. Like my teacher would ask me to write a paragraph and I’d write like three pages unintentionally. I was just laying in bed thinking about that one night when I went to sleep and I had a dream. That is the dream.”

The 549 page book has a 5 star rating already on Amazon and a sequel is already in the works. According to Amazon, the plot revolves around an ordinary teenage girl named Nicole who stumbles upon challenges and not so ordinary situations. She wakes up in a strange, new world along with the boy that she had just met who claimed the two had something in common and discovers that she has magical powers. They are sent on a quest to gather a group of other kids each with their own unique powers to fight against an evil force that is causing destruction and agony across the magical world they are trapped in. They must conquer this new world so they can all return to Earth.

“There’s a little something for everyone,” Clemons said in regards to her book. “There’s some romance, there’s mystery, battles and there’s even riddles in there. Mainly it’s about magical powers. So I would say it’s a fantasy or an adventure story. It’s just a big ol’ huge mystery until the very end.”

Nyla’s mother, Melanie, said that Nyla started working on the book three years ago when she was still in fifth grade. She expressed how proud she was of Nyla for being so dedicated and following her dreams.

Cloaked in Flames is available now on Amazon and Google.