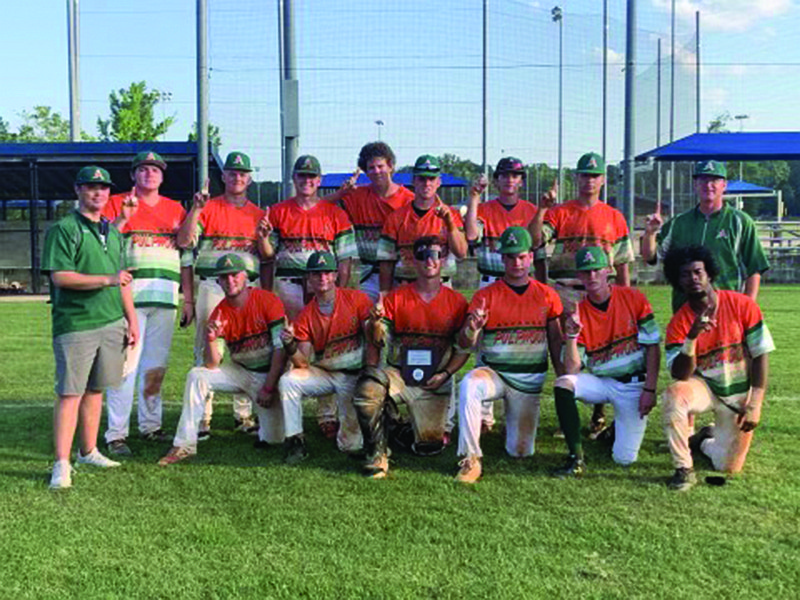 The Arkansas Pulpwood 18U team went 5-0 over the weekend in Bryant to win the USSA 18U Open State Tournament. Logan Robertson pitching 6 innings in the final championship game giving up four hits, two walks along with 7 K’s and 1 earned run leading Pulpwood to a 9-1 win. Robertson also caught the other four wins and had three hits during the tournament to be named Tournament MVP.

Jeffrey Neal led Pulpwood to a convicing 3-1 win in Game 1 of the tourbnament with a complete game 7-inning win, allowing six hits, five walks while striking out 8 and only allowing one run.

Brandon Harris got the win on the mound in Game 3 hurling 3.1 innings and not allowing a hit while walking four and striking out three with no runs.

The Game 4 win saw Pulpwood rely on the arms of Colton DeWoody and Gunner Branch to pick up a narrow victory against the Pulpwood 16’s who were playing up in age group during this tournament. DeWoody pitched 2.2 innings, four hits, five walks, 3 K’s and six runs. Branch finished the game and got the win throwing 2.1 innings of no-hit ball while walking three, striking out 1 and allowing no runs.

Tripp O’Hara provided solid defesne and got two base hits; AJ Smith got a couple of hits and was solid on defesne as well.

Richard Clardy sparked Pulpwood with an RBI double and twin Reschard Clardy got a hit as well.

The Pulpwood older team travesl to Rogers this weekend to compete in the Senior Babe Ruth State Tournament.