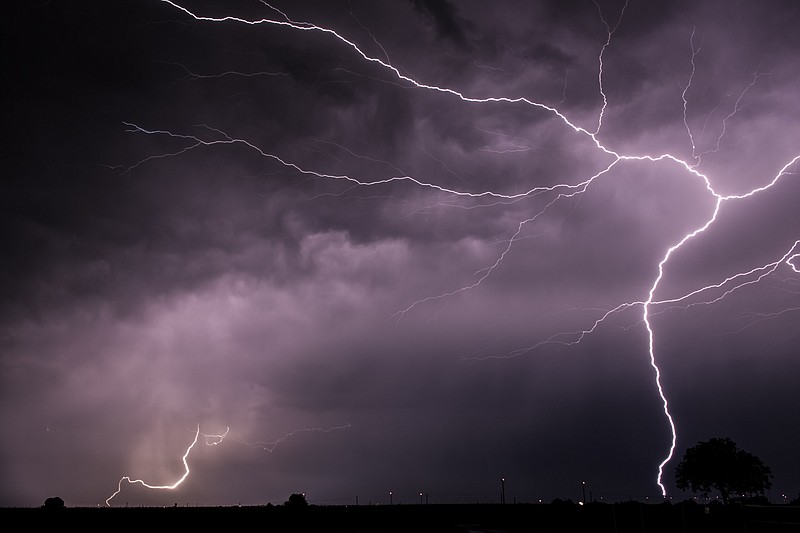 CAMDEN  The National Weather Service, in cooperation with the Arkansas Department of Emergency Management, has proclaimed the week of February 28th through March 6th as Severe Weather Awareness Week in Arkansas.

A different topic will be discussed each day, and today’s topic is Severe Thunderstorms.

A thunderstorm is considered severe when it produces winds of at least 58 mph, hail at least 1 inch in diameter /,he size of a quarter, and or a tornado.

Hail forms in storm clouds where the air is subfreezing. Updrafts which feed storm clouds drive raindrops skyward, and liquid turns to ice. Quite often, hailstones will fall through the cloud, collect water, and updrafts will force them aloft. The stones refreeze and get larger.

Large hail, on average, causes over one billion dollars in damage /property and crops/ in the United States each year. Some injuries due to large hail occur in this country each year, but deaths from hail are relatively rare. Animals fare far worse than humans.

When updrafts are overcome by rain and hail in storms, air from aloft can descend in a hurry. When these downdrafts hit the ground and spread out in all directions, damaging straight-line wind gusts sometimes result.

In 2020, a bowing line of fast moving thunderstorms cut through central and southern Arkansas during the late afternoon and evening of April 12th. There were widespread wind gusts of 60 to more than 80 mph. Numerous trees and power lines were downed, and there was some structural damage. Power was knocked out to at least 150,000 homes. Altogether, there were roughly three dozen instances of gusts of at least 75 mph during the year.

Occasionally, thunderstorms spawn tornadoes. Most of these are produced in the spring and fall during the afternoon and evening. There are 33 tornadoes in a typical year. There were 45 tornadoes locally in 2020, and these resulted in no fatalities.

Two other hazards associated with thunderstorms are lightning and flash floods. However, these are not considered severe.

Whenever thunder is heard, there is lightning nearby. Lightning is deadly, especially in the summer when people are outdoors.

Flash floods are another thunderstorm hazard. Vehicles driven into flooded areas result in the greatest number of flash flood deaths.

Across the country, the top three deadliest thunderstorm hazards in the last 30 years years were flash floods, tornadoes, and lightning, in that order.

• Know the difference between a watch and a warning. The National Weather Service issues watches when conditions are favorable for the development of severe weather. Warnings are reserved for cases where severe weather is imminent or occurring.

• If a Severe Thunderstorm Warning or Tornado Warning is issued for your area, do not hesitate to find a place of safety. If a safe room is not available, the next best location is the lowest floor of a permanent structure in an interior room away from windows. Put as many walls between you and the outdoors as you can.

• Make sure that you have a source to receive the latest information, such as NOAA Weather Radio All Hazards, commercial radio, TV stations or cable TV. Other sources of warning information can include telephone notification services to which people subscribe, pagers and cell phones.