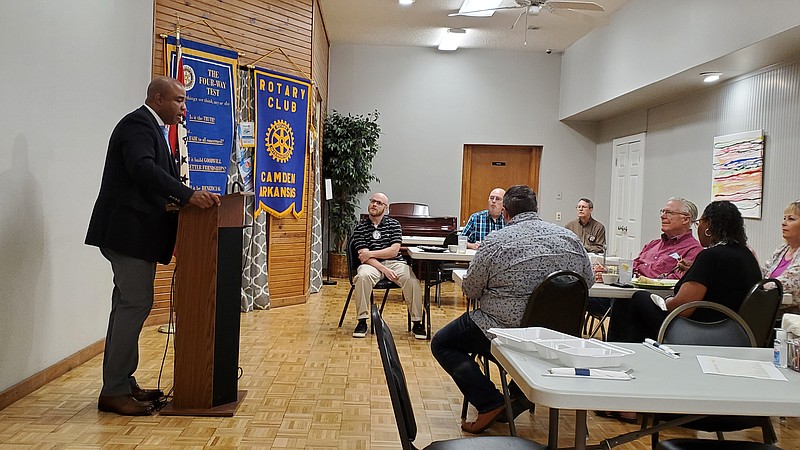 Edward Rice, Vice Chancellor of Student Services for SAU Tech, speaks to the Camden Lions Club about the programs Tech offers its students.

According to SAU Tech’s website, Rice is a native of Greenville, Mississippi and received his associate’s degree from Mississippi Delta Community College in General Studies before going on to complete his bachelor’s degree at Mississippi State University in Public Administration in 1992.

Rice credits his parents for developing his love and appreciation of higher education.

“My mother and father are both retired. My dad worked at the Post Office. My mom worked at a textile plant for 30 years. She started out as a floor worker, moved to an office worker and moved to a lab. Before the plant closed, she was the one that made the dye to dye the carpet,” Rice said. “When I think about education and how important that is, I think about my parents and them instilling in me ‘Boy, you are going to go to college. We didn’t get a chance to go, but you are going to go to college.’”

In January of this year, his nearly three decade-long career in higher education landed him at SAU Tech.

Rice said his brief time at SAU Tech has been memorable, largely thanks to his working relationship with President Jason Morrison.

“Jason is unlike any other presidents. I’ve worked for nine presidents. In 27 years, I’ve never met anyone like Jason,” Rice said.

Rice went on to say that Morrison embodies compassion and commitment, both to the school and the surrounding area.

“He never sleeps,” Rice said, stating that while other presidents would pitch ideas during the work day, Morrison will often text during the early morning hours about implementing ideas.

“Jason comes up with a concept, it doesn’t sit there long,” Rice said.

Additionally, Rice noted that the welding academy with instructor Casey Burns and recruiter Charles Beard has undergone some changes.

“We moved our welding academy from Magnolia over here to Camden. That’s been a benefit for us, because now our students have the opportunity to get housing,” Rice said.

Rice went on to explain that when the academy was in Magnolia, students would have to find their own housing, whereas at SAU Tech, dorms are provided.

Rice noted the accomplishments of Tech’s athletic programs, noting that the men’s basketball team finished first in its division and will host a regional tournament, while the women are hoping to end as number two in their division.

Finally, Rice noted that Tech will continue to be an important part of the community and noted that OVERSET FOLLOWS:RocketNight, Tech’s annual fundraiser, will feature former Arkansas Razorbacks Coach Houston Nutt as a speaker.