Hogs come back, beat ORU to advance to Elite Eight 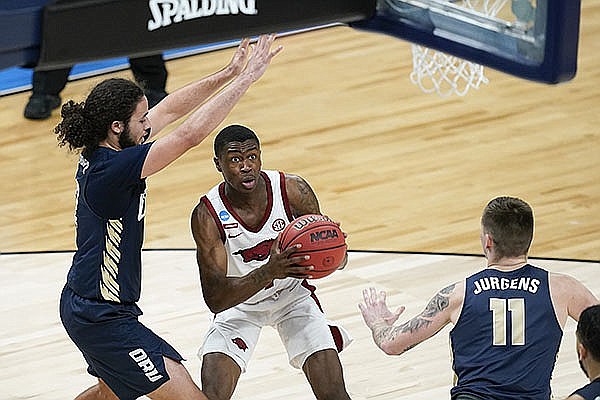 Arkansas is one victory from playing in the Final Four.

Davonte Davis made a contested jumper with 3.1 seconds remaining to give the Razorbacks a 72-70 victory over Oral Roberts on Saturday in Indianapolis. Arkansas advanced to the Elite Eight of the NCAA Tournament where it will play its region’s top seed, Baylor, on Monday.

Davis’ shot came on the possession after ORU’s Francis Lacis made 1 of 2 free throws to tie the game 70-70 with 31 seconds remaining. Kevin Abmas, the nation’s leading scorer, missed a three-point shot at the buzzer that would have won the game for the Golden Eagles.

Jalen Tate gave the Razorbacks a 64-62 lead with 4:07 remaining and the teams traded leads inside the final two minutes.

The Razorbacks defeated the Golden Eagles for the second time this season. Arkansas won the earlier meeting 87-76 on Dec. 20 in Fayetteville.

Arkansas is in the Elite Eight for the first time since 1995, when the Razorbacks finished national runner-up to UCLA.