Hogs' season comes to an end in Elite Eight 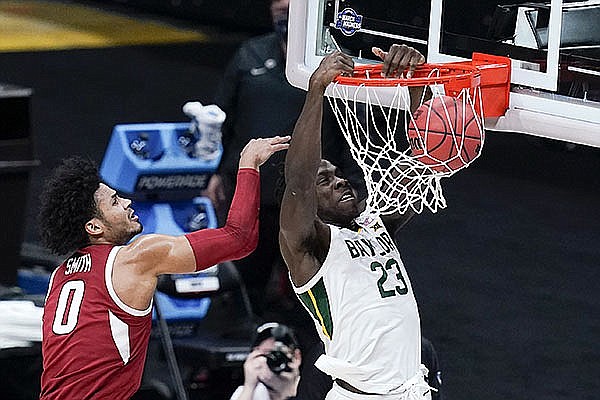 The Razorbacks fell behind Baylor by 18 points in the first half and nearly rallied to tie the game after halftime, but ran out of gas late and fell 81-72 in the Elite Eight at Lucas Oil Stadium in Indianapolis.

Baylor, the top seed from the South Region of the NCAA Tournament, advanced to the Final Four to play Houston on Saturday. The Bears (26-2) are in the Final Four for the first time since 1950.

Arkansas’ season came to an end with a 25-7 record. The Razorbacks were playing in the Elite Eight for the first time since 1995, and had advanced that far by overcoming double-digit deficits in the first three rounds against Colgate, Texas Tech and Oral Roberts.

The Razorbacks used a 9-2 run at the end of the first half to pull within 46-38 at halftime, and chipped away at the Bears’ lead throughout the second half. Arkansas cut Baylor’s lead to 64-60 on two Moses Moody free throws with 7:34 remaining.

From there the Razorbacks went cold. Arkansas missed 12 consecutive shots over a span of eight-plus minutes, and Macio Teague hit a pair of three-pointers down the stretch to help the Bears extend their lead.

Teague led Baylor with 22 points on 8 of 18 shooting. Jared Butler added 14 points and Davion Mitchell scored 12 after sitting several minutes in the first half with foul trouble.

Davonte Davis and JD Notae scored 14 points apiece to lead the Razorbacks, but Arkansas was without Notae for most of the second half after he fouled out with more than 13 minutes to play.

Jalen Tate added 13 points for Arkansas, and Moody struggled to an 11-point outing on 2 of 10 shooting, including 0 of 4 from three-point range.

The Razorbacks struggled to 11 of 30 shooting after halftime. Arkansas made 15 of 24 shots in the first half.

Arkansas lost an Elite Eight game for the first time since 1991 against Kansas. The Razorbacks had won two games in the round, when they advanced to the Final Four in 1994 and 1995.