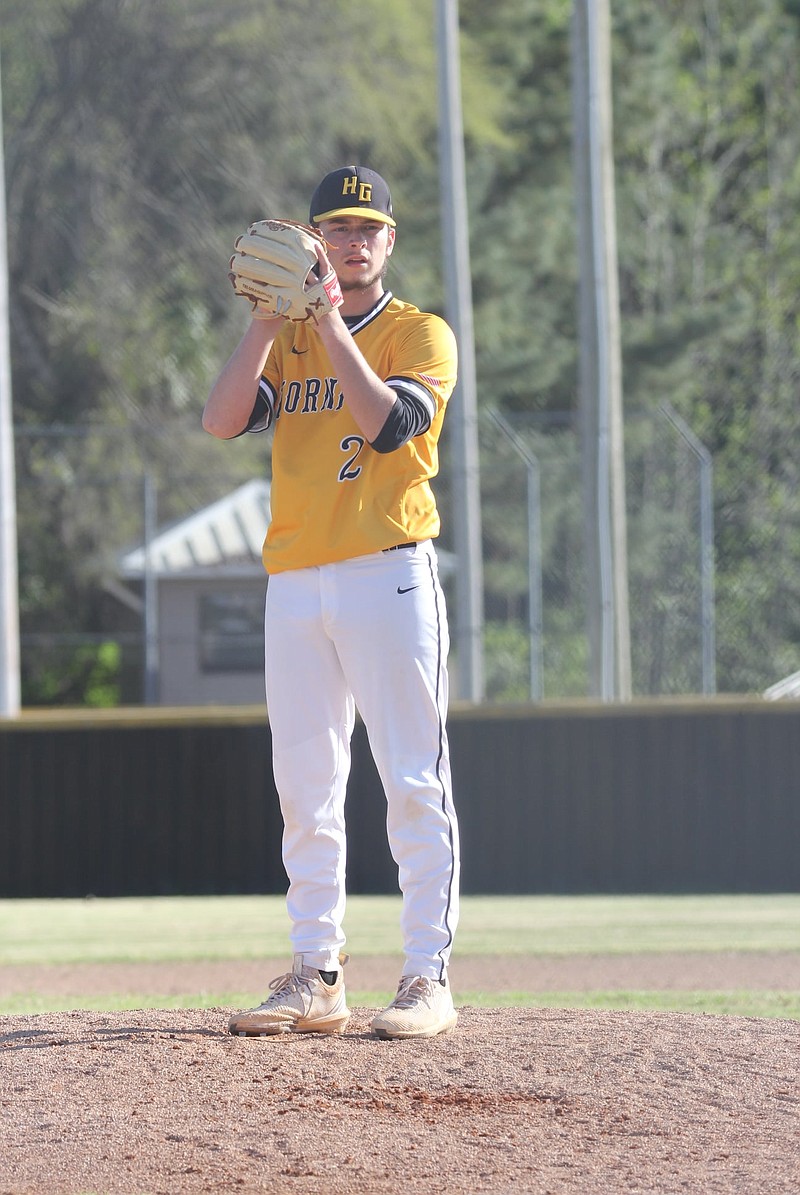 Man on the Mound Harmony Grove’s Brad Launius prepares to pitch during a recent home game. Launius is 6-1 on the season going into Regional Play.

The Harmony Grove Hornets Varsity Baseball Team has had a sensational season despite being one of the youngest teams in the state.

Just prior to play in its first regional baseball game, Hornet Head Coach Blake Williams spoke with the Camden News about how well his team has played on the diamond.

Last Friday, the Hornets completed the regular season with a big 19-2 win over McGehee to increase their record to 21-8 and send its two seniors - Houston Bryant and Brandon Harris - out in style. The Hornets were tied with Smackover for the conference title with both teams having two losses on the season and splitting victories in their two games. The Hornets earned the No. 1 Seed in the Region 4 Tournament since they defeated Smackover by three runs and were only defeated by one run against them.

Launius has gotten it done behind the plate as well with a batting average of .506 average three home runs and 17 doubles.

Freshman short stop Caleb Johnson missed several games earlier this season because of a hip injury. Since returning he’s hit at a .434 and has an on-base percentage of .610. Johnson has scored 37 runs and stolen 27 bases.

“We are hitting at a .306 but the thing this team has been great at is getting on base,” Williams explained. “That’s what really matters. We have found a way to get on base. When you can do that you can get some wins even when the hits aren’t there.”

Williams also touted Grant Bearden who stepped up to play catcher after the injury to C. Johnson. He said that he originally believed the team would have to fill the position by committee but Bearden has been a “wall” for the team in the position.

Williams stated that Andrew Taylor has been a surprise this season as the No. 3 pitcher and a leader in the outfield. He described Taylor as a “strike thrower” that is necessary for the team to have when it comes post season baseball. Taylor is joined in the outfield by Lane Davis and Gabe Johnson - all sophomores.

“We got 7 or 8 good arms,” Williams said. “You need that when it comes to navigating the regional tournaments and state tournaments. I feel like we definitely got the pitchers that you would need to take care of business.”