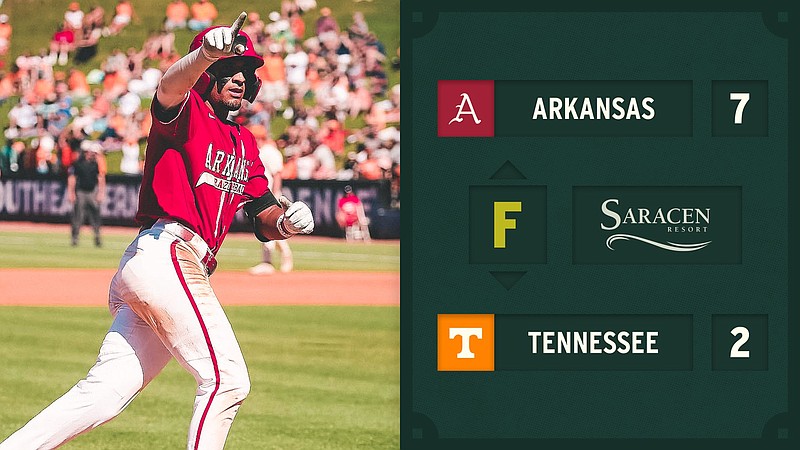 There can be no dispute: Arkansas is the best baseball team in the SEC.

The top-ranked Razorbacks, who won the SEC title during the regular season, defeated No. 4 Tennessee 7-2 on Sunday in the championship game of the SEC Tournament.

Arkansas (46-10) won its first SEC Tournament championship in its fifth time to play in the title game. The Razorbacks joined the 2019 Vanderbilt and 2017 LSU teams as the only SEC teams since the league’s last expansion to win the conference tournament in the same season they won the regular-season title.

The Razorbacks won a conference tournament title for the first time since they won the 1985 Southwest Conference Tournament at George Cole Field in Fayetteville.

Battles’ hit scored Smith, Gregory’s hit scored Opitz, and Battles scored on a sacrifice fly by Matt Goodheart to give the Razorbacks a 3-1 lead.

Battles homered to the left-field bullpen in the seventh to give Arkansas a 4-1 lead. Battles finished the game 3 for 4 with 2 runs scored. He also had a pair of great defensive plays to force out a Tennessee base runner at second base to end the fourth inning, and to start a double play to erase a leadoff single for the Vols in the eighth.

Arkansas reliever Kevin Kopps pitched the final three innings to earn his 10th save. Kopps allowed a solo home run to Pete Derkay to lead off the seventh to pull the Vols within 4-2 and scattered three singles. He struck out three.

The Razorbacks answered Derkay’s homer with three runs in the eighth inning to go ahead 7-2. Cullen Smith’s two-run home run — his third homer of the tournament — scored Robert Moore, who had a fielder’s choice RBI at the end of an eight-pitch at bat in the inning. Moore fouled off five consecutive pitches.

Tennessee (45-16), which finished second to Arkansas in the SEC regular-season standings, took a 1-0 lead with back-to-back two-out hits in the first inning. Jake Rucker doubled and scored on Drew Gilbert’s single.

That was the only run allowed by Arkansas starter Jaxon Wiggins in 3 2/3 innings. Wiggins allowed 4 hits, walked 2 and struck out 5.

Ryan Costeiu pitched 1 1/3 innings in relief of Wiggins before Lael Lockhart — who came within one out of a perfect game four days earlier against Georgia — retired all three hitters he faced in the sixth inning.

Will Heflin did not allow a hit until the fourth inning, then relinquished the lead by allowing all three runs in the fifth. Heflin, a left hander who is the Vols’ No. 2 starter, allowed 3 runs on 4 hits and 2 walks, and struck out 4.

Tennessee, which shut out Alabama and Florida in games Friday and Saturday, used seven pitchers against the Razorbacks.

Arkansas finished the tournament undefeated in four games. The Razorbacks defeated Georgia 11-2 and Vanderbilt 6-4 in double-elimination play, and defeated Ole Miss 3-2 on Saturday in a semifinal game.

The Razorbacks improved to 3-1 against Tennessee this season and to 20-4 against teams that are being considered to host an NCAA regional.