Biden tells Erdogan that US and Turkey must avoid crises 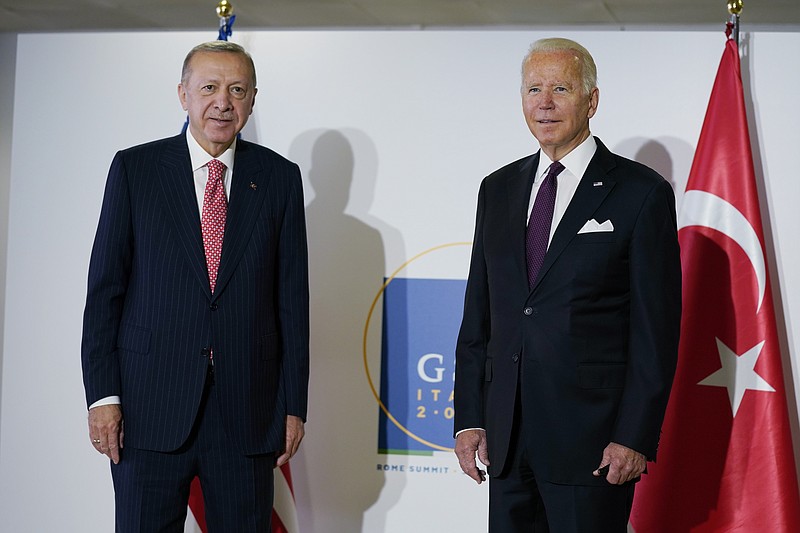 ROME (AP) -- U.S. President Joe Biden told Turkish President Recep Tayyip Erdogan on Sunday their countries must better manage disagreements after the partnership between NATO allies was tested by Turkey's threat to no longer recognize the American envoy and its purchase of a Russian missile defense system.

"We're planning to have a good conversation," Biden said as the leaders appeared in front of journalists before nearly an hour of closed-door talks. The president did not answer questions about whether Turkey had grown too close to Russia or about human rights.

In the meeting, Biden reaffirmed Turkey's importance as a NATO ally as well as its defense partnership with the U.S., but raised with Erdogan concerns about possession of the Russian S-400 missile system, the White House said in a statement afterward.

The Turkish president has said he's open to buying a second Russian missile system, despite the controversy generated by the 2017 deal to acquire the Russian-made system.

Turkey's role as a NATO ally has come under sharp scrutiny in recent weeks.

Erdogan at an Oct. 23 rally said 10 foreign ambassadors who called for the release of a jailed philanthropist should be declared persona non grata. The envoys, including the U.S., French and German representatives, had previously issued a statement seeking to resolve the case of Osman Kavala, a businessman and philanthropist held in prison since 2017 despite not having been convicted of a crime.

Erdogan did not follow through on the threat, but it reflected the rising tensions with the U.S.

"I cannot honestly say that there is a healthy process in Turkish-American relations," state-run Anadolu news agency quoted Erdogan as saying in September.

Erdogan's office said in a statement the meeting was held in a "positive atmosphere" in which the leaders expressed a desire to "further strengthen and improve Turkey-U.S. relations and agreed to establish a common mechanism accordingly."

The statement also said there was "satisfaction with the mutual steps taken on climate change."

Turkey was kicked out of a U.S. program to buy F-35 combat planes and defense officials were sanctioned after it bought the Russian-made S-400 system. The U.S. strongly objects to the use of Russian systems within the NATO alliance and says it poses a threat to the F-35s.

Turkey maintains the S-400s could be used independently without being integrated into NATO systems and therefore pose no risk.

Turkey is also interested in purchasing American-made F-16 fighter aircraft, but Biden was "very clear" with Erdogan there is a process such sales must go through, a senior Biden administration official told reporters after the meeting, which took place as world leaders are in Rome for the Group of 20 nations summit. The official spoke on condition of anonymity to discuss the private talks.

Erdogan had previously said his government is seeking to recover a $1.4 billion payment the country made before it was expelled from the F-35 program and the United States has proposed selling F-16 fighter jets to Turkey to make up for the payment.

In comments to reporters after the meeting, Erdogan spoke optimistically about reaching an agreement with the U.S. on F-16 sales.

The White House statement said Biden and Erdogan also discussed the political process in Syria, humanitarian assistance for Afghans, elections in Libya, the situation in the Eastern Mediterranean and diplomatic efforts in the South Caucasus.

And Biden raised concerns about human rights and the rule of law in Turkey, and called for the countries to cooperate more and handle "disagreements effectively," the White House said.

Biden and Erdogan last met in June at a NATO summit where they discussed the possibility Turkey could secure and operate the international airport in Kabul, Afghanistan. But those plans evaporated as the Taliban swiftly took control of Afghanistan amid the U.S. military departure. 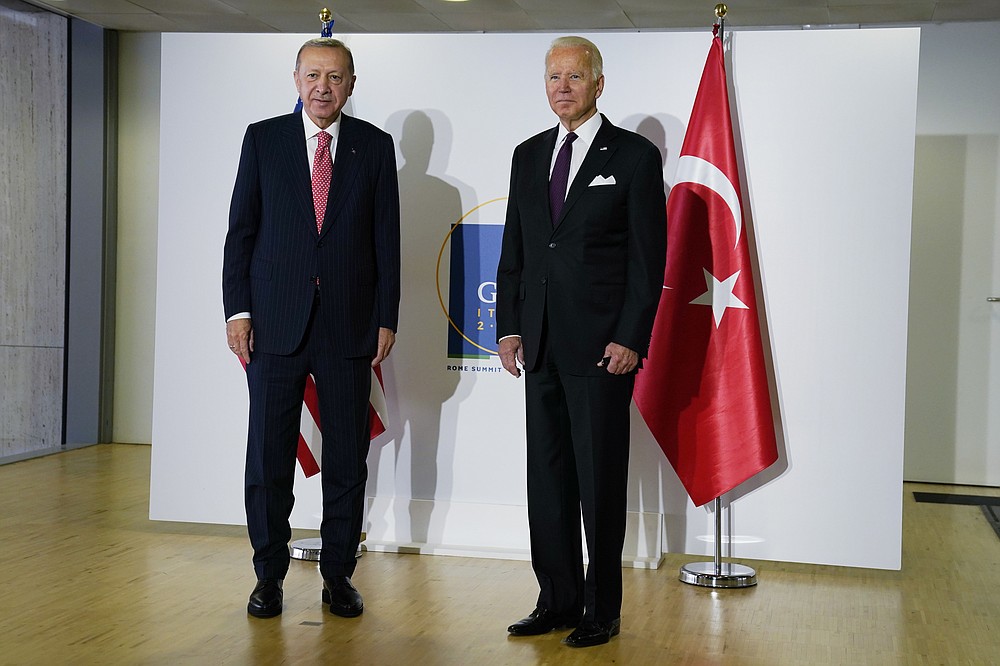 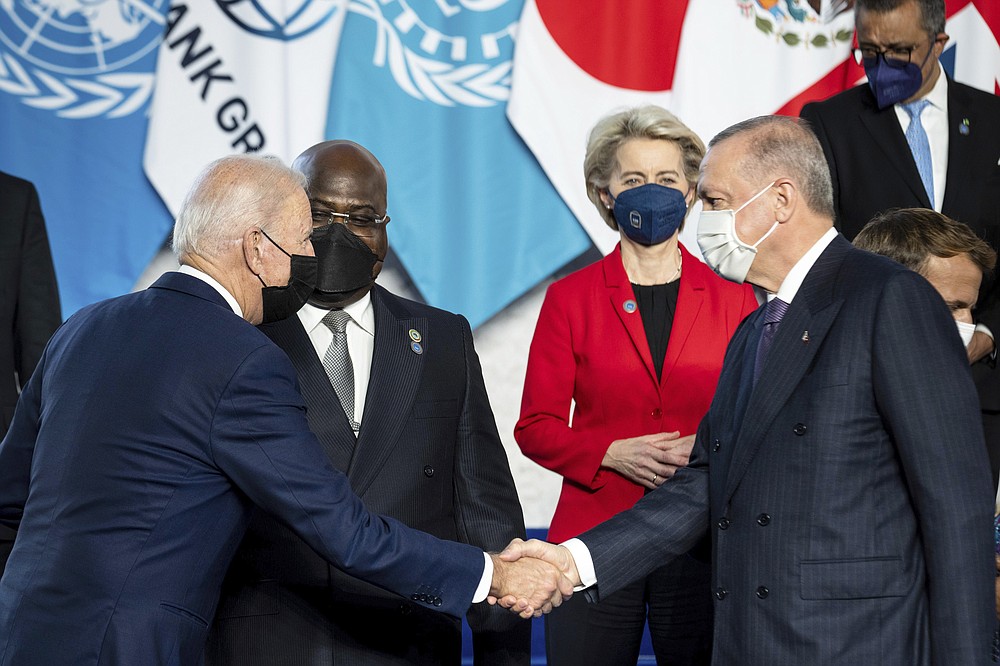 U.S. President Joe Biden, left, shakes hands with Turkish President Recep Tayyip Erdogan ahead of the opening session of the G20 summit at the La Nuvola conference center, in Rome, Saturday, Oct. 30, 2021. The two-day Group of 20 summit is the first in-person gathering of leaders of the world's biggest economies since the COVID-19 pandemic started. (Erin Schaff/Pool Photo via AP) 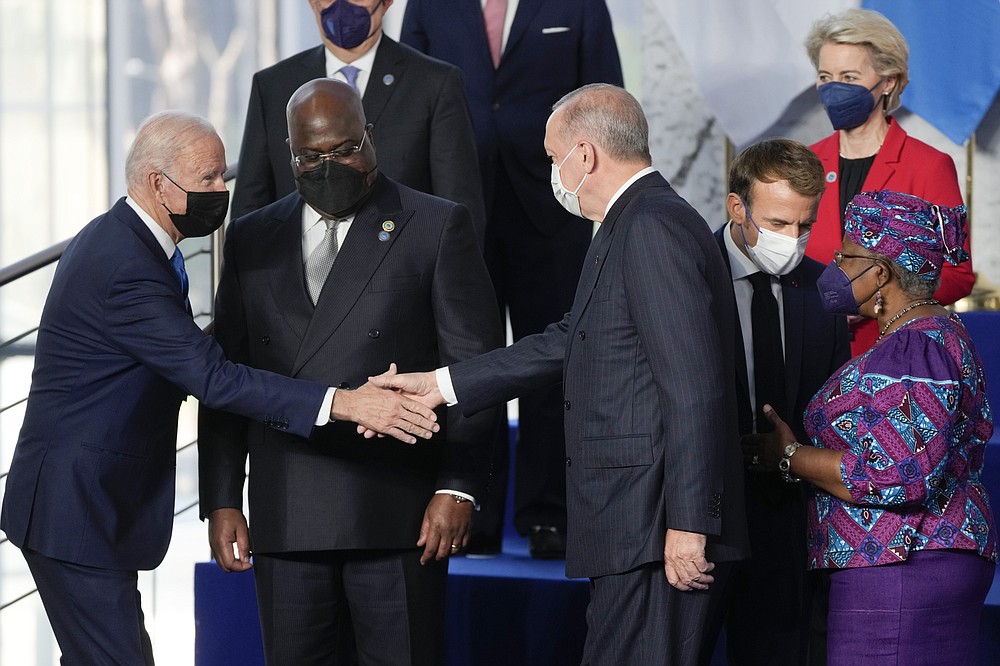 Print Headline: Biden tells Erdogan that US and Turkey must avoid crises