Arkansas covid cases jump by 907; some schools affected by absenteeism of students, staff 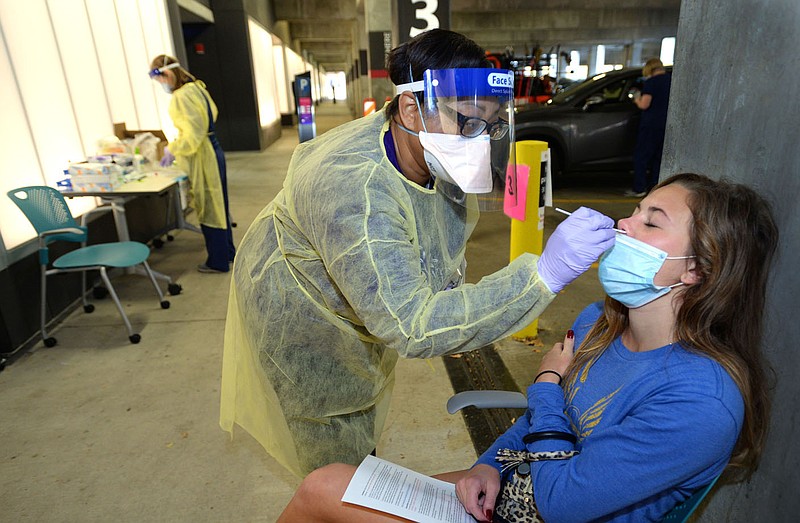 Riley Hunt, a University of Arkansas freshman from Greenville, Ohio, gets a coronavirus test Friday, Oct. 23, 2020, from Erica Nash, a licensed practical nurse with Arkansas Foundation of Medical Care and the state Department of Health inside the Garland Avenue parking garage on the Fayetteville campus. (NWA Democrat-Gazette/Andy Shupe)

A surge in coronavirus cases in Arkansas continued Thursday as the state's count rose by 907, the biggest one-day spike in more than six weeks.

After jumping by 24 Wednesday, the number of people hospitalized with covid-19 in the state rose Thursday by four, to 304.

The state's death toll from the virus, as tracked by the Department of Health, rose by four, to 8,599.

"I think the numbers show that we are continuing to be on an upward trend of new cases and a new surge," said Dr. Jennifer Dillaha, the Health Department's chief medical officer.

The upswing is particularly worrying, she said, heading into next week, when Thanksgiving gatherings could cause it to worsen.

A spike in cases in Independence County, combined with a large number of teacher and student absences, prompted the Batesville School District to announce Thursday that it would hold classes virtually next week on Monday and Tuesday, heading into the holiday break.

That came as a Health Department report showed active cases among public school students and employees statewide rising to their highest level in more than a month.

"For our county, it's just going up all over the place, and we're a large portion of the county, our district itself," Batesville School District Superintendent Michael Hester said.

"We've got folks who have been vaccinated who are positive, those who are unvaccinated are getting positive, and so we don't know what all that means. It's just that we have to react to the numbers of what's available."

"However, we know that people who are fully vaccinated and have had their booster are at a much lower risk for breakthrough infections, and for that reason I strongly encourage anyone who is eligible for a booster to go get one now," Dillaha said.

Thursday's increase in cases was the first one-day rise since Sept. 30 that topped 900.

It followed jumps of 814 cases Tuesday and 828 Wednesday.

Before this week, the last time the state's count rose by more than 800 on a single day was Oct. 9.

Rising for the sixth day in a row, the average daily increase in the state's case count over a rolling seven-day period went up to 587.

With new cases outpacing recoveries and deaths, the number of cases in the state that were considered active rose by 437, to 5,881, the largest total since Oct. 18.

Growing for the fifth-straight day, the number of the state's virus patients who were on ventilators went up by one, to 69.

After rising the previous two days, however, the number who were in intensive care fell by five, to 124.

The number of intensive care unit beds in the state's hospitals that were unoccupied rose by two, to 105.

People with covid-19 made up about 12% of all the state's patients in intensive care, down slightly from almost 13% a day earlier.

In Batesville, about 15% of the school district's 3,200 students were absent Thursday, with the percentage as high as 25% in some buildings, Hester said.

Teacher absences were an even bigger problem. He said he had a need for 61 substitute teachers Thursday but was only able to find about half that number.

While 82% of the district's staff has been vaccinated, teachers often find themselves having to stay home when one of their own young children is quarantined after being near an infected person, he said.

"It's been almost two weeks now that we have just pushed everybody thin, and we've got everybody covering or combining," Hester said.

"Literally, we wore everybody out with trying to cover for all the quarantines that the adults are having to be involved with."

According to a Health Department report, the district had 37 active cases among students and employees, up from 23 as of Monday.

The district has a mask requirement that kicks in when the number of cases in the county, as tracked by the Covid Act Now website, is at or above 36 per 100,000 residents over a two-week period.

The number per 100,000 residents during the two weeks ending Wednesday was 57, according to the site.

In Garland County, classes for the remainder of the week in the Mountain Pine School District shifted to remote instruction Tuesday for high school students and Thursday for elementary students in response to an increase in quarantines and absences of teachers and students, the district said on its Facebook page.

"The current number of quarantines in the last two weeks, includes 60 students and 5 staff members," the district said in a post.

"We have had 3 staff members and 1 student test positive for COVID."

It said if students and staffers had been wearing masks properly, "we would not have had to quarantine so many students or staff members."

"We have had students out for flu, strep, cold and sinus infections, [throwing up] and diarrhea," the district said in the post.

The district, which has about 630 students, lifted its mask requirement last month, while the state's new cases were on the decline, but encouraged students and employees to continue wearing them as a way to avoid illness and quarantines.

Saying school districts in Arkansas and nationwide are "dealing with a tremendous challenge of securing substitute teachers each day," the Cabot School District said on its Facebook page that it would be flexible with attendance for students today.

"What this means is for students who choose not to attend tomorrow, the day will not count toward the attendance policy and there will not be any digital assignments," the district said in the post.

It stressed, however, that schools would be open and not dismissing early and that buses would run normally.

Across all public school districts and charter school systems, the number of active cases among students and employees rose by 284, to 1,514, from Monday to Thursday.

As tracked in Health Department reports released twice a week, the number as of Thursday was the highest since Oct. 7, although still down from an all-time high of more than 4,800 in early September.

The number of districts and charter school systems with at least five active cases rose from 68 as of Monday to 82.

At colleges and universities, the number of active cases among students and employees rose by 38, to 116, from Monday to Thursday.

The University of Arkansas, Fayetteville, had the highest total on both days as its number rose from 15 as of Monday to 24.

The University of Central Arkansas in Conway had the next-highest total Thursday with 12, followed by Harding University in Searcy with 11.

At private elementary and secondary schools, the number of active cases among students and employees rose by six, to 32, from Monday to Thursday.

With five active cases as of Thursday, Arkansas Christian Academy in Bryant was the only private school listed in the report, which didn't list schools or districts with fewer than five active cases.

In a weekly report, the Arkansas Center for Health Improvement said eight school districts had 50 or more more new cases per 10,000 residents within their boundaries over a recent 14-day span.

A week earlier, no districts had that many new cases per 10,000 residents.

Districts with at least 50 cases per 10,000 residents over a two-week period are colored red on a map on the center's website.

"As we enter the holidays, COVID-19 remains present in all of our communities," the center's chief executive, Joe Thompson, said in a news release.

"It is very concerning that after a week with no red districts, the trend has reversed with eight districts in the red this week. I encourage parents to get their kids protected, and as we prepare for Thanksgiving gatherings next week I urge inclusion of COVID-19 precautions in your families' plans."

The cases used to calculate the rates for each district include those among residents living within the district's boundaries, excluding incarcerated people, and residents of nursing homes and human development centers.

It said people should get vaccinated, wear masks when inside a grocery store or another indoor public space or while serving food, and wash their hands before eating or serving food.

People should also plan to hold activities outdoors and communicate in advance with guests about precautions that will be taken and expectations for whether those in attendance will be vaccinated.

People who aren't vaccinated should delay travel if possible, and those who are sick should not attend or host events, the center said.

Statewide, Benton County had the most new cases Thursday with 86, followed by Washington County with 73 and Pulaski County with 65.

Dillaha said all of the deaths reported Thursday happened within the past month.

She said 6.8% of the state's coronavirus tests were positive over the seven-day span ending Wednesday, down slightly from the 6.9% that was initially reported for the week ending Tuesday.

Gov. Asa Hutchinson has said he wants to keep the percentage below 10%.

The number who have ever been on ventilator with covid-19 rose by one, to 2,962.

At 10,958, the increase in the Health Department's tally of vaccine doses that had been administered was the third one in a row that was smaller than the one a week earlier.

Booster shots accounted for more than 55% of the most recent increase.

First doses rose by 3,302, which was smaller by more than 1,100 than the increase in first doses a week earlier.

The number of children ages 5-11 who had received first doses rose by 792.

That brought to 14,891 the total number of children in that age group who had received first doses since they became eligible for a low-dose version of the Pfizer vaccine earlier this month.

In a tweet, Hutchinson referred to his announcement Monday that he was expanding eligibility for booster doses of the Pfizer and Moderna vaccines to all adults who received their second doses at least six months ago.

Since then, he said, 32,986 doses, including first doses, second doses and boosters, have been administered.

"Let's continue this trend, because our new cases are higher than last week," Hutchinson said.

The average number of total doses administered each day over a rolling seven-day period fell to 9,468, its lowest level since the week ending Nov. 8.

After rising a day earlier, the average for first doses fell to 3,229.

According to the U.S. Centers for Disease Control and Prevention, the percentage of Arkansans who had received at least one vaccine dose remained Thursday at 59.4%, and the percentage who had been fully vaccinated remained at 48.8%.

Of those who were fully vaccinated, the percentage who had received a booster dose remained at 17.1%.

Among the states and District of Columbia, Arkansas continued to rank 36th in the percentage of its residents who had received at least one dose and 44th, ahead of Louisiana, North Dakota, Mississippi, Alabama, Wyoming, Idaho and West Virginia, in the percentage who were fully vaccinated.

Nationally, 68.8% of people had received at least one dose, and 58.9% were fully vaccinated.

Of the fully vaccinated population nationally, 16.6% of people had received booster doses.

Information for this article was contributed by Cynthia Howell of the Arkansas Democrat-Gazette.