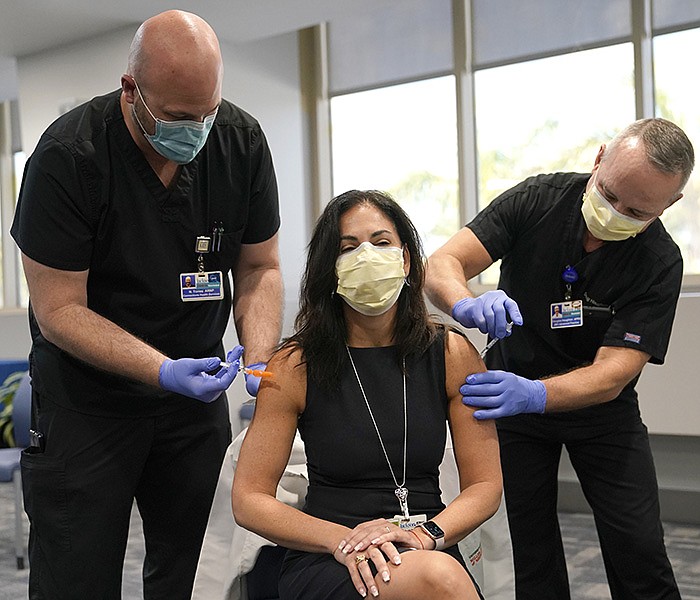 Dr. Lilian Abbo, center, receives a flu vaccine from Nicholas Torres, left, and a Pfizer COVID-19 booster shot from Douglas Houghton, right, at Jackson Memorial Hospital Tuesday, Oct. 5, 2021, in Miami. According to the Centers for Disease Control and Prevention it is safe to get your COVID-19 vaccine and flu vaccine at the same time. The COVID-19 booster is now available to those over 65 and to workers whose jobs put them at high risk of exposure. (AP Photo/Lynne Sladky)

WASHINGTON -- Johnson & Johnson on Tuesday asked the Food and Drug Administration to grant emergency use authorization for a booster dose of its single-shot coronavirus vaccine.

The action is part of an effort by Biden administration officials to provide increased protection against covid-19, the disease caused by the coronavirus, which has claimed more than 705,000 lives in the United States.

Johnson & Johnson "is asking the FDA to look at our data and agree with us that we have enough data to support a boost" for people 18 and older, said Mathai Mammen, global head of research and development for the Janssen Pharmaceuticals division of Johnson & Johnson.

Based on the data, Mammen said in an interview, the company believes the best immune response occurs when a booster is administered at least six months after vaccination. But he said the company was not formally recommending a specific interval. Instead, the FDA and its outside advisers will determine the appropriate timing between the initial vaccination and the booster, he said.

The company, in a statement issued Tuesday, said the data packet for the FDA includes recent results from a Phase 3 trial that found an extra shot given about two months after the primary dose provided 94% protection against moderate to severe covid-19, up from 73% in the United States. Protection was 100% two weeks after the booster was administered. The booster provided a three- to fourfold increase in antibodies, according to the data.

Johnson & Johnson said it also submitted data showing that when the booster was administered at least six months after the initial shot, antibody levels increased ninefold one week after the extra shot and 12-fold four weeks after the booster.

The FDA plans to meet with its vaccine advisory committee Oct. 14-15 to discuss boosters for the Moderna vaccine and for the Johnson & Johnson vaccine.

The advisers will also review data from the National Institutes of Health about mixing and matching boosters -- using different brands from the initial shots. Officials have made clear they think boosters are needed to counter waning immunity caused by the delta variant of the virus, or by the passage of time, or by some combination.

The FDA already has authorized a booster for people who received the Pfizer-BioNTech two-shot regimen. The extra dose is cleared for use at least six months after the second shot for people 65 and older and for those with underlying medical conditions or occupational exposure that raises their risk of severe covid-19.

Moderna has also filed a request to the FDA to grant emergency use authorization for a booster after its two-dose regimen.

Federal officials have warned that the Johnson & Johnson vaccine is linked to rare side effects including blood clots and Guillain-Barre syndrome, a neurological problem, but have said the vaccine's benefits in preventing covid-19 far outweigh any risk.

[Video not showing up above? Click here to watch » https://www.youtube.com/watch?v=TaXY9irszKA]

Separately, research conducted in Southern California has confirmed the dramatic erosion of the Pfizer-BioNTech vaccine's protection against breakthrough infections.

The new study, one of the largest and longest to track the effectiveness of a vaccine in Americans, found that the vaccine's ability to protect against infection stood at 88% in its first month, then fell to 47% after just five months.

But even as the delta variant became the predominant strain across the South, the vaccine's effectiveness at preventing covid-19 hospitalizations held steady at close to 90% for as long as six months. What's more, it maintained that power across vaccine recipients of all age groups.

The study, funded by Pfizer and published Monday in the journal Lancet, also provides strong new evidence that the waning immunity against infection probably would have been seen even without the arrival of the delta variant.

The researchers, led by infectious disease epidemiologist Sara Tartof of Kaiser Permanente Southern California, drew on several findings to conclude that the delta variant was not the driving factor in the vaccine's waning efficacy against infection. Instead, the passage of time appeared to be the key to a vaccinated person's resurgent vulnerability.

Second, the vaccine's ability to keep vaccinated people out of the hospital remained high across a span of time when the delta variant gained ground in Southern California.

And third, breakthrough infections were more closely linked to the amount of time that had lapsed since vaccination than they were to the particular viral variant involved.

By showing that waning immunity, not the delta variant, was the likely reason for the rise in breakthrough infections, the study suggests it may not be necessary to reformulate a Pfizer-BioNTech booster that specifically targets delta.

For now, at least, a third shot identical to the first two would probably extend the vaccine's early record of protection against all strains, including delta, Tartof said.

Meanwhile, AstraZeneca said Tuesday that it had asked the FDA to grant emergency authorization for a long-acting antibody treatment to prevent covid-19 in people who are at high risk of the disease. If authorized, it would become the first such preventive treatment to be available in the United States, the company said.

The company said in a statement that the treatment had reduced the risk of symptomatic covid-19 by 77% in a trial in which most participants either had other medical conditions that placed them at greater risk of severe illness or were not producing sufficient antibodies after vaccination.

It said the treatment could be used in conjunction with vaccines in people with weaker immune systems. Other antibody treatments in use in the United States, including one developed by the drugmaker Regeneron, have been used mainly to treat people who are already infected with the coronavirus. The AstraZeneca treatment is designed to stay in the body for much longer than the available antibody treatments for covid, the company has said.

"Vulnerable populations such as the immunocompromised often aren't able to mount a protective response following vaccination and continue to be at risk of developing covid-19," Mene Pangalos, an executive vice president at AstraZeneca, said in a statement. "With this first global regulatory filing, we are one step closer to providing an additional option to help protect against covid-19 alongside vaccines."

An FDA authorization would raise the fortunes of AstraZeneca, whose coronavirus vaccine, which is in use in numerous countries, has not been authorized in the United States.

Antibody treatments have gained greater attention in recent months as an alternative, if expensive, tool against covid-19 in the United States, particularly by some who have shunned vaccines. The Biden administration has emphasized that vaccinations are the best way to prevent the spread of the coronavirus but has urged state and local health officials to make antibody therapy -- which the federal government covers at a per-dose cost of roughly $2,100 -- more widely available.

In Australia, Ellume, a company that makes a widely available at-home coronavirus test, has recalled nearly 200,000 test kits because of concerns about a higher-than-expected rate of false positives. That represents about 5.6% of the approximately 3.5 million test kits Ellume has shipped to the United States.

The company, which detected the problem in mid-September, traced the issue to variations in the quality of one of the raw materials used in the test kit, said Dr. Sean Parsons, Ellume's CEO. He declined to specify the material in question, citing a desire not to disclose precisely how the test kits work.

Approximately 427,000 test kits, including some provided to the U.S. Department of Defense, were affected by the problem, Parsons said. Roughly half have already been used, he said, yielding about 42,000 positive results. As many as one-quarter of those positives may have been inaccurate, Parsons said, although he stressed that it would be difficult to determine exactly how many.

"I'm very sorry that this has happened," Parsons said. "We're all about chasing accuracy, and to have these false positives is disappointing."

The issue did not affect all Ellume test kits or the reliability of negative results, the company said.

Ellume's test is a rapid antigen test, designed to detect pieces of the virus in the nose. Users swab their nostrils, insert the swab into a dropper of fluid and then add the fluid to a Bluetooth-connected analyzer. Results are transmitted to a smartphone app in 15 minutes. In December, it became the first over-the-counter, completely at-home test to receive an emergency use authorization from the FDA.

The company has asked retailers to remove the tests from shelves and is in the process of notifying consumers, Parsons said.

Information for this article was contributed by Laurie McGinley of The Washington Post; by Emily Anthes and Shashank Bengali of The New York Times; and by Melissa Healy of the Los Angeles Times.