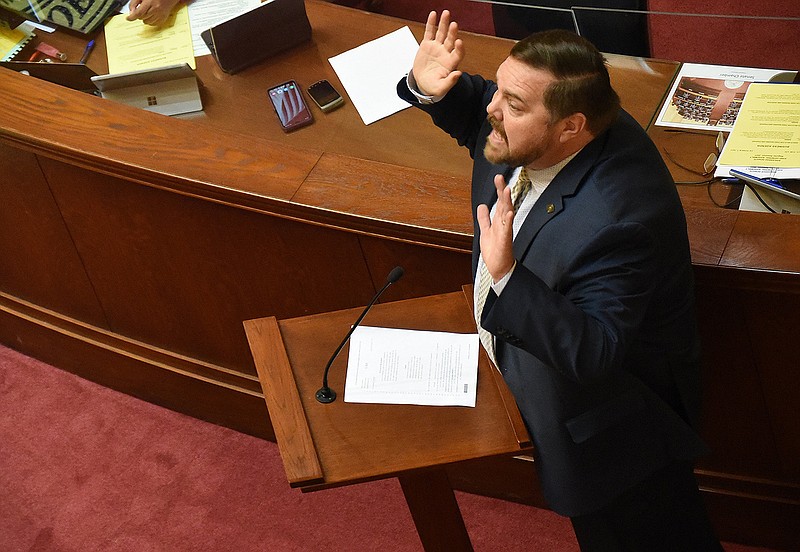 “There’s nothing that is driving my constituents crazy and causing fear from my constituents and hurting them as much as this issue,” Sen. Bob Ballinger said Thursday of employer vaccination requirements. (Arkansas Democrat-Gazette/Staci Vandagriff)

A bill that would create a right of privacy regarding an employee's vaccination status sailed through the Arkansas Senate and cleared a House committee Thursday.

Senate Bill 731, by Sen. Bob Ballinger, R-Ozark, would prohibit employers from requiring the disclosure of an individual's vaccination status and from retaliating against an individual for exercising that right to privacy.

The Senate voted 22-11 in the morning to send SB731 to the House. Late in the afternoon, the House Public Health, Welfare and Labor Committee voted 11-7 to recommend the full House approve the bill. The full House considers the bill next.

The General Assembly's actions on Thursday came during the 117th day of this year's regular session, which began in January and then recessed in late April.

House and Senate leaders summoned lawmakers back for the extended regular session, starting Sept. 29, to redraw congressional district boundaries, but the redistricting has been overshadowed by these covid-19 vaccination measures during the past nine days.

The bills are a response to President Joe Biden's announcement last month that he would require employers with more than 100 workers to mandate vaccinations for employees or test them for the virus weekly. That requirement will be enacted through a rule from the Occupational Safety and Health Administration.

The Biden administration also announced that it would expand coronavirus vaccination requirements to cover staffers within all Medicare- and Medicaid-certified facilities.

Under SB731 by Ballinger, an individual would have a right to decide whether his or her covid-19 vaccination status is disclosed in an employment setting.

The right to decide whether to disclose one's vaccination status under the bill would be available to existing employees, individuals seeking employment and individuals engaging in contracts with an employer.

The bill would bar an employer from requiring the disclosure of an individual's vaccination status for covid-19 and retaliating against an individual exercising his or her right of privacy.

SB731 would grant an employee or individual who is injured by an employer in violation of the measure the remedies and procedures available under the Arkansas Civil Rights Act of 1993.

"There's nothing that is driving my constituents crazy and causing fear from my constituents and hurting them as much as this issue," Ballinger told the House committee Thursday afternoon.

He said it protects one's right to keep health choices private and most people know there are certain things people don't ask each other about.

"It's not something that we necessarily had to protect because we didn't see widespread abuse of it," he said. "Because of the pandemic we kind of went crazy and we just said, 'OK, we aren't worried about those natural boundaries anymore.'"

Under the bill, the state Department of Finance and Administration may establish a grant program with distribution of covid-19 relief funds or funds received under the American Rescue Plan Act to provide restitution to individuals injured by a violation of the measure.

"As a result the language authorizing DFA to set up a grant program to compensate these individuals with ARP funds is a section of the law that is on uncertain legal grounds, at a minimum," John Grathwol of Hagerty Consulting wrote in an email to a finance department deputy director, Paul Louthian. "Again the clear intent of the law is to reduce the community spread of the COVID-19 virus."

Republican Gov. Asa Hutchinson said Thursday he would review SB731 and make a decision on his position next week.

Some House committee members said they were concerned that hospitals in their districts would lose Medicare and Medicaid funding if the bill is passed.

"You either violate state law or you no longer get Medicare and Medicaid, which probably makes up 70% of your total business. What would you have me tell them?" Rep. Michelle Gray, R-Melbourne, asked.

Ballinger said the proposed federal rules haven't been issued yet and that he did not think they would be upheld in court.

"I don't want to cave to the feds before we even know what the feds have given us to cave to," he said.

Sen. Jon Eubanks, R-Paris, said he didn't think the bill would protect people since they are already "under a deadline."

"I think a lot of people are getting a lot of false hope right now because they think this is going to protect them from what's going to take place in the next month or six weeks," he said.

Ballinger acknowledged the bill wouldn't go into effect for 90 days because it does not have an emergency clause.

Blair Allen, a restaurant and hotel operator, spoke against the bill. He said he wasn't looking to fire anyone, but wanted to follow public health guidelines.

"When I have employees who serve your food and make your bed, I'm concerned about you as a citizen, making sure that you're protected," Allen said. "I want to ask their vaccination status to know how long they would need to be quarantined in the event that they become sick."

Members of the public who spoke for the bill decried federal mandates. Jacque Martin, Arkansas state director for the self government-focused organization Convention of States, called Biden's vaccine order unconstitutional. She urged lawmakers to "stop the snowballing from the federal government to the state" and defend individual rights.

"You're taking that right away from us if you allow corporations and commerce departments and attorneys to supersede our rights," she said.

Rep. Carlton Wing, R-North Little Rock, said passing the bill would give the state "an opportunity to negotiate from a position of strength" when the state's attorney general ultimately challenges the federal rules, as attorneys general in several states have promised to do.

The Senate on Thursday transmitted one of the two identical bills that aim to exempt employees from federal or employer covid-19 vaccine mandates -- Senate Bill 739 by Sen. Kim Hammer, R-Benton -- to the Republican governor, a day after the House voted 61-25 to approve the bill.

The House on Thursday transmitted the other identical bill -- House Bill 1977 by Rep. Josh Bryant, R-Rogers -- to Hutchinson after an attempt to add an emergency clause to the bill failed in the Senate on Thursday morning for the second consecutive day.

For a bill to take effect immediately, it must have an emergency clause that is approved by two-thirds of the Legislature -- 24 votes in the Senate and 67 votes in the 100-seat House. Otherwise, the bills take effect 90 days after the session ends.

Hutchinson has expressed his reservations about the bills, but has stopped short of saying what action he will take on them. It takes a simple majority in both the House and Senate to overturn a veto of a bill.

Asked about whether he intends to sign the bills, veto them or let them become law without his signature, Hutchinson said Thursday that he would review the repercussions of the bills and listen to any concerns. He said he expected to make a decision next week.

HB1977 and SB739 would require employers that mandate vaccinations to provide an exemption process for workers, including requiring them to produce a negative antigen test once a week or proof of immunity for the virus that causes covid-19 or its variants, including the presence of antibodies, T cell response or proof of a positive covid-19 test from a licensed health care provider two times a year.

"What we are trying to do is to establish a firewall between what the feds are going to mandate and what we as a state have said we are going to enforce," Hammer said in an interview.

Asked if that's legal, he said, "We'll find out in court."

Under the bills, the cost of the testing would be covered through any state or federal funding made available, including covid-relief funds distributed from the American Rescue Plan Act, if the employee's health benefit plan does not provide coverage for the testing. In the event that funding is unavailable to cover the cost of the testing, then the cost would be covered by the employee under these bills. State officials have warned the testing could cost several hundred million dollars -- an estimate that Hammer has contended is overblown.

Hammer estimated that his bill would protect "hundreds and probably thousands" of employees from being fired by their employers for not getting vaccinated, based on the emails and personal stories that he's learned about.

He said his bill would allow employees who are fired over refusal to be vaccinated to file for unemployment benefits.

Both HB1977 and SB739 do not change existing unemployment law and the Division of Workforce Services "has no way of estimating what the impact to the trust fund may be," Department of Commerce spokeswoman Alisha Curtis said Thursday

If enacted into law, then the bills "shall expire on July 31, 2023, unless extended by the General Assembly."

In a 13-18 vote, the Senate on Thursday rejected Senate Resolution 34 by Senate President Pro Tempore Jimmy Hickey, R-Texarkana, under which the Senate would recess the regular session that day and House and Senate legislators could reconvene to consider vetoes, and correcting errors or oversights or adjourn no later than noon Oct. 14.

House Speaker Matthew Shepherd, R-El Dorado, filed a similar resolution, but he did not bring it up when the House convened Thursday. He said there would be legal concerns if the House passed a resolution to adjourn but the Senate did not.

"As much as I would love the opportunity to present that to you today and obtain a favorable vote, I'm not willing to create a greater constitutional crisis than what may otherwise exist at this point in time," Shepherd said.

On Thursday afternoon, Hickey and Shepherd filed identical resolutions -- Senate Resolution 35 and House Resolution 1054, respectively -- under which each chamber would recess for the regular session by the close of business today as may be agreed upon by the House and Senate. The resolution would authorize Hickey and Shepherd to reconvene the General Assembly at any time before noon Oct. 15 to consider vetoes, correcting errors and oversights or adjourn the regular session.

The House and Senate are expected to consider the resolutions this morning. 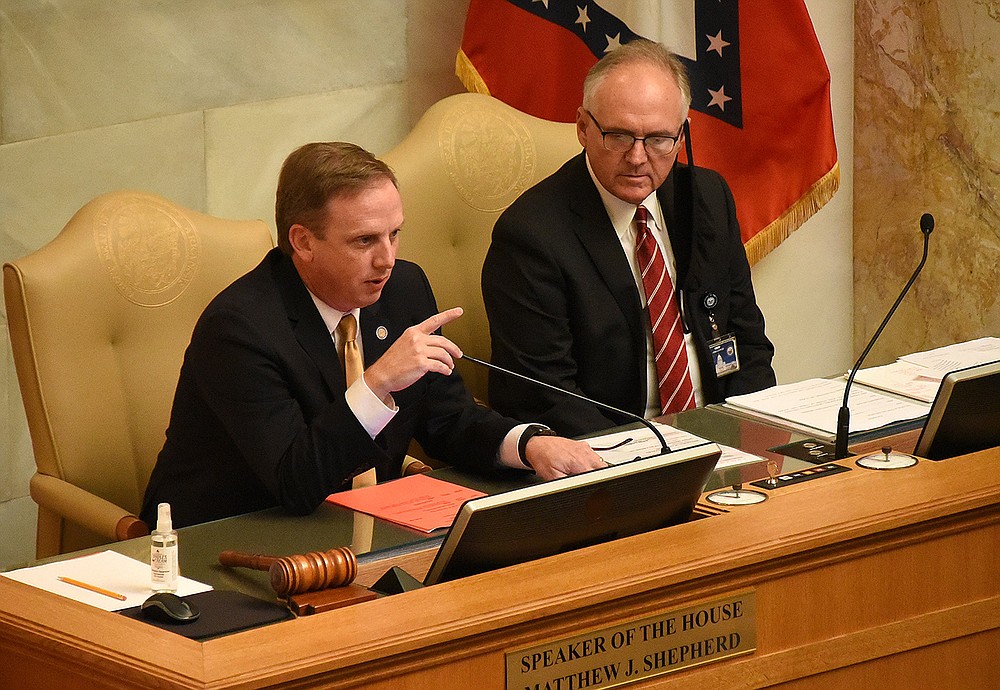