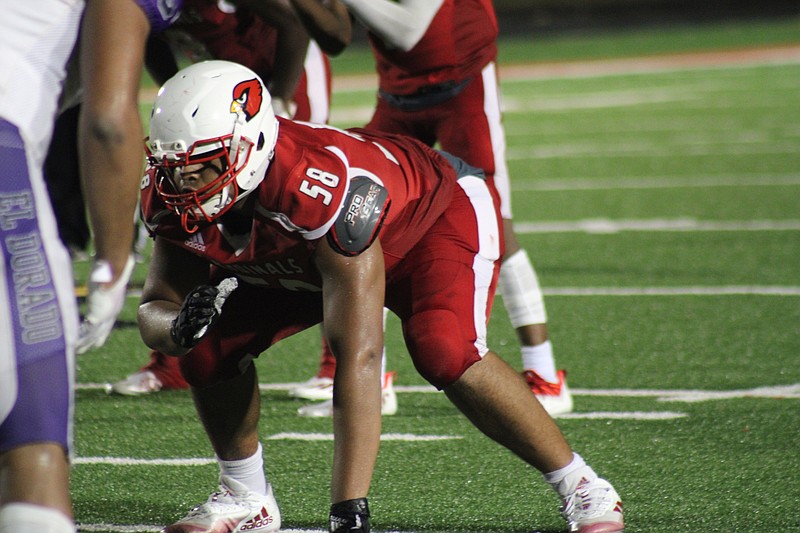 Photo By: Michael Hanich Camden Fairview tackle Mark Welch ready for a battle on both sides of the trenches on Friday night

In six games this season, the Camden Fairview Cardinals (5-1) have shown they are among the most complete and well-balanced team in the conference. They have done so in non-conference play and through the first two games of conference play against the Lakeside Rams and the Arkansas High School Razorbacks.

In the first conference games of the season, against the Lakeside Rams and the Arkansas Razorbacks, Camden Fairview proved its mettle. These two teams are some of the top four projected teams in the season, along with Camden Fairview. The Cardinals will host one of the last top teams in the conference in the Magnolia Panthers (2-4) on Friday night.

Last season, the Cardinals defeated the Panthers on the road 42-13. That was a revenge game against Magnolia, who defeated the Camden Fairview in Cardinal Stadium with a 7-6 score in 2019. The Cardinals have been on a solid revenge season against rivals and conferences to get a mental edge on their opponents.

The offense for the Cardinals has been electrifying in passing and running the football this season. The Cardinals are averaging 43.3 points per game in six games. They are coming off the game against Arkansas High School where Cardinals quarterback Martavius Thomas had another dominating performance by throwing four touchdowns to four different receivers. So far this season, Thomas is eighth in the state in passing yards accounted for (1,388). He has a better quarterback rating (136) than five of the top passing yard leaders in the state, and he has a lower interception rate than 18 of the top passing quarterbacks in the state.

His strong arm and excellent decision-making will be key once again when facing a Panthers' defense that is inefficient in defending the passing game. Last week, the defense of Magnolia allowed Lakeside Rams quarterback Jordan Mills to throw for 378 yards, four touchdowns and one interception on 21 completions (out of 37 passing attempts). The defense of the Panthers allowed 593 total yards from the offense of the Rams. The Rams rushed for 215 yards on 27 carries for an average of eight yards per rush.

The Cardinals can establish their running game efficiently by dominating at the line of scrimmage with Thomas and senior running backs Ja'Coriae Brown and Ja'Toney McGhee. The offensive line for Camden Fairview will need to be efficient in picking up the blitzing defenders up the middle. Magnolia likes to constantly send their middle linebackers or their outside linebackers to create as much pressure on the opposing quarterback to overcompensate their lack of efficiency in the secondary.

The defense of the Cardinals has a big responsibility to suppress the heavy rushing offense of Magnolia. Last week, the front-seven of the Cardinals' defense faced a big and talented offensive line at Arkansas High School. This Friday night, Camden Fairview faces an offensive line that lives and breathes efficient run blocking. Last week, the offense for Magnolia ran the ball 54 times for 685 yards for an average of 12.7 yards per rush. They scored nine touchdowns on the ground against the defense of the Rams.

If the Cardinals can win this game by suppressing the strength of the Panthers, Camden Fairview could start the conference play with a 3-0 record against some of the top projected teams this season. The Cardinals and Panthers are set to play tonight at Camden Fairview at 7 p.m.