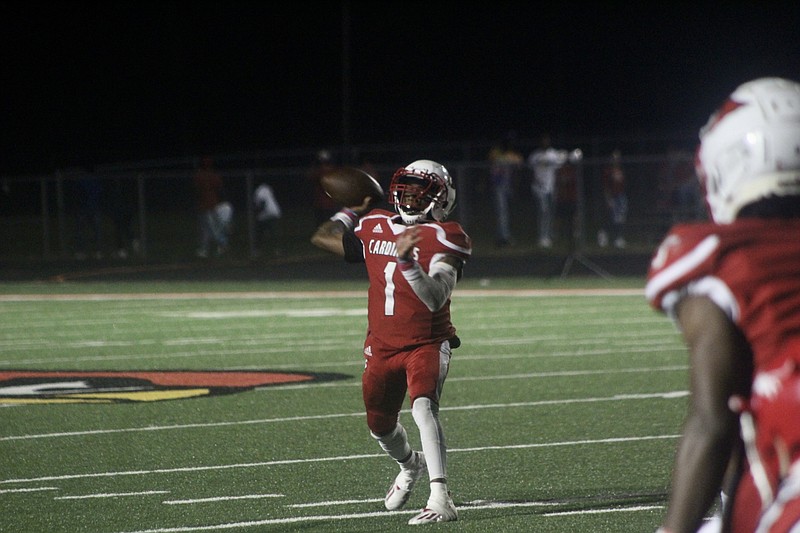 Photo By: Patric Flannigan Martavius Thomas looks downfield for a pass to Jarvis Reed during the fourth quarter of Camden Fairview’s game against Magnolia. The classmates were a threat to the Panther defense throughout the night.

The Camden Fairview Cardinals ( 6-1, 3-0) now have sole possession of the No. 1 spot in the 5A South Conference after defeating the Magnolia Panthers (2-4, 2-2) 44-25 at Cardinals Stadium on Friday night.

The teams traded body blows throughout the first half as each offense exerted its will on the ground. After forcing a Magnolia punt, the Cardinals would score first on after a 15-play drive capped by a two-yard run by Ja'Coriae "Bug" Brown. The Panthers retaliated with an eight-play, run-heavy drive of their own. Magnolia would score on a fourth and sixth when quarterback Dalen Blanchard found Kendrick Carry for a 28-yard touchdown pass with 20 seconds left in the first quarter. The ensuing PAT was no good.

The Cardinals would then go on a 14-play; 90-yard drive on their next possession that resulted in a ten-yard touchdoqn pass from Martavius Thomas to Jarvis Reed. Khan would again add the PAT to put the home team ahead 14-6 with 7:58 in the second quarter.

CF would benefit from an Unsportsmanlike Conduct penalty agains the Panthers, who had just been hit by a sideline warning after arguing if there was a fumble on the touchdown pass. The penalty would be assessed on the kickoff. The Cardinals opted to kick it short and it was fielded at the Magnolia 35-yard line. Panther fullback Deray Williams would go up the middle for a big 24-yard run to kick start the drive. Nine plays later, Blanchard would score on a seven-yard quarterback keeper with 3:55 left in the half. Magnolia's two-point conversion failed.

CF continued to rely on the ground game. The Cardinal offense got the ball at its own 35 after Magnolia kicked it out of bounds. The Cardinal only passed once on a seven-play march down the field. Brown would score his second touchdown on the night on a seven-yard run with 55-seconds left.

On the ensuing kickoff, Rashaun Bush would recover a fumble for the Cardinals at the Magnolia 20-yard. Ultimately, the Cardinals would attempt a 30-yard field goal, but was blocked by a Panther edge rusher.

The Cardinals received the ball to start the second half and decided to switch their offense by going to the air. Thomas fired a pass over several defenders into the outstretched hands of wide receiver AJ Alsobrook for a 53-yard pick up. A couple of plays later, Thomas found Michael Suell for a 15-yard touchdown. Khan's PAT was good, making it 28-12 with more than nine minutes left in the third.

It was the defenses' turn to come up with a big play as the Cardinals would recover a loose ball on the Panthers' first offensive snap of the second half. The Cardinals would take over at the Magnolia 47-yard line and move the ball down the field before being hit with penalties. CF had a big passing play called back and faced a first down and 42 at one point during the drive before Thomas found Reed for a 45-yard TD at the 5:29 mark putting CF up 35-12.

Magnolia would add a touchdown with about two minutes left in the third on an eight-yard run from Williams, but the Cardinals' offense would strike again with a five-yard touchdown pass from Thomas to a leaping Brandon Copeland. CF would also add a 30-yard field goal midway through the fourth quarter and Magnolia would score one last touchdown to set the final margin.

Brown finished with over 25 carries for over 230 rushing yards and two touchdowns. Thomas threw for over 330 yards and four touchdowns on 20 completions (out of 26 passing attempts).

The Cardinals will travel to DeQueen next Friday night to take on the De Queen Leopards (1-4).