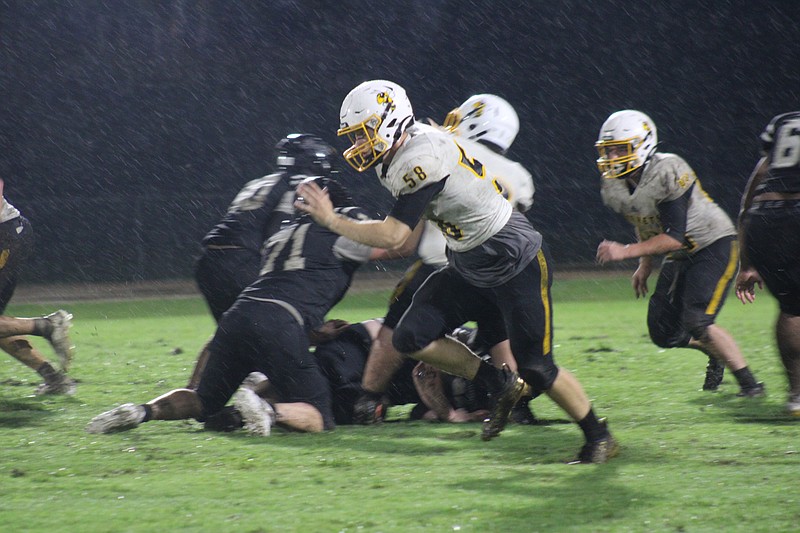 Photo By: Michael Hanich Harmony Grove defensive tackle Grant Bearden rushes into the backfield of Smackover in the rain

The Harmony Grove Hornets have one of the most impressive and dynamic defenses in south Arkansas.

They have several defenders that are making plays at plays at crucial portions of the game. While their schedule has been brutal, the defense for the Hornets remain strong. Every position group can be praised for their high efficiency, but it all starts up front with the big men of Harmony Grove in senior defensive tackles Walker Sweat and Grant Bearden.

Both Sweat and Bearden are two of the biggest playmakers along the defensive line for Harmony Grove. In their first game of the season versus the option-schemed offense of the Junction City Dragons, the Hornets defense remained strong enough to shut down any rhythm JC could have created. The defense shut out the Dragons and their dynamic rushing offense. Bearden accounted for five total tackles and two tackles for loss while Sweat accounted for seven total tackles, five solo tackles and two tackles for loss. The Hornets dominated the Dragons 39-0 in week one of the 2021 season.

In their first conference game of the season at home versus the Dollarway Cardinals, both Sweat and Bearden had dominating performances. The two defensive tackles were responsible for shutting down any running lanes of a run-orientated Cardinals' offense. Sweat accounted for five total tackles, three solo tackles and three tackles for loss. Bearden accounted for two tackles and two tackles for loss. The Hornets dominated the Cardinals 45-6 at home.

These players are the glue to this stout defensive run and the first line of defense for Harmony Grove. With a dangerous mixture of brute strength and agility, they are not the old traditional defensive tackles that will just clog up the line of scrimmage; they are hungry to make big plays.