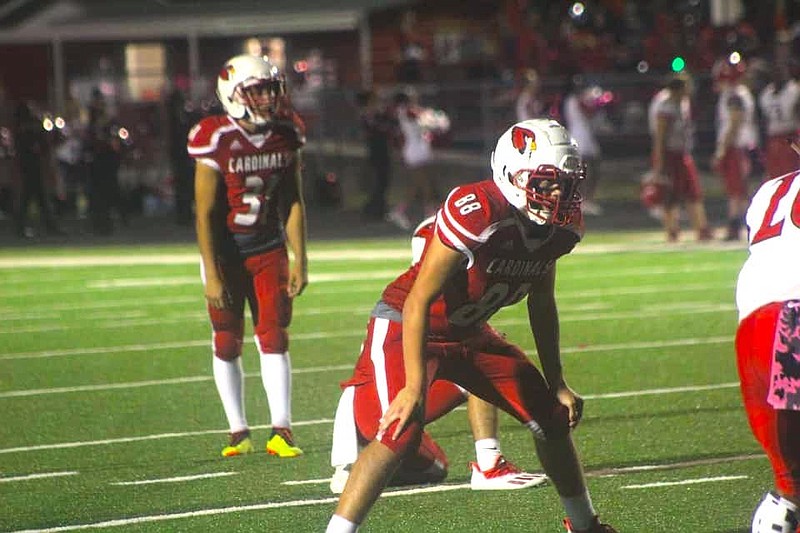 Photo By: Patric Flannigan Cardinals defensive end Kameron Easttam gets ready to block for a PAT

The wins keep stacking up for the Camden Fairview Cardinals (6-1) after they took down the Magnolia Panthers, 44-25. at home last week.

It was a stellar night for the entire team as they are just a few games away from securing their first conference title since 2012. There were several stars on both sides of the ball that made a tremendous impact to the Cardinals' big win over the Panthers.

On the offensive side of the ball for Camden Fairview, they were able to create a highly efficient gameplan that left the Panthers unable to slow down CF's rhythm. The offense for the Cardinals, led by junior quarterback Martavious Thomas, accumulated a total of 601 yards against the defense of Magnolia.

The defense of the Cardinals knew they were in a tough fight against a Panthers' offense that could consistently drive the ball down the field. There were several defenders for Camden Fairview that made an impact with junior defensive end Kameron Easttam having a standout performance.

Thomas and Easttam are Camden News's Offensive and Defensive Players of the week.

This is Thomas' fourth-time being Camden News's offensive player of the week this 2021 season. Thomas continues to be one of the most electrifying playmakers in the state of Arkansas with his explosive and dynamic running ability. In the game against Magnolia, Thomas had a nearly perfect game by throwing for 345 yards, four touchdowns and a quarterback rating of 157.9 on 20 completions.

Thomas was highly efficient in spreading the ball throughout the field to cause chaos in the secondary of Magnolia.

On the defensive side of the ball for Camden Fairview, the line was highly active in creating multiple stops against the offense of Magnolia. While defensive tackle Mark Welch and defensive end Jacovey Barker continued to be efficient even while being focused on by the offensive line of Magnolia, it was Easttam that was the star of the defense.

This is Easttam's first time being named defensive player of the week.

The junior led the team in total tackles accounted for with seven while also accounting for one tackle for loss. Easttam has accumulated 32 solo tackles, ten tackles for loss, three sacks and two quarterback pressures in the 2021 season. With most of the pressure focused on Welch and Barker, that opened up more availability for Easttam to potentially make big stops for the Cardinals' defense. Easttam was constantly crashing into the backfield of Magnolia and put constant pressure on the quarterback.

Camden Fairview continues to show they have one of the most talented defensive line units in the conference and the region.