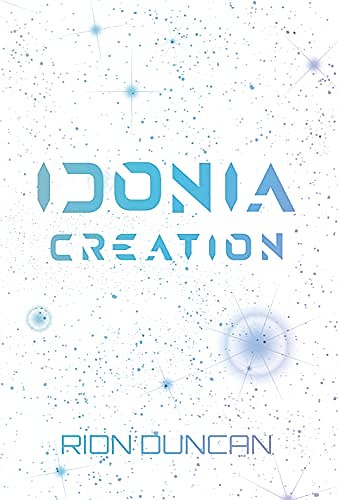 Submitted photo The cover of Rion Duncan's self published novel "Idonia Creation" features nebulas and star clusters meant to evoke a feeling of emptiness and a blank slate, according to the author. Duncan will appear at Native Dog tonight to sign his book.

Rion Duncan began writing the first draft of his new book, "Idonia Creation," while attending college at the University of Central Arkansas in Conway.

Now, what started as just an idea has become a full fledged self-published novel, and Duncan plans on continuing "The Idonia Saga" as a series.

"It's urban fantasy technically, but it gets more into the sci-fi in later books; the first book functions almost like a prequel to the later books, " Duncan said.

The story follows three friends as they move from south Arkansas attend UCA, much like Duncan did himself; but soon, the trio find themselves involved in the otherworldly affairs of the mysterious Browning family.

"I started on this in high school, but even then it was just characters and general storylines, " Duncan said. "I finished the first draft of the book eight or nine years ago."

Duncan said his love of sprawling science fiction epics like "Dune" and other series led him to build an entire world full of intricate details that may not even make his novels, but that help flesh out the setting of the world his characters enter.

Duncan said "The Expanse" series, by authors Daniel Abraham and Ty Franck, was also a major inspiration for his book in terms of world building, but he noted that the "Mass Effect" video games series -- a three game action role-playing game that details humanity's first steps into space after discovering faster than light travel -- also provided a template for his series.

"It's kind of a melding of all those things in my mind," Duncan said.

And just like those stories, Duncan's "Idonia Saga" will also span multiple books.

"It's leaning more towards eight books as I get further into it. This is going to be a long lengthy work. I have the ending already determined and a number of the points along the way; now it's just connecting the pieces," Duncan said.

As a self published author, Duncan didn't have the luxury of a publishing company to edit his manuscript or even to design his book cover.

Duncan said, "I have had group editing. I have friends that have done content editing. I have two in particular -- my friends Levi Sowerby and Evan Wheatley, who lives here in town, did a lot of heavy editing near the end.

He created the font for his book cover and wanted compelling fantasy/technological imagery to draw readers in.

"I don't know what it really looks like to be honest. I wanted it to look strange. I created a book cover that I would, in a book store, pick up and go 'Hey, what is this book?'" he said. "It's a very unassuming cover. It doesn't give you a lot. I don't want to give you stuff on what the book is. You decide."

Duncan said his novel would best resonant with 20 year-olds, who are in the same time of life as the main characters. He said he hopes that readers will form a connection with his characters in much the same way that children felt kinship with the "Harry Potter" characters.

Duncan's book is on sale on Amazon, as well as at select book stores within the state. He will appear at a book signing tonight at Native Dog Brewing as part of the brewery's "Area Night".