Supply, patient choice, ease to determine who gets what by Compiled Democrat-Gazette Staff From Wire Reports | October 20, 2021 at 7:05 a.m. 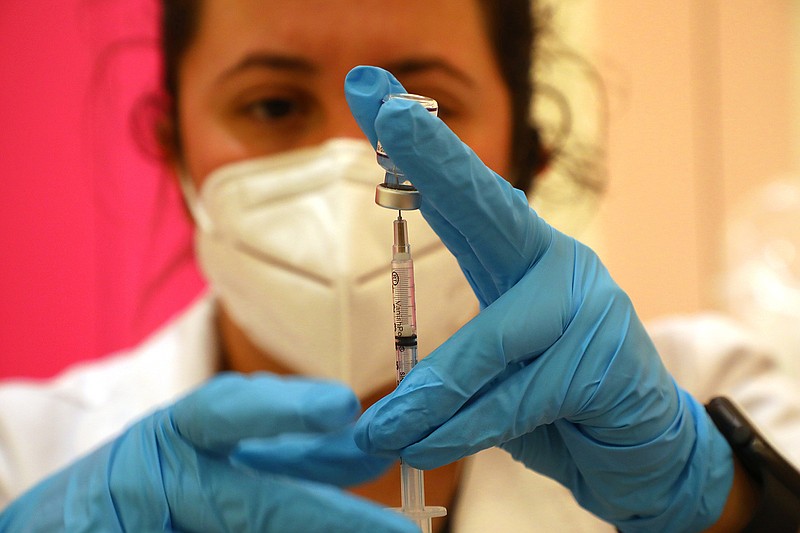 FILE &#x2014; A medical worker prepares a COVID-19 vaccine booster in San Rafael, Calf., on Sept. 29, 2021. Vacccinations typically consist of two or more doses of the same vaccine, but the Food and Drug Administration is expected to authorize a mix-and-match strategy for COVID-19. (Jim Wilson/The New York Times)

WASHINGTON -- The Food and Drug Administration is planning to allow Americans to receive a different covid-19 vaccine as a booster than the one they initially received, a move that would provide flexibility to doctors and other vaccinators.

The government would not recommend one shot over another, people familiar with the agency's planning said. But vaccine providers could use their discretion to offer a different brand, a freedom that state health officials have been requesting for weeks. The FDA may also say that people should generally stick to the same vaccine if possible, according to the two federal officials, who spoke on condition of anonymity because they were not authorized to discuss the issue.

Johnson & Johnson's vaccine has been shown to be less effective than the Pfizer-BioNTech and Moderna vaccines, so there is intense focus on how to boost protection for recipients of the single-shot Johnson & Johnson regimen.

"People should generally get the same vaccine as their initial series," said one of the federal officials familiar with the situation. But the official said people in nursing homes might not have access to their original vaccine, or that some people might have had a bad reaction to the mRNA vaccines, the technology used to make the Pfizer-BioNTech and Moderna shots.

[Video not showing up above? Click here to watch » https://www.youtube.com/watch?v=I88TzDV_fEo]

The approach was foreshadowed Friday, when researchers presented the findings of a federally funded "mix and match" study to an expert committee that advises the Food and Drug Administration. The study found that recipients of Johnson & Johnson's single-dose shot who received a Moderna booster saw their antibody levels rise 76-fold in 15 days, compared with only a fourfold increase after an extra dose of Johnson & Johnson.

Federal regulators this week are aiming to greatly expand the number of Americans eligible for booster shots. The FDA is expected to authorize boosters of the Moderna and Johnson & Johnson vaccines by today; it could allow the mix-and-match approach by then. The agency last month authorized booster shots of the Pfizer-BioNTech vaccine for at least six months after the second dose.

An advisory committee of the Centers for Disease Control and Prevention will take up the booster issue Thursday; the agency will then issue its own recommendations. By the end of the week, tens of millions more Americans could be eligible for extra shots.

The National Institutes of Health researchers tested a full dose of Moderna's vaccine for a booster shot, but regulators are also considering whether to authorize a half dose.

Experts emphasized last week that the new data was based on small groups of volunteers and short-term findings. Only antibody levels -- one measure of the immune response -- were calculated as part of the preliminary data, not the levels of immune cells primed to attack the coronavirus, which scientists say is also an important measure of a vaccine's success.

The study's researchers warned against using the findings to conclude that any one combination of vaccines was better. The study "was not powered or designed to compare between groups," said Dr. Kirsten Lyke, a professor at the University of Maryland School of Medicine, who presented the data.

While the research on mixing and matching doses is somewhat thin, even some scientists who have strongly criticized the Biden administration's booster policy said providers should be given a measure of discretion as the campaign ramps up.

"If you look at the data, it certainly looks like it might be better," Dr. Paul Offit, director of the Vaccine Education Center at Children's Hospital of Philadelphia, said of Moderna or Pfizer boosters for Johnson & Johnson recipients. "I think we should move quickly on this, because it's already happening."

At the meeting Friday of the FDA's expert panel, of which Offit is a member, top CDC officials argued that providers needed latitude to offer different vaccines as boosters because patients might have had adverse reactions after their initial shots or presented other new concerns. Providers also might not have access to a vaccine a patient initially received, they said.

The federal government will cover the cost of a different vaccine as a booster only if the FDA authorizes the approach, officials said.

"I'd like to reiterate how important it is from a programmatic perspective to have a little bit of flexibility," Dr. Melinda Wharton, a top vaccine official at the CDC, told the FDA panel.

"From a public health perspective, there's a clear need in some situations for individuals to receive a different vaccine," said Dr. Amanda Cohn, another high-ranking CDC official.

Both Moderna and Pfizer require two initial doses, separated by about a month. Regulators are expected to follow the same approach they took with Pfizer's vaccine and authorize a booster of Moderna's vaccine about six months after the second shot. Johnson & Johnson is headed for a booster shot of its vaccine at least two months after the first dose.

State health officials have been arguing for weeks that recipients of booster shots should not be strictly bound to the vaccine they initially received, for reasons such as supply, patient choice and ease of administration.

"The No. 1 thing I heard from state health secretaries was the need for permissive language around a mix-and-match approach," said Dr. Nirav Shah, Maine's top health official and president of the Association of State and Territorial Health Officials.

Dr. Clay Marsh, West Virginia's covid-19 czar, said the state had a greater supply of Moderna and Pfizer-BioNTech vaccines than of Johnson & Johnson's, so officials there might prefer to use them for boosters out of convenience. Others said the option of switching vaccines could streamline the administration of boosters.

"The impetus for states and local health departments was that if they were going to go out to a community site or long-term care facility and start providing boosters, it was a little inefficient to show up somewhere and say, 'We're just doing the people who got Pfizer,'" said Dr. Marcus Plescia, chief medical officer for the Association of State and Territorial Health Officials. "When you have a captive audience, you want to take advantage of that."

Yet more options could lead to more confusion about booster shots, some experts have said. The FDA this week is expected to authorize boosters for all Johnson & Johnson recipients 18 and older. But the only Moderna recipients who are expected to become eligible for boosters are those who are at least 65 or otherwise considered at high risk, following the same eligibility requirements for recipients of Pfizer-BioNTech's vaccine.

Jeannette Lee, a biostatistician at the University of Arkansas for Medical Sciences and a member of the FDA's expert committee, warned Friday that allowing people to switch from their original vaccine type could be "very, very messy in terms of the messaging."

It remains unclear what dosage of Moderna's vaccine might be authorized for use as a booster for recipients of other vaccines. Last week, the advisory committee voted unanimously to recommend that Moderna recipients receive a third shot of that vaccine as a booster, but at only half a dose.

Dr. Anthony Fauci, the government's top infectious disease expert, publicly suggested Sunday that the government was headed toward granting greater leeway, at least for Johnson & Johnson recipients. "I believe there's going to be a degree of flexibility of what a person who got the J&J originally can do, either with J&J or with the mix-and-match from other products," he said on "Fox News Sunday."

Just over 15 million people have been fully vaccinated with Johnson & Johnson's vaccine, compared with 69.5 million for Moderna's and 104.5 million with Pfizer-BioNTech's.

Information for this article was contributed by Sharon LaFraniere and Noah Weiland of The New York Times; and by Laurie McGinley and Carolyn Y. Johnson of The Washington Post.