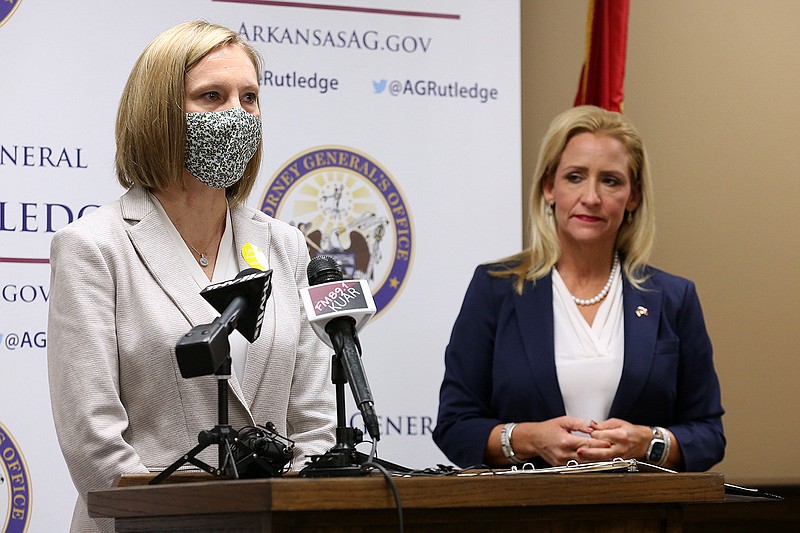 Amanda George (left), vice chancellor for finance at the University of Arkansas for Medical Sciences, and Arkansas Attorney General Leslie Rutledge on Wednesday discuss the more than $10 million lawsuit that Rutledge’s office has filed against Med-Care Health Link of Virginia. “I think they definitely acted in a way our normal vendors don’t act and took advantage of a situation where we were in critical need,” George said. (Arkansas Democrat-Gazette/Thomas Metthe)

Already at its lowest level in almost four months, the number of people hospitalized with covid-19 in Arkansas fell Wednesday for the second day in a row.

The state's count of cases rose by 559, the second daily increase in a row that was smaller than the one a week earlier.

Arkansas' death toll from the virus, as tracked by the Department of Health, rose by 19, to 8,325.

"New cases are lower than last week and our vaccine doses more than doubled," Gov. Asa Hutchinson said in a tweet.

"I'm encouraged by the uptick in vaccinations across Arkansas. Booster doses are available, and vaccines for ages 5-11 will be available soon, but we still need more first doses."

The number of covid-19 patients in the state's hospitals, at its lowest level since July 5, fell Wednesday by 14, to 366.

Already at its lowest level since July 14, the number of the state's virus patients who were on ventilators fell by two, to 111, after not changing a day earlier.

After rising the previous two days, the number who were in intensive care fell by eight, to 174.

The number of intensive care unit beds in the state's hospitals that were unoccupied, however, fell by six to 142, as a result of more non-covid-19 patients who were in intensive care.

People with covid-19 made up about 16% of all of the state's intensive care patients Wednesday, down from about 17% a day earlier.

As a result, the average daily increase over a rolling seven-day period fell to 434, its lowest level since the week ending June 30.

With new cases outpacing recoveries and deaths, however, the number of cases in the state that were considered active rose by 16, to 4,842, after falling the previous four days.

Dr. Jennifer Dillaha, the Health Department's chief medical officer, said the state's daily case increases are "consistent with what we've seen with the delta variant, where we would have downward trends after a peak."

But she noted that in some places, such as the United Kingdom, a downturn has been followed by a resurgence.

"We'll have to see if we have an upward trend," she said.

Also Wednesday, Attorney General Leslie Rutledge announced that she had filed a lawsuit contending that a Virginia-based medical supply company scammed the University of Arkansas for Medical Sciences and the state Department of Finance and Administration out of almost $11 million that was paid for personal protective equipment and ventilators at the start of the pandemic.

The suit, filed Wednesday in Pulaski County Circuit Court, accuses Med-Care Health Link LLC and others of failing to provide $10,940,000 worth of PPE and ventilators.

"Unfortunately UAMS and the Department of Finance and Administration made very large purchases from unscrupulous characters," Rutledge said.

UAMS and the department paid Med-Care almost $11 million to purchase gowns, face shields and 560 ventilators, according to the lawsuit.

To date, Med-Care has failed to deliver these goods or refund the money, the suit says.

"At a time when Arkansans were most desperate for equipment to protect their health and safety, Med-Care took advantage of one of Arkansas's largest hospitals and violated the trust of millions of Arkansans," Rutledge said in a news release.

"I will never let a company exploit Arkansans and that is why I am holding Med-Care accountable for stealing from the State during one of our most vulnerable times."

The state seeks a refund of the $10,940,000 with interest and civil penalties of up to $10,000 for each Arkansas Deceptive Trade Practices Act.

Rutledge said the state and UAMS had done business with this company before and didn't have reason to believe they were going to be scammed.

"Unfortunately these individuals and this company chose not to follow through with the commitment that they made to purchase these ventilators and other PPE," she said.

Amanda George, vice chancellor for finance and chief financial officer at UAMS, said paying up-front for medical supplies is not standard practice, but it was a trend during the pandemic because of vendors wanting to ensure that the health-care facilities had the cash on hand when it came to obtaining these scarce resources.

"I think they definitely acted in a way our normal vendors don't act and took advantage of a situation where we were in critical need," she said.

George said the hospital was able to work with other vendors to get some of the PPE, but when it came to the ventilators they didn't enter another agreement.

"These ventilators that were purchased were in preparation for the upcoming surge," she said.

Rutledge said at the onset of the pandemic the state sought to obtain medical supplies and PPE in anticipation of an onslaught of covid-19 cases.

"At the beginning of the pandemic we saw the scramble for the health equipment that we all desperately needed," she said.

"Whether we needed it in our individual hospitals, in our homes, our schools, our first responders, across the world and right here in Arkansas, people were scrambling for that equipment."

The Finance and Administration Department also sought to obtain medical supplies and PPE to be used by the state agencies and departments, and distributed to medical care facilities around the state.

The department turned to UAMS to help procure the equipment.

They paid a total of $8.6 million that was provided to the state agency out of the federal Coronavirus Aid, Relief, and Economic Security Act.

In March 2020, the department purchased 2.5 million gowns from Med-Care for a total of $3 million with delivery of the goods to be made to the Arkansas Department of Public Safety's Division of Emergency Management.

On April 13, 2020, the Finance and Administration Department ordered 500 ventilators from Med-Care for a total of $4.5 million, with delivery of the goods to be to the same division.

On April 15, 2020, the state ordered a million medical face shields from Med-Care for a total of $1.1 million.

To date, Med-Care has failed to deliver any of the goods purchased by the state, and the medical supply company has refused to return any of the money, according to the lawsuit.

Sherri Robinson, associate general counsel for UAMS, said approximately four to six months after they made the order with Med-Care they began to have difficulty communicating with the vendor officials.

"We made several attempts at that point to get the money returned or the product delivered," she said.

Representatives for UAMS said they attempted via telephone, email and text to track down the medical supplies they purchased from Med-Care Health Link.

Shannon Halijan, deputy attorney general for Consumer Protection, said Med-Care gave multiple responses about where the medical supplies were, including statements that the products were in California or Virginia or even sold by the Chinese manufacturer to someone else.

"Various excuses were made," she said.

Med-Care refused to produce documentation to support the claims, according to the suit.

UAMS said it also attempted to negotiate the purchase of different items with the funds already held in escrow, but the health supplier refused to negotiate an alternate purchase arrangement.

Rutledge said she wasn't aware of any other states dealing with similar problems when it comes to Med-Care.

According to rankings from the U.S. Centers for Disease Control and Prevention on Wednesday, Arkansas had the 13th-lowest number of new covid-19 cases per 100,000 residents among the states and the District of Columbia for the week ending Tuesday, down from 16th-lowest a week earlier.

In new deaths, however, Arkansas went from having the 28th-highest rate to the 22nd-highest as its number per 100,000 residents over seven days rose from 2.3 to 2.8.

Within Arkansas, Benton County had the most new cases Wednesday with 83, followed by Washington County with 48, and Pulaski County with 39.

Dillaha said 18 of the deaths reported Wednesday happened within the past month, and the other was earlier in September.

The number of people who have ever been hospitalized in the state with covid-19 grew Wednesday by 35, to 27,496.

The number of the state's virus patients who have ever been on ventilators with covid-19 rose by four, to 2,897.

Meanwhile, the Health Department's tally of vaccine doses that have been administered rose by 12,751, the biggest one-day increase in more than a month.

Third doses, which were authorized last week for a wider group of people who received the Moderna vaccine, made up 65% of the increase.

First doses have also been on the rise in recent days, however.

On Wednesday, the number rose by 2,560, the biggest one-day increase in more than a week.

The average number of total doses administered each day over a rolling seven-day period rose to 7,727, the highest average since the week ending Oct. 8.

Similarly, the average number of first doses administered each day rose to 1,785, the highest average since the week ending Oct. 10.

The averages for both total doses and first doses, however, remained well below the levels they reached during the summer.

According to the CDC, the percentage of Arkansans who had received at least one vaccine dose rose from 57.6% Tuesday to 57.7%, while the percentage who were fully vaccinated remained at 47.7%.

The number of Arkansans who had received booster doses rose by 8,075, to 120,583, representing 8.4% of the fully vaccinated population.

Among the states and the District of Columbia, Arkansas continued to rank 37th in the percentage of its residents who have received at least one vaccine dose and 43rd, ahead of Tennessee, Louisiana, North Dakota, Mississippi, Alabama, Wyoming, Idaho and West Virginia, in the percentage who were fully vaccinated.

Nationally, 66.5% of people have received at least one dose, and 57.5% were fully vaccinated.

Of the fully vaccinated population nationally, 7.6% have received booster doses.