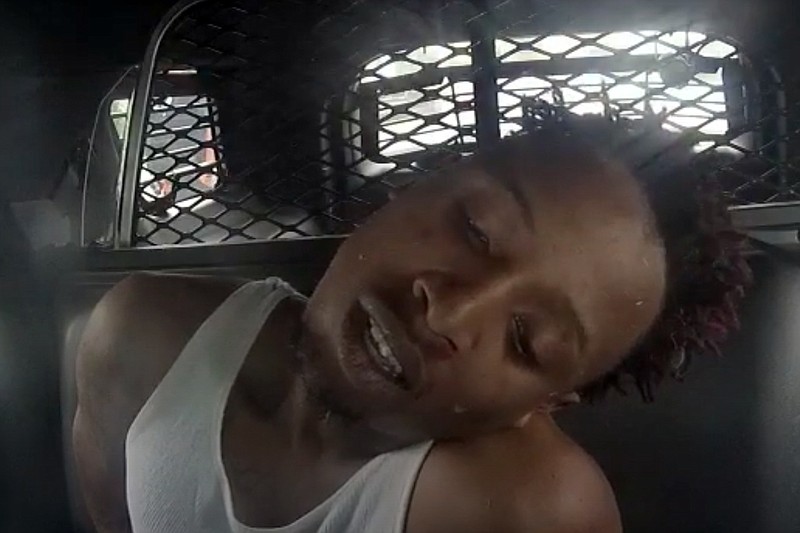 TEXARKANA, Texas — When a 23-year-old who died in police custody in 2019 told officers he couldn’t breathe, he was accused of “felony faint,” according to a wrongful death lawsuit filed Sunday in federal court in Texarkana.

The complaint filed on behalf of the mother of Darren Boykin accuses Texarkana Texas Police Department officers Jerrika Weaver and Brent Hobbs and Sgt. William Scott of violating Boykin’s civil rights by being “deliberately indifferent” to a medical crisis, resulting in his death.

Boykin was confronted by Texarkana College police officers in a building on campus sometime around 2 p.m. Aug. 29, 2019, according to the complaint. They suspected Boykin was responsible for a series of petty thefts and sought to take him into custody. Boykin allegedly pushed his way past the officers and fled on foot.

Boykin ran in the August heatfrom the community college building to property next to a convenience store located at the corner of College Drive and Richmond Road, about a half mile, before he was detained. Video from Weaver’s body camera shows Boykin was on the ground with his hands cuffed behind his back, breathing heavily, when Weaver arrived to assist the Texarkana College officers.

As Weaver approaches, a civilian bystander can be heard saying, “I thought he was having a heart attack.” A Texarkana College officer responds that Boykin has “felonies, that’s what it is.”

As the officers tell him to walk to Weaver’s patrol car, Boykin complains that he can’t and three officers carry him and place him in the back seat. A search of Boykin’s pockets reveals an Ohio driver’s license and officers determine he has a felony warrant for theft in that state, according to body camera footage.

Hobbs arrives and gives a bottled water to a Texarkana College officer but no water is offered to Boykin.

In response to Boykin yelling for help while in the cruiser, Hobbs opens the door briefly; but does not call for emergency medical help whenBoykin tells him, “I can’t breathe.”

When Hobbs tells Weaver that Boykin is complaining of an inability to breathe, Weaver responds, “He’ll be fine.”

The suit accuses Weaver of showing a “clear disregard” for Boykin’s health once she is told he has a felony warrant.

“You can’t call I can’t breathe after you ran forever and then you have felonies,” Weaver can be heard stating in a body camera recording as she stands outside the patrol unit.

When Scott arrives, Hobbs mentions Boykin’s complaint of being unable to breathe to him.

Before Weaver begins driving Boykin to the Bi-State Justice Building for booking into the Bowie County jail, Boykin has repeatedly asked for help, complained that his leg hurts and urged that he couldn’t breathe.

The ride to jail and a “fun fact”

The dash camera in Weaver’s patrol unit captures a close-up view of Boykin as he sits in the back with his hands cuffed behind him.

Before the car begins to move, Boykin asks for help “back here” and complains that his leg hurts and he is unable to breathe. Boykin’s breathing is heavy and he appears to struggle to hold his head upright.

In response to a plea for help, Weaver replies, “I’m gonna help you get to the jail.”

As Weaver drives toward downtown Texarkana to the Bi-State, Boykin states, “Ma’am, I’m about to pass out.”

Weaver tells him to “just lean against the glass,” of the cruiser’s window and continues driving.

As Weaver ends a call on the cell phone she is holding, Boykin lists forward and from side to side. Weaver tells him he will get water in the jail.

Boykin is leaned to the side and appears to be making involuntary movements asWeaver asks him questions about where he was staying, whether he knows he is “still going to jail,” and if he is comfortable.

“Defendant Weaver then began humming, showing a complete disregard for the human being who could not breathe, had been begging for help in her backseat, and was actively dying,” the complaint alleges.

Boykin is unresponsive as Weaver asks him if he is getting “air,” referring to air conditioning.

“You know somebody that passes out isn’t able to stop themselves from falling forward right? Fun fact,” Weaver states as she continues driving to the Bi-State and past Wadley Regional Medical Center.

As Weaver glances again toward her prisoner, Boykin slumps over and is non-responsive.

After Weaver pulls into a parking slot in the Bi-State basement, she gets out and opens a rear door.

“And I’m not picking you up and dragging you in there. Quit playing. Let’s go. Let’s go,” Weaver can be heard saying on her body camera.

Boykin is silent as Weaver calls his name and pats his leg. He doesn’t react when Weaver rubs his chest. Weaver calls, “Sarge,” as she pulls Boykin from the car and onto the cement floor of the basement. She immediately begins CPR and stops only to check Boykin’s neck for a pulse.

Another officer works to unlock the cuffs and free Boykin’s hands from behind his back as Weaver continues chest compressions. Emergency medical help is summoned as officers continue CPR.

Weaver can be heard on her body camera stating: “He said he was gonna pass out but he is also being charged with a bunch of felonies so it’s one of those things.”

“You know how he’s got the felony faint in the backseat? ‘Oh I’m gonna pass out.’ He’s fine. He kept saying he was tired, his legs hurt, he kept wanting to lay down. Normal stuff when you’re getting charged with felonies,” Weaver states on the body camera.

Weaver acknowledges that she doesn’t know what occurred prior to her arrival at the scene of Boykin’s arrest.

A custodial death report prepared by Texarkana College police and submitted as required to the Texas Attorney General states that Boykin’s death was “natural” and notes “complications of sickle cell trait,” as found at autopsy.

A person with only a sickle cell trait, meaning they inherited the gene from one parent and not both, typically does not exhibit the symptoms experienced by a person with Sickle Cell Disease, according to the Centers for Disease Control website.

Addison, Texas, lawyers Scott Palmer and James Roberts filed the suit on behalf of Darren Boykin’s mother, Keisha Boykin, and his estate in the Texarkana Division of the Eastern District of Texas. The suit alleges civil rights violations stemming from a lack of medical attention and alleges the three officer defendants breached their duty to provide it.