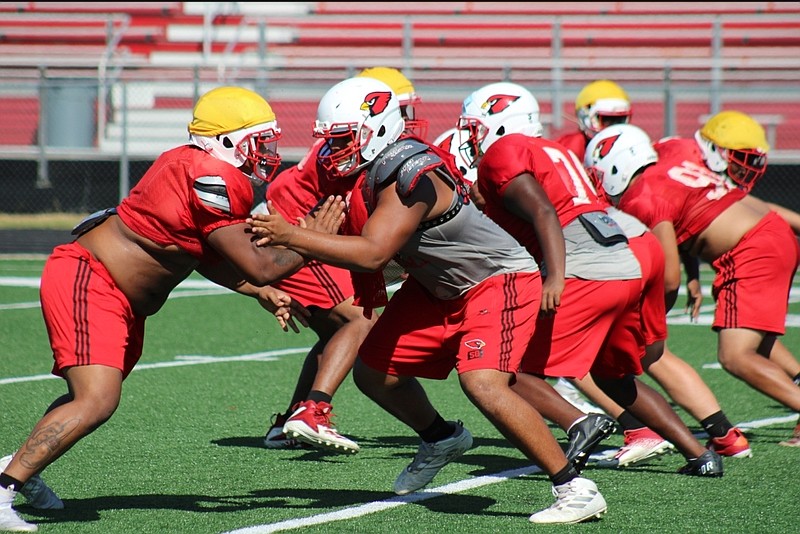 Several high school programs produce collegiate stars consistently. In this area, it is rare to see a collection of college spotlight on high school athletes. The Camden Fairview Cardinals have several of their players getting looked at for college football, but left tackle Timothy Dawn is one of their biggest players, physically and metaphorically. 247Sports lists Dawn as a 6-5; 280 pounds tackle for the Cardinals.

On March 6th, Dawn made a hard commitment to the Baylor Bears of the Big 12. Dawn currently has nine offers from collegiate programs, including the Arkansas State Red Wolves, the Arizona Sun Devils, the Kansas Jayhawks, and the Missouri Tigers. 247Sporst also has him being looked at by the Arkansas Razorbacks, the Auburn Tigers, the Northwestern Wildcats, the Ohio State Buckeyes, the Oklahoma Sooners, the Ole Miss Rebels, the Oregon Ducks, and the Penn State Nittany Lions.

When asked why he chose the Baylor Bears early after Tuesday's practice, Dawn responded. "They had a Christian school and a relationship I built with the coaches that quick, and I already felt it was the school for me."

According to 247Sports, Dawn ranks the 16th best player in the state of Arkansas in the class of 2022. He also ranks as the 60th best interior offensive lineman by 247Sports. Dawn currently plays at left tackle as he protects the blindside of Cardinals dual-threat, explosive quarterback Martavius Thomas.

As a pass-protector, Dawn is solid and consistent as he is a powerful and speedy blocker. He has a quick pass protection drop as he can reach the quick and explosive pass rushers. He also possesses great power in his punch and stability to stand firm.

One of the biggest factors in the blocking abilities that defined Dawn as a blocker as well as the offensive schemes for the Cardinals is his ability to pull and reach block. Dawn has quick feet and turns his hips quickly as he pulls behind his fellow offensive linemen to attack the other side of the defense. Timothy possesses a combination of speed, power, stability, along with great mechanics that make him an excellent run blocker.

He, along with other division one offered teammates, look to be the leaders of the Cardinals as they chase for the 5A state title. Dawn and fellow offensive tackle/defensive tackle Mark Welch will use their experience to lead this talented, playoff-contending Cardinals team. Welch is currently committed to play for the Central Arkansas Bears. When asked about having the experience and leadership from players with collegiate offers will impact the team, Dawn responded, "It's a great experience for everyone on the team, the young guys look up to us, so we got to be on point every day and make sure we are looking hard and excited every day."

Dawn will look to finish his senior season strong as he hopes to lead the Cardinals deep into the playoffs.