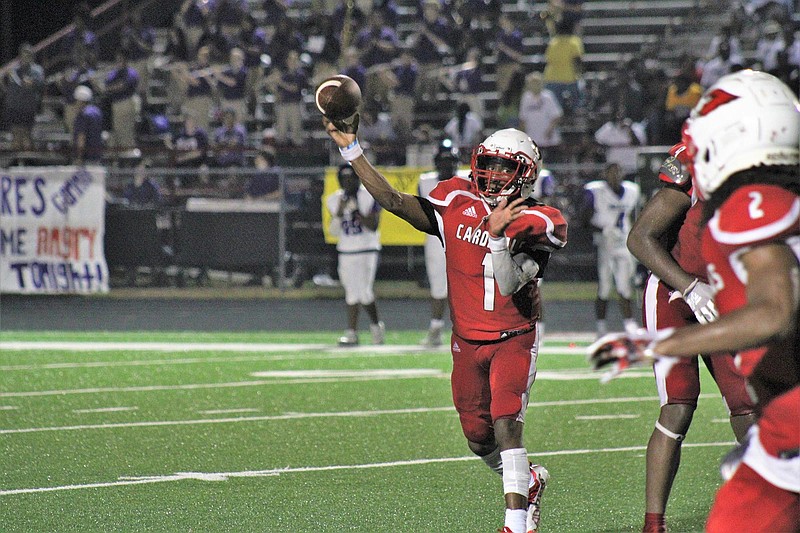 Camden Fairview quarterback Martavius Thomas scrambles as he attempts to pass the ball.

The Camden Fairview Cardinals came into the 2021 high school football season with a chip on their shoulder. Last season, the Cardinals had one of their most underwhelming seasons since 2017. The Cardinals accounted for a 6-6 overall record, despite having the talented roster and the resources to succeed. Junior quarterback Martavius Thomas is among the players that strive to get Camden Fairview to the next level.

The Cardinals have been to produce several explosive and speedy on the offensive side of the ball. Thomas is another product of the school’s ability to highlight his speed and athleticism. These are not the only attributes that define a playmaker. While he has speed and elusiveness, he is also a powerful and aggressive dual-threat. Thomas is a player that can run the RPO through his high football IQ and great instincts.

His playmaking abilities don’t stop at him being a threat in the running game. Thomas possesses a powerful arm that allows him to consistently air the ball deep to his receiving. He has a solid progression in his throws and an excellent release. He is also able to throw to a clear window for his receivers to catch the ball due to his accuracy.

Despite being 5-9, 160 pounds, his smaller size is not an issue when looking for his receivers in the middle of the field. Thomas has a style of play and physical similarities to 2019 NFL Offensive Rookie of the Year in Arizona Cardinals quarterback Kyler Murray. Both players are smaller in size and frame, but Thomas and Murray both possess a strong arm to throw passes deep consistently, they are efficient in RPO situations, both are aggressive, speedy, and both are high-caliber baseball players.

Thomas is currently committed to the University of Arkansas to play baseball for the Razorbacks. Similar to how he plays on the football field, Thomas uses his speed and aggressive fielding and base-running portions of the game. Like how he throws the football, Thomas possesses a consistent moving swing in his batting game.

Thomas also possesses a strong mentality to win on the field. Last Thursday, when the Cardinals hosted the El Dorado Wildcats, Thomas helped get the team back into a one-possession game down by at least 18 points in two different portions of the game. Thomas threw for 239 yards and a touchdown against the Wildcats.

In week one against the Arkadelphia Badgers, Thomas threw for 164 yards and a touchdown on nine completions (out of 16 passing attempts). He also rushed for 84 yards on 12 carries. Thomas isn’t a quarterback that tied to one receiver in the passing game. He will even distribute the ball throughout the field.

Even as a junior, Thomas is one of the vocal and outspoken leaders on this Cardinals team. He will be the leader the rest of the players will turn to for support on the field and on the sidelines during games. While the season is young, there is a clear indication that Thomas is miles better in his performance in 2021 than this past season for Camden Fairview. Thomas will look to get better every week as he expects he expects his teammates on both sides of the ball to do the same.