Texas NAACP files federal complaint over "The Eyes of Texas" 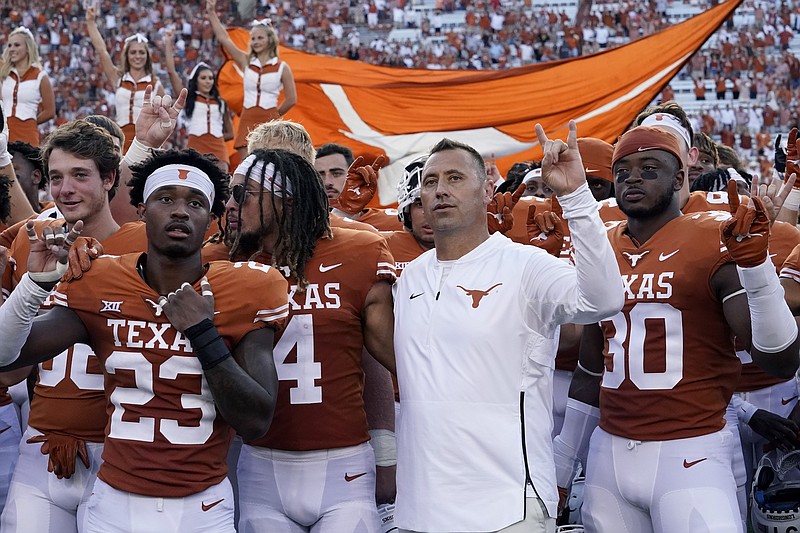 In this Saturday, Sept. 4, 2021, file photo, Texas head coach Steve Sarkisian, center, joins players in singing "The Eyes of Texas" after an NCAA college football against Louisiana-Lafayette, in Austin, Texas. The Texas chapter of the NAACP and a group of UT students have filed a federal civil rights complaint against the University of Texas for its continued use of “The Eyes of Texas” school song, tune with racist elements in its past. The complaint filed Friday, Sept. 3, 2021, with the U.S. Department of Education alleges that Black students and faculty are being subjected to violations of the Civil Rights Act and a hostile campus environment. (AP Photo/Eric Gay)

AUSTIN, Texas (AP) -- The Texas chapter of the NAACP and a group of students have filed a federal civil rights complaint against the University of Texas for its continued use of school song "The Eyes of Texas," which has racist elements in its past.

The complaint filed Sept. 3 with the U.S. Department of Education alleges that Black students, athletes, band members, faculty and alumni are being subjected to violations of the Civil Rights Act and a hostile campus environment over the "offensive," "disrespectful" and "aggressive" use of the song.

The NAACP and the students want the federal government to withhold funding from the university.

Gary Bledsoe, president of the Texas NAACP and a Texas law school graduate, on Wednesday sharply criticized Texas for requiring the Longhorn Band to play the song at athletic events, and expecting athletes to stand and sing it after games.

"It's like slave owners making slaves buck dance for their entertainment," Bledsoe said.

The song was played before and after Saturday's season-opening football win over Louisiana-Lafayette and was given a full-throated sing-along by a crowd of about 80,000. Many Texas players gathered near the band during the song, as has been tradition for decades.

First-year football coach Steve Sarkisian has said the team will sing the song.

The complaint, which includes statements from several anonymous students, alleges those who oppose the song on campus are being harassed and that Black students feel "humiliated" whenever it is played or sung.

A university spokesman did not immediately respond to a request for comment.

"The Eyes of Texas" was written in 1903 and has a history of performances in minstrel shows with musicians often in blackface. For decades, it has been sung after games and graduation ceremonies, and is a popular sing-along at weddings and even funerals.

Last year, a group of athletes and students called for the school to drop the song amid racial injustice protests after the killing of George Floyd by a Minneapolis police officer.

School President Jay Hartzell, with the full backing of the university's Board of Regents, said the song will stay and a school research panel determined there was " no racist intent " behind it.

In April, the university announced the school would create a separate band in 2022 for students who don't want to play "The Eyes of Texas."

The complaint argues that forcing students who object to the song into a different band is an attempt to create a "separate but equal" alternative that violates constitutional equal protection standards.