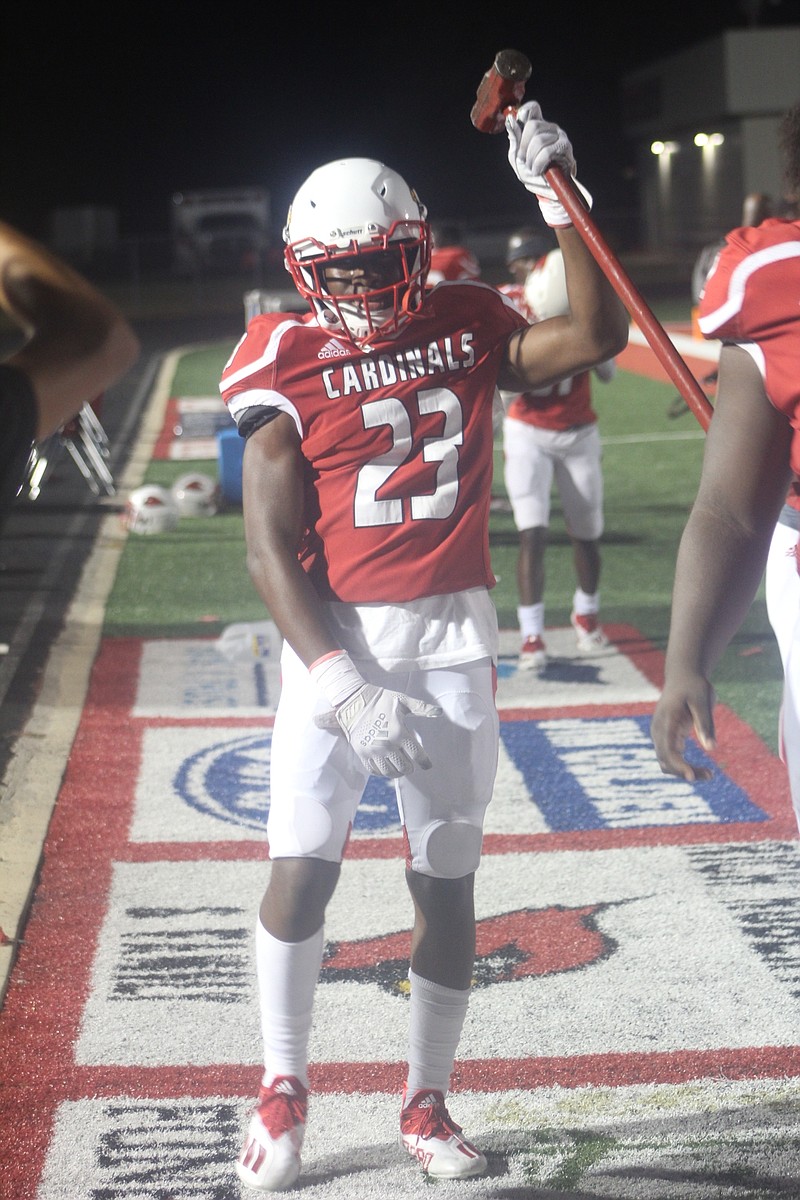 The Camden Fairview Cardinals took to the air early and often on its way to a dominating 52-0 win at home against Hamburg on Friday night.

The Cardinal offense nearly compiled 400 yards in the first half alone as Martavius Thomas completed 13/21 passes for 300 yards and 4 touchdowns. He ran for another touchdown to go along with a 47 yard touchdown run by JaToney McGee and 19 yard rushing touchdown by Jacoriae "Bug" Brown. Nasir Khan was a perfect 7/7 on PATs throughout the night and added the Cardinals final points by way of a 37 yard field goal in the second half.

The Lions would give the ball back three plays later when sophomore cornerback Jabauree Lockhart intercepted a pass at midfield. A loss of 5 yard on the ensuing run play and a penalty put the Cardinals at their own 40 yard line before Thomas found Reed on a 15 yard slant route and he outran the Hamburg secondary for a 60 yard touchdown.

The defense forced another three and out and a punt to the CF 48. Thomas would find Brandon Copeland - who wore the number 12 in the first half as a tribute to CF student athlete Tyler Kelley who passed away four years ago to the date - for a 16 yard gain. On the next play, Thomas kept it on a quarterback read and ran for a 36 yard touchdown.

Hamburg would have its longest offensive drive on the night going 8 plays before fumbling the ball at the CF 43. Four plays later, Thomas would connect with senior wide receiver Micheal "Pete" Suell who came up with a big grab over a defender attempting to knock the ball down.

Carson McKinney showed no after effects of a scary leg injury he sustained during the scrimmage game , as he made plays on both sides of the ball during the game , but one of his highlights on defense was an interception near midfield. Jatoney McGee would then take his first and only carry for a 47 yard touchdown three plays later.

Mark Welch would recover a fumble on the Cardinals defense's next time out and Copeland would catch a 34 yard touchdown pass two plays later.

Hamburg punted on their next possession and McGee ran for a 69 yard touchdown that was called back due to a penalty. The Cardinal offense, clicking in the air and on the ground, would score again on a 19 yard run by Jacoriae "Bug" Brown.

The offense would add its last touchdown on a shovel pass from Thompson to the speedy and tough AJ Alsobrook from 11 yards out.

With a running clock in the third quarter, Grant Jeffus, Kelvin Brown and Jequavious McKenzie showed flashes of what they are capable of as the Cardinals' depth was on full display.

Defensively, Kameron Eastam had two tackles for losses as the Cardinals defense held Hamburg to just 60 net yards on 26 carries in the first half. The aggressive Red Birds also forced five turnovers - three interceptions and two recoveries on three fumbles - while on its way to a shutout. The Lions didn't complete a pass despite playing two quarterbacks in the game finishing a combined 0/9 with three interceptions. All three interceptions were caught by underclassmen with sophomore linebacker and special teams play-maker Keldrick Cross made an athletic play along the sidelines to reel in the Lions' only turnover in the second half. Jacovey Barker and Mark Welch recovered fumbles during the game.

The Cardinals are set to play the Watson Chapel Wildcats on the road on Friday. The Wildcats were unable to play last week as they had a significant amount o players in quarantine.