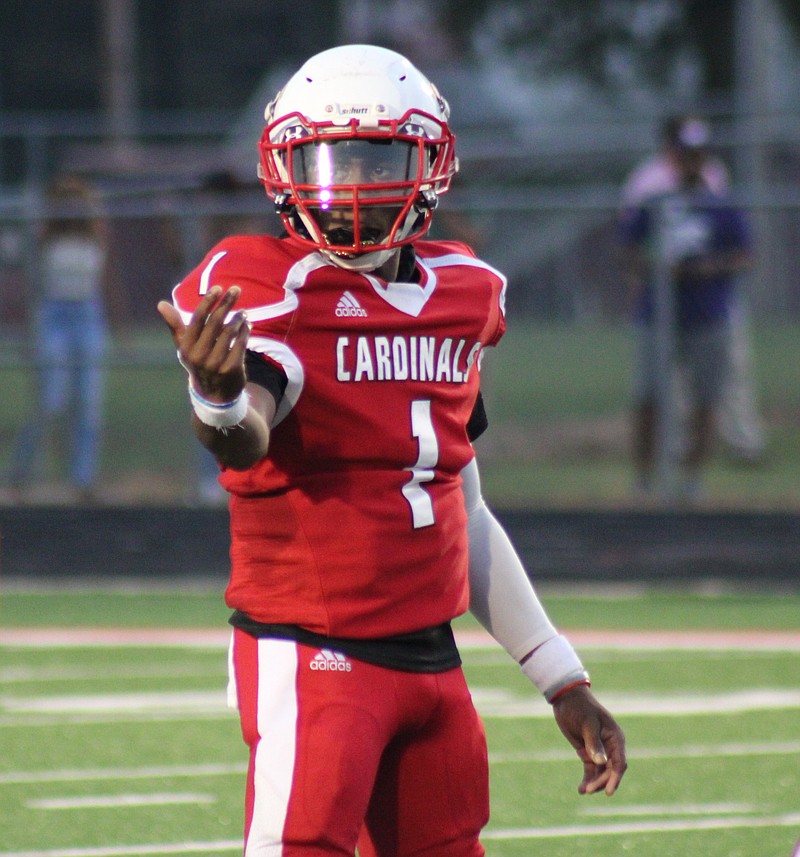 As teams are starting to find their identities and rhythm on the field, several players continue to prove their worth as high-caliber players. Week three had some unique games this past Friday night as two different teams came out with different results. The Camden Fairview Cardinals hosted the Hamburg Lions with little-to-no resistance as they won 52-0. The Harmony Grove Hornets came out of a bye-week with eagerness and intensity as they traveled to face the Fordyce Redbugs. While the game came down to the wire, the Hornets couldn't finish with a win, as they lost to the Redbugs with a 22-20 score. Two fantastic performances came out of those games from both teams as Cardinals quarterback Martavius Thomas and Hornets defensive end Logan McCann were named offensive and defensive players of the week, respectively.

One week after heartbreaking loss at home to their rivals in the El Dorado Wildcats 40-36, the Cardinals wanted to come out against Hamburg with the same intensity while looking to be more efficient on both sides of the ball. Junior quarterback Martavius Thomas continues to prove himself as a leader as he possesses the same leadership values he displayed against El Dorado as he did for Hamburg. On the field, Thomas was nearly perfect as he was picking apart the defense of the Lions. Thomas was finding busted coverage schemes and the pass rush pattern of the Lions early and often.

Thomas threw for 300 yards, four touchdowns, one interception, and a quarterback rating of 126.4 on 14 completions (out of 23 passing attempts). He also rushed for 44 yards and a touchdown on two carries with his longest going for 36-yards. Thomas accumulated all of these statistics in the first half as the Cardinals outscored the Lions 49-0 in the first half.

Thomas' longest pass came from a 60-yard pass to receiver Jarvis Reed, who ran a 15-yard slant route on a busted coverage assignment from the Lions. Thomas had several others plays where he continued to showcase his strong arm and great accuracy along with his excellent decision-making. His best run was an RPO play where he pulled the ball and caused confusion with the Lions' defense as his run resulted in a 34-yard touchdown.

While the Harmony Grove Hornets did not come out of last Friday night with the result they wanted, several standout performances gave the Fordyce Redbugs problems on the field. One of the defensive players that continued to cause chaos in the backfield was senior defensive end Logan McCann. Against the Redbugs, McCann proved to be a constant presence in the backfield of the Fordyce's offense.

McCann accumulated seven and a half tackles, two and a half tackles for loss, and half a sack against the offense of the Redbugs. He was constantly beating the left tackle of Fordyce on the edge and getting into the backfield. Harmony Grove needed McCann to create as much pressure on the Redbugs dual-threat quarterback. McCann's pass rush helped contributed to the Redbugs being shut out in the first half of the game against the Hornets.

McCann even showed his toughness as he came back into the game after missing several plays with a foot injury. Even with the discomfort in his foot, McCann continued to create solidity on the edge. In the first half when Fordyce got the ball into the red zone, McCann, along with linebacker Jermaine Edwards, accounted for a tackle for loss and a sack on two consecutive plays to force a turnover on downs. He was responsible for ruining the majority of Fordyce's scoring drives, despite being in-or-near the red zone.