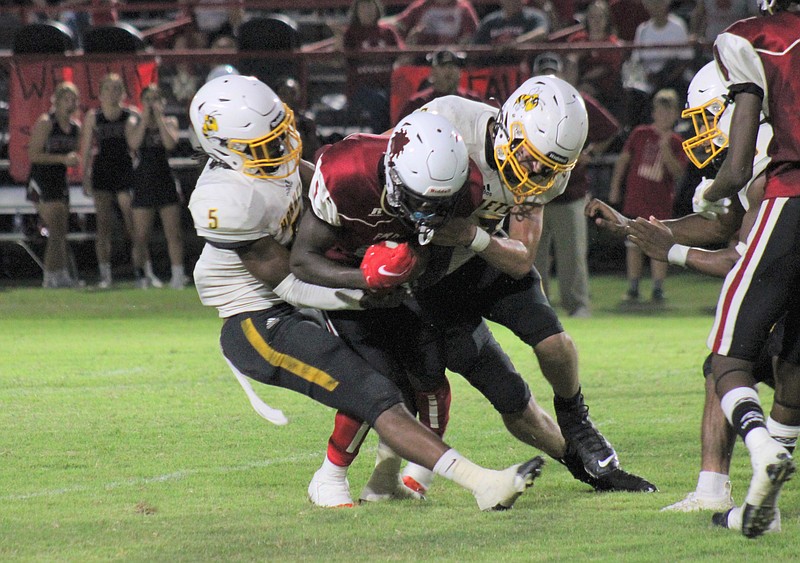 Photo by: Michael Hanich. Harmony Grove Hornets outside linebacker Jermaine Edwards and defensive end Logan McCann combine for a tackle for loss in the backfield of Fordyce

The Harmony Grove Hornets football team has a talented roster, led by one of the most senior classes in the county. The success of their 2021 season will depend on the efficient play and the leadership of their senior class. One of the vital senior leaders on the team is a player that has played and started for a long time. Hornets senior linebacker Jermaine Edwards looks to finish his senior season on a strong note.

Edwards is one of the most experienced players on the Hornets this season as he is a three-year starter at outside linebacker. He is a player that can play multiple positions on the offensive and defensive side of the ball. This isn't because of the lack of Hornets players to fill in the roles, but rather, that Edwards is one of the most athletic players on the team. Last season, Edwards accounted for 75 total tackles, 47 solo tackles, six tackles for loss, seven pass breakups and one interception.

In two games this season, Edwards has accumulated 26 total tackles, 14 solo tackles, four tackles for loss and one forced fumble. Edwards has been one of the consistent and electrifying players for the Hornets again this season. He is highly efficient in reading the plays/ball carrier in the backfield and creating pressure on the edge of the opposing offense. Even if he isn't making the tackles or sacks, he is constantly there in the backfield creating chaos on the opposing offense.

His style of play matches 2019 First-Team All-Pro and Minnesota Vikings outside linebacker Eric Kendricks. Like Kendricks, Edwards isn't fully relied on to be the pass rusher at the line of scrimmage than most defenses like to utilize. Edwards is patient, but fast to create a play for a potential loss in the backfield. He is also finally efficient in defending against the passing game in zone coverage.

Edwards has also been inserted at the wildcat quarterback for the Hornets in several of their schemes this season. He will likely have his offensive production increase once conference play begins. A versatile defender like Edwards will likely have him contribute more on the defensive side of the ball, so he can remain rested to stop opposing offenses.

It is early in the season, but Edwards is proving that he is a serious consideration for first-team all-conference and a potential spot for defensive player of the year.