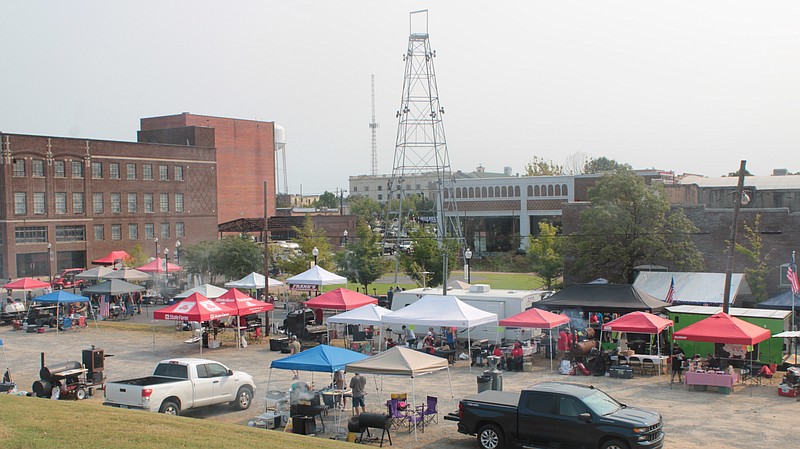 Competitors in the Withrow Family Rib Cook off set up at Washington Avenue on Saturday during the SouthArk Foundation's Outdoor Expo. (Caitlan Butler/News-Times)

The SouthArk Foundation's annual Outdoor Expo was held Saturday, and the South Arkansas Community College West Campus was full of demonstration exhibits, a variety of vendors and the smell of barbeque through the afternoon.

The day started with the Major Ronald Wayne Culver Hero 5K Run/Walk, a staple of the Expo. Culver, 44, was killed in action on May 24, 2010, in Numaniyah, Iraq, when an improvised explosive device struck the vehicle in which he was riding as part of a convoy that was heading back to his base.

Culver served in the U.S. Army National Guard. He was an employee of AmerCable and a community volunteer.

The Expo was also the setting for a memorial ceremony commemorating the events of and lives lost on Sept. 11, 2001.

By 10 a.m., smoke could be seen wafting up the hill the El Dorado Conference Center sits on from Washington Avenue and Locust Street, where a number of groups competing in the Withrow Family Rib Cookoff were set up.

"I don't usually brag on the fire department, but they've got some pretty good jambalaya over there," Roberts joked.

Up the hill and inside the Conference Center, vendors, offering everything from clothing and handmade soaps to lawn care supplies and metal roofing, had booths.

Ashley Kidd, who founded Protect Self Always earlier this year, had a booth full of self defence tools inside the Conference Center.

Also inside the Conference Center was a COVID-19 vaccine clinic. Only two people had gotten their shots by 10:30 a.m., but those providing the vaccine shots were optimistic.

"It's still early yet," said a nurse who administered the vaccines.

Works submitted to the Expo's Student Art Contest were also on display inside. The theme of this year's art show was "Who is my hero?" and among the works exhibited were figures including Martin Luther King, Jr., firefighters, nurses and doctors, police officers, soldiers and even a couple of cartoon characters.

"Tried it and kept doing it," he said.

Nearby, Cedric Morley of Morley Family Magic performed several magic tricks that drew hushed "oohs" and "aahs" from children gathered around him.

"How did he do that?" one child asked his parent after Morley amazed and astounded the small crowd by making a handful of rings dance down a length of rope.

Children had plenty to do at the Expo, between Morley's magic show, several lawn games set up around the Conference Center and KidsWorld, where bouncy houses and other games made for a fun time. Several members of the United States National Guard played basketball at KidsWorld with teenagers and children who passed.

At the top of the hill at the Conference Center a stage was set up for live music. Throughout the day, Jason D. Williams, the Aces Wild Band and the Randall Lawson Band provided entertainment for Expo-goers.

Down Washington Street, classic and tricked out cars lined the road, which was closed to traffic.

The Outdoor Expo is a fundraiser for the SouthArk Foundation, nonprofit that provides scholarships to SouthArk students and contributes to capital improvements at the college.