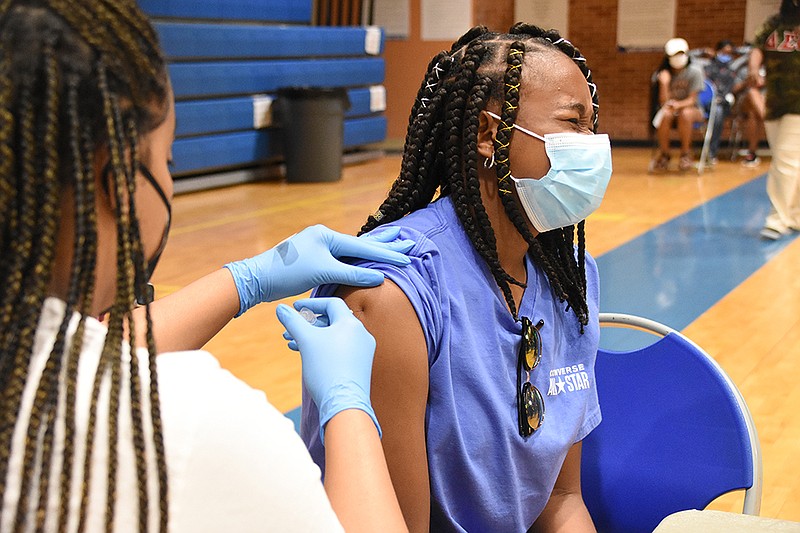 Alyncia Jones, 13, gets her first dose of the Pfzier coronavirus vaccine Saturday, May 15, 2021 from Haley Wilson, a registered nurse, during a vaccination clinic at Dunbar Community Center in Little Rock. (Arkansas Democrat-Gazette/Staci Vandagriff)

Arkansas' downward trend in new coronavirus cases continued Tuesday, and the number of people hospitalized with the virus dipped back below 1,000, reaching its lowest level since July.

The state's count of cases rose by 1,401 -- the seventh daily increase in a row that was smaller than the one a week earlier.

Arkansas' death toll from the virus, as tracked by the Department of Health, rose by 17, to 7,499.

After a surge powered by the delta variant, Health Secretary Jose Romero has said, vaccinations and people who have immunity after recovering from infections could be helping to slow the virus's spread.

"We know that cases went down in Great Britain, as an example, and then they started to go back up again, so we're going to watch that and see if we follow the same trend."

After rising a day earlier, the number of people hospitalized in the state with covid-19 fell Tuesday by 34, to 993, its lowest level since July 26.

The number of the state's virus patients who were on ventilators fell by 11, to 278, its lowest level since Aug. 8 but still higher by 10 than a peak in January during the state's winter surge.

The number who were in intensive care, already below the peaks it reached in January and last month, fell by one, to 439.

[Video not showing up above? Click here to watch » https://www.youtube.com/watch?v=7artxW0bN_w]

The number of intensive care beds statewide that were unoccupied fell by eight, to 62, reflecting an increase in non-covid-19 patients who were in intensive care.

People with covid-19 made up about 40% of all the state's patients who were in intensive care as of Tuesday.

With recoveries and deaths outpacing new cases, the number of cases in the state that were considered active fell by 779, to 14,225. It was the first time the number had been below 15,000 since July 26.

At his weekly news conference at the state Capitol, Gov. Asa Hutchinson noted that, after increasing "dramatically" in July and August, the pace of vaccinations in the state has declined along with its daily case increases.

"Concern is not the right word, but I hope that we can keep the focus on the vaccines," Hutchinson said.

He called the shots "the best assurance" that the state can keep cases from surging again.

Meanwhile, despite complaints in some states of shortages of monoclonal antibodies, which are used to treat people at high risk of complications from covid-19, Hutchinson said Arkansas has ample supplies.

All but nine of the state's 75 counties have at least one provider offering the treatment, according to a Health Department map he displayed.

"We have adequate antibodies there, and we will make sure they get out conveniently to everybody that needs it," Hutchinson said.

The news conference featured a plea from Lori Arnold, director of the American Red Cross' Greater Arkansas chapter, for Arkansans to give blood.

Hutchinson said donations during the pandemic have dropped about 10%, while "the need has increased, particularly in recent days with hurricanes and other things that have happened."

Along with the statewide decrease, the number of active cases among students and employees of the state's public elementary and secondary schools also continued falling.

From Thursday to Monday, the number of active cases in public schools fell by 498, to 2,836, according to Health Department reports.

The Springdale School District, which recently discontinued mandating face coverings at any grade, on Monday had the largest active case total, 94, which was up from 77 on Thursday.

The district, which is the largest in the state in terms of enrollment, on Monday also had the highest cumulative total, 665 cases since Aug. 1.

The Bentonville and Green County Tech school districts each had 50 active cases as of Monday.

In all, 165 of the state's 262 public and charter school systems had five or more cases of covid-19.

That was down from 171 systems last Thursday.

Districts with fewer than five cases are not identified individually in the Health Department reports, but their numbers are included in the totals.

The state's private schools had 73 active cases Monday, down from 100 on Thursday.

Those schools with at least five cases were Episcopal Collegiate School in Little Rock with seven, St. Vincent De Paul Catholic School in Rogers with six and Christ the King School in Fort Smith with five.

Among the state's colleges and universities, the number of active cases fell by 45, to 499.

The University of Arkansas, Fayetteville continued to have the highest number, with 138 on Monday.

That was followed by 60 at Harding University in Searcy and 22 at the University of Arkansas for Medical Sciences in Little Rock.

No new covid-19-related shifts to virtual instruction had been reported to the state, although a shift for fifth graders at the Greenbrier School District's Westside Elementary School, from Sept. 1-3, was only recently recorded in a state database.

In its daily coronavirus report, the Little Rock School District said eight students at several schools and one employee had tested positive in the 24 hours ending at 3 p.m. Tuesday.

An additional 20 students and one employee were required to quarantine after being near infected people.

The Hot Springs/Garland County Covid Task Force noted in its weekly report Tuesday that the number of active cases in the county's seven school districts had dropped by two-thirds, from 101 to 33, from Sept. 13 to Monday.

In a news release, he said the county had 147 active cases among residents on Sept. 19, 2020, less than half of the 328 it had Sunday. Also, last winter's surge did not begin until mid- to late October.

"My recommendation is not to just look at where we are now, but to look at past data as to where we might be headed a month from now," he said.

"Our numbers have really come down over the last three weeks, but it is premature to say that this downward trend is permanent."

In their latest forecast report, released Tuesday, researchers at the the UAMS' Fay W. Boozman College of Public Health predicted that Arkansas' new covid-19 cases and hospitalizations will continue to decline through at least Oct. 12.

"The reason for the decline is unclear," the researchers wrote.

"The number of people vaccinated for COVID-19 in Arkansas has not increased sufficiently since our last report in August to warrant a significant decline in cases."

They said Arkansas could be following a "wave" pattern that has been seen outside the U.S.

The reason for the pattern is "unknown," but it could be partly due to immunity developed by people who have recovered from infections, they said.

"In suggesting this possibility, it in no way implies people should consider foregoing COVID-19 vaccinations, even if they have had previous infections," the researchers said in the report.

For unknown reasons, not all people who are infected develop immunity, they said.

At the same time, they said, research suggests that people who are vaccinated after recovering from infections develop "'super' immunity."

"To forego vaccination is like playing Russian roulette with multiple loaded chambers," the researchers wrote.

Low vaccination rates among young adults and children "strongly support a conclusion Arkansas's COVID-19 pandemic will continue to shift" to those age groups, the researchers wrote.

They noted that children under age 12 are not yet eligible for vaccination, leaving them "completely vulnerable to COVID-19 infection."

Estimating the health care costs of people who have declined to be vaccinated, they said research has found that a hospitalized covid-19 patient costs Medicare an average of $21,042 and that the median cost is $16,000.

By comparison, they said, the average cost of a covid-19 vaccination is $35 to $150, depending on the billing source.

"Since June 21, Arkansas has had 5,222 hospitalizations for COVID-19 related disease," the researchers wrote.

"If all patients who had been hospitalized since June 21 had been fully vaccinated, the cost of the vaccines for those patients would have ranged from $182,770 ($35 per vaccine) to $783,300 ($150 per vaccine). Keeping those patients out of the hospital would have resulted in a savings from $83,552,000 (median per patient cost) to $109,296,460 (mean per patient cost). These estimates do not take into account other expenses related to testing, diagnosis and aftercare."

The report was dated Sept. 13 and based on data through Sept. 12.

It predicted an additional 1,500 Arkansans would be hospitalized over the next month, with the state's death toll topping 8,000 in early October and reaching 8,347 on Oct. 12.

According to rankings on Tuesday by the U.S. Centers for Disease Control and Prevention, Arkansas' number of new cases per capita in the seven-day span ending Monday was the country's 20th-highest, down from the 19th highest the week ending Thursday.

Alabama had the highest rate on Tuesday, with 15.1 deaths per 100,000 residents in the week ending Monday, followed by West Virginia, Idaho, Georgia, South Carolina, Louisiana, Oklahoma, Texas and Wyoming.

Arkansas' average daily increase in cases over a rolling seven-day period fell Tuesday to 1,380, its lowest level since the week ending July 22.

Hutchinson noted that 9.3% of the state's coronavirus tests were positive over the seven-day span ending Monday, which he said was "encouraging," although he'd like it to drop further.

For the week ending Friday, the percentage was 9.7%, falling below Hutchinson's benchmark of 10% for the first time since early July.

The number of people who have ever been hospitalized in the state with covid-19 rose Tuesday by 187, to 25,703.

After dropping the previous four weeks, the number of people claiming winnings from lottery tickets distributed as rewards for receiving a vaccine dose rose last week by five, to 279, said Scott Hardin, a spokesman for the Arkansas Department of Finance and Administration.

Hutchinson announced in late May that Arkansans who received a shot on May 26 or after would be eligible for one of the $20 scratch-off tickets or a pair of gift certificates for hunting and fishing licenses worth a total of $21.

People can claim the rewards at vaccination clinics organized by the Health Department or the Arkansas Foundation for Medical Care or by taking their vaccination cards to one of the department's local health units.

Health Department spokeswoman Danyelle McNeill said 20,605 lottery tickets and 8,454 Game and Fish Commission gift certificates had been given out as of Tuesday.

So far, one person, a Texas man who had been visiting relatives in Arkansas, has won $1 million from one of the tickets, and one person has won $1,000.

At 7,228, the increase in vaccine doses that providers reported having administered, including second and third doses of the Pfizer and Moderna vaccines, was larger by 457 than the one the previous Tuesday.

It was the first daily increase in seven days that was larger than the one a week earlier.

After reaching a two-month low a day earlier, the average number of doses administered each day over a rolling seven-day period rose to 6,209.

According to the CDC, the number of Arkansans who had received at least one vaccine dose rose Tuesday by 937, to 1,664,318, representing about 55.1% of the state's population.

Among the states and District of Columbia, Arkansas continued to rank 37th in the percentage of its residents who had received at least one dose and 42nd -- ahead of Tennessee, Louisiana, Georgia, North Dakota, Mississippi, Alabama, Idaho, Wyoming and West Virginia -- in the percentage who were fully vaccinated.

Nationally, 63.9% of people had received at least one dose, and 54.8% had been fully vaccinated.