Mask mandates return to US college campuses as cases rise 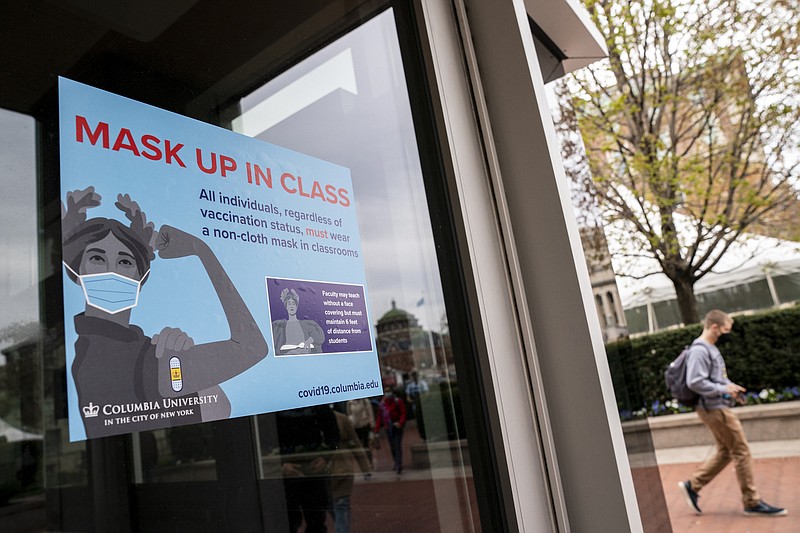 Signs indicating that protective face masks must be worn in classrooms are displayed outside lecture halls at Columbia University, Thursday, April 21, 2022, in the Manhattan borough of New York. (AP Photo/John Minchillo)

The final weeks of the college school year have been disrupted yet again by COVID-19 as universities bring back mask mandates, switch to online classes and scale back large gatherings in response to upticks in coronavirus infections.

Colleges in Washington, D.C., New York, Pennsylvania, Massachusetts, Connecticut and Texas have reimposed a range of virus measures, with Howard University moving to remote learning amid a surge in cases in the nation's capital.

This is the third straight academic year has been upended by COVID-19, meaning soon-to-be seniors have yet to experience a normal college year.

"I feel like last summer it was everyone was like, 'Oh, this is it. We're nearing the tail end,'" recalled Nina Heller, a junior at American University in Washington D.C., where administrators brought back a mask mandate about a month after lifting it. "And then that didn't quite happen, and now we're here at summer again, and there's kind of no end."

Mandates were shed widely in the wake of spring break as case numbers dropped following a winter surge fueled by the omicron variant. But several Northeast cities have seen a rise in cases and hospitalizations in recent weeks, as the BA.2 subvariant of the omicron variant continues to rapidly spread throughout the U.S.

"As much as we would like to move on and think that the pandemic is over, and I think we all would like that to happen at this point, it's wishful thinking," said Anita Barkin, co-chair of a COVID-19 task force for the American College Health Association. "The pandemic is still with us."

COVID-19 had eased so much at Williams College that the private liberal arts school in Massachusetts allowed professors to decide whether to require masks in their classes early last week. But just days later, with cases rising, it reinstated an indoor mask mandate, which was even stricter than what had been in place before.

"I think students are really feeling like people they know are dropping like flies," said junior Kitt Urdang, who's had a half- dozen friends test positive in recent days. "There's definitely been a lot more uncertainty than there's been on campus since COVID hit."

Philadelphia recently brought back its mask mandate, leading the University of Pennsylvania and Temple University to again require them starting Monday. Although the city ended the mandate Thursday, the colleges haven't made any changes.

In Washington, D.C., Howard University's main campus, affectionately dubbed "The Hilltop" by students and alums, was largely quiet this week, with many students taking classes and exams from home. The academic year is coming to a muted end as rising virus numbers prompted administrators to abruptly shift back to online education.

The city's COVID-19 infection rate has more than doubled in April. Besides American, Georgetown and George Washington University also reinstated their indoor mask mandates. But Howard is the only one that has moved away from in-person instruction. The spring semester ends Friday, with final exams for most students starting next week. Administrators have promised an update on what this means for the May 7 commencement ceremony.

"I don't think people are super unhappy about wearing masks," said Lia DeGroot, a George Washington senior who never shed her mask during the single week the mandate was lifted at her school. "Of all of the things that the pandemic has disrupted, I think wearing masks is, you know, a relatively small thing to do. I think that's kind of the mindset that a lot of students have."

In nearby Baltimore, Maryland, Johns Hopkins University announced this month it was testing all undergraduate students twice weekly through Friday, noting a steep rise in cases. The school also said masks would be required not just in classrooms, but in places like residence hall common areas.

In Houston, Rice University announced earlier this month that students should resume wearing masks in classrooms, citing an uptick in cases on campus. Large college parties also were canceled.

New Mexico State University took a different tack, announcing Monday that all students on campus must be fully vaccinated against COVID-19 by July 1, ending the option of submitting weekly tests as an alternative.

One of the few counties still identified by the CDC as having high spread is home to New York's Syracuse University, which announced Monday that it would again require masks in classrooms.

J. Michael Haynie, the school's vice chancellor for strategic initiatives and innovation, said in a letter that "it is important that we take reasonable action to minimize the impact of COVID infections" with finals and commencement fast approaching.

The University of Rochester in upstate New York, the University of Connecticut, Bowdoin College in Brunswick, Maine, and Columbia University in New York City took a similar approach. Many, like Columbia, noted that their surveillance testing programs were finding more cases.

While many students were eager to mask up, grumbling was emerging.

"We're to the point where we're tired of masks," said Neeraj Sudhakar, a Columbia grad student studying financial engineering. "We probably have a 99 percent vaccination rate, so at this point I think we just need to move on with the pandemic and treat it as endemic rather than going back to what we were doing the past two years." 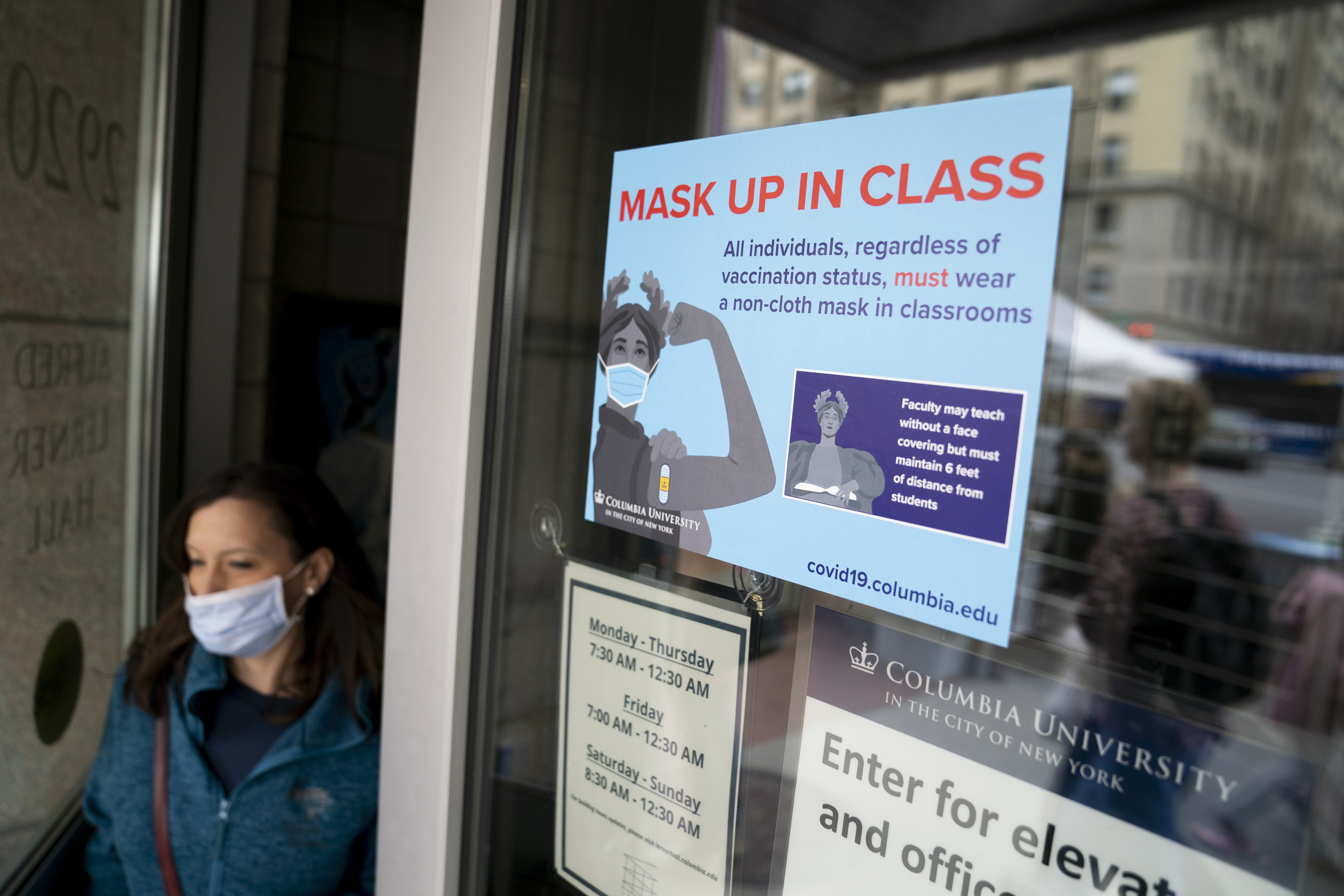 Signs indicating that protective face masks must be worn in classrooms are displayed outside lecture halls at Columbia University, Thursday, April 21, 2022, in the Manhattan borough of New York. (AP Photo/John Minchillo)