Scherzer beats former team despite giving up homer to Soto 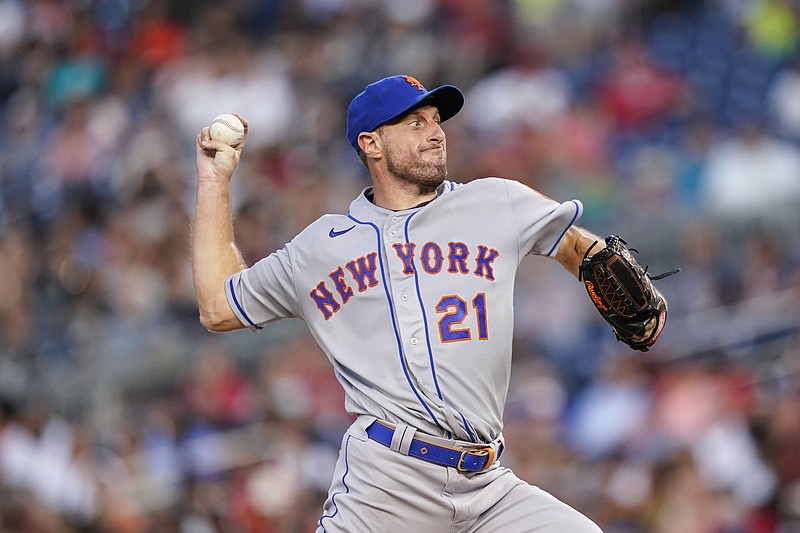 Washington slugger Juan Soto homered off Scherzer (7-2) in what could be his final game with the Nationals. Soto, who walked in his other three plate appearances, is perhaps the biggest star who could be dealt before Tuesday's trade deadline.

Several teammates could also leave Washington as the Nationals, who own the majors' worst record at 35-69 and have lost four of five, look to sell for the second consecutive year.

Corbin (4-15), who leads the majors in losses, allowed four runs and seven hits in 4 1/3 innings while striking out four. He has lost five consecutive starts, posting a 10.29 ERA in that span.

NEW YORK (AP) -- Aaron Judge hit his major league-leading 43rd home run, Jose Trevino had his first multihomer game and the Yankees beat the Mariners in a series opener between teams bulking up for the postseason.

Anthony Rizzo started the onslaught with a three-run homer in the first, and New York clinched its 31st consecutive winning record at home (41-13), second only to its big league standard of 47 in row from 1918-64.

After Kyle Lewis' solo homer in the second against Domingo Germán (1-1), Judge hit a two-run drive in the bottom half. Judge also leads the majors with 93 RBIs.

CHICAGO (AP) -- Salvador Perez and Whit Merrifield hit solo home runs, Daniel Lynch took a shutout into the sixth inning in his return from the injured list and the Royals edged the White Sox.

Perez launched a monster blast for the second straight game and his third homer in four contests after missing 31 games with a left thumb injury and surgery. The seven-time All Star has eight RBIs in the span.

Merrifield's drive into the left-field bullpen off Michael Kopech (4-7) in the sixth might have been his last with Kansas City. A two-time All Star in seven seasons with the Royals, the second baseman has been the subject of trade rumors heading into Tuesday's deadline.

Tim Anderson and Andrew Vaughn each had two hits off Lynch (4-7), but the White Sox slipped back to .500 (51-51). Pinch-hitter Gavin Sheets drove in a run with sac fly in the seventh.

Freddie Freeman had three hits, including a double, and two RBIs as the Dodgers won for the fifth time in six games to improve to 23-5 since June 30.

Wilmer Flores hit his team-leading 16th homer for the Giants, who are 3-9 since the All-Star break after winning five of their previous six.

Will Smith had a run-scoring double off Giants starter Logan Webb (9-5) in a three-run third in which Los Angeles broke open a 2-1 game.

SAN DIEGO (AP) -- urickson Profar homered for the third straight game and Mike Clevinger pitched seven impressive innings for the Padres, who beat the Rockies in the opener of a five-game series.

Trent Grisham also connected for the Padres, who won for just the fourth time in 12 games against the pesky Rockies this season.

Profar homered on the second pitch from Antonio Senzatela (3-6), his third career leadoff homer and the first time he's ever homered in three consecutive games. His shot to right field was his 12th.

Profar also made a diving catch of Randal Grichuk's sinking liner in left field for the second out of the fourth.

Clevinger (3-3) won for the first time in five start.

HOUSTON (AP) -- Jarren Duran homered and drove in a career-high three RBIs, and the Boston Red Sox overcame sloppy fielding early for a win over Houston as the Astros made a pair of important moves a day before the MLB trade deadline.

Houston led 2-1 after scoring twice, thanks to errors in the third inning.

The Red Sox still trailed by a run when Bobby Dalbec walked to start the fifth. There were two outs in the inning when Duran smacked his second homer of the season into the seats in right field to make it 3-2.

The 25-year-old Duran got the Red Sox on the board in the third inning when he drove in a run with a ground-rule double.

Nathan Eovaldi (5-3) allowed four hits and no earned runs with six strikeouts in 6 1/3 innings to get his first win since June 8.

CLEVELAND (AP) -- Amed Rosario homered early and singled in the winning run in the 11th inning for his third hit of the game as the Guardians beat the Diamondbacks.

Rosario hit a line drive past a diving Christian Walker at first base and into right field to score rookie Will Benson from third, setting off a celebration behind the mound.

Rosario, who launched a two-run homer in the third, lined a 1-0 pitch in the 11th from Mark Melancon (3-10), the Diamondbacks' 10th pitcher. Benson began the inning as the automatic runner at second and moved to third on Austin Hedges' bunt.

Steven Kwan walked and stole second, but Myles Straw grounded out before Rosario gave Cleveland its fifth walk-off win of the season.

Arizona advanced a runner to third with one out in the 11th, but Sam Hentges (3-2) retired Jake McCarthy on a line drive to second baseman Andrés Giménez, and pinch-hitter Buddy Kennedy struck out.

MIAMI (AP) -- Rookie right-hander Hunter Greene won for the first time in nearly two months, allowing one hit in six scoreless innings to lead the Reds over the reeling Marlins.

Albert Almora Jr. had three hits, including two doubles, in his first game off the injured list. Joey Votto walked twice and singled for the Reds, who won their third in a row as they began a four-city, 10-game trip.

Cincinnati outfielder Tommy Pham was in the original lineup, then removed and traded to Boston for a player to be named or cash.

Miami has lost eight straight home games and 11 of 15 overall.

Greene (4-12) struck out eight and walked none. He had been 0-5 in eight starts since beating Arizona on June 6.

ARLINGTON, Texas (AP) -- Cedric Mullins homered leading off Baltimore's first game without Trey Mancini, Anthony Santander extended his hitting streak to 12 games with an RBI single and the Orioles matched their 2021 win total with a win over the Rangers.

Hours after the Orioles traded their longest-tenured player and fan favorite, with Mancini going to Houston in a three-team deal, they won their 52nd game to get back over .500 and within 2 1/2 games of the American League's final wildcard spot. Baltimore was 52-110 last season.

Spenser Watkins (4-1) struck out five without a walk over six innings. The only run allowed by the right-hander was on a solo homer by Corey Seager in the sixth inning.

MINNEAPOLIS (AP) -- Gio Urshela hit a game-ending, two-run homer in the 10th inning and Jose Miranda had three RBIs as the Twins came back to beat the Tigers and maintain their one-game lead in the AL Central.

Akil Baddoo delivered a go-ahead single in the top of the 10th off Griffin Jax (5-2) against the team that drafted him six years ago.

Miranda responded in the bottom of the inning by driving in the automatic runner with a single, and then Urshela finished it with his high drive onto the grass berm beyond center field against Alex Lange (4-2). That kept the Twins alone in first place, just ahead of Cleveland after the Guardians beat Arizona in 11 innings.