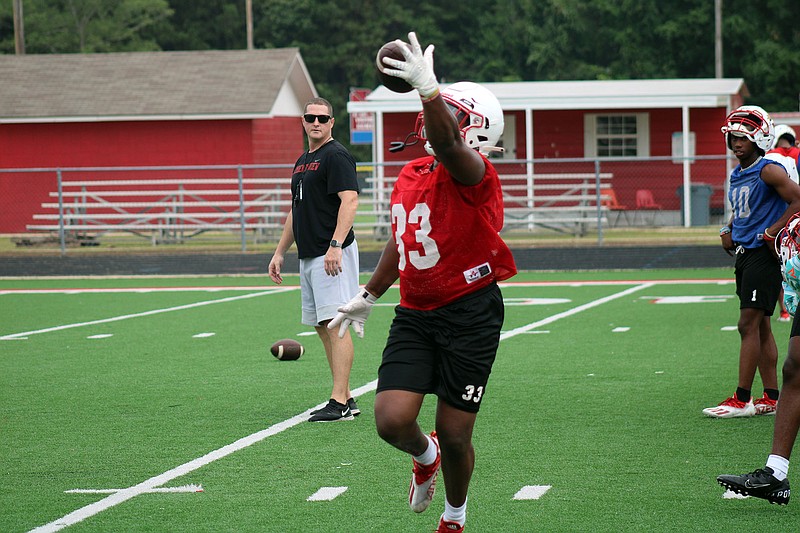 Ouachita County is full of high-volume football players that are devoted to playing on both sides of the field.

There are multiple playmakers in the county that are among some of the most dynamic players in South Arkansas. These are players that will be highly influential for their teams in the 2022 season.

The Camden Fairview High School football program has had many players who could be relied on for their skills on both sides of the field, like former offensive tackle/defensive tackle Mark Welch and running back/cornerback Ja'Toney McGhee, who played on both ends of the field not due to the lack of talent on the team, but because they were influential and conditioned enough to play an through the entirety of a game.

While Welch and McGhee have graduated, Camden Fairview has other players that can contribute on both sides of the field this season, and one who quickly comes to mind is junior Caleb Tate.

Tate is a tight end, running back and a defensive end for the Cardinals this season. He was set to play linebacker in 2022, but head coach Nick Vaughn said he felt Tate's dynamic presence was needed on both sides of the field.

Tate will have an opportunity to make a significant impact as an extra pass-catcher in the backfield, a lead blocker and a defensive end this season. He possesses solid feet movement and the ability to drive a defensive player away from the ball carrier. As a pass-catcher, he has soft hands to secure the catch and he is a solid route-runner.

As a defensive end, he has an explosive get-off at the snap of the football, agility to quickly off blocks, and he has good strength. He is a consistent tackler as he can make the open field tackle.

It is no secret that Junior Landon Garrett has been one of the best players for the Harmony Grove Hornets going into the 2022 season. An all conference cornerback and wide receiver, Garrett caught 22 receptions for 573 yards and eight touchdowns while also rushing for 213 yards and two touchdowns on 27 carries last season. As a lockdown cornerback, Garrett accounted for 19 total tackles, 13 solo tackles, one tackle for loss, 10 pass breakups, seven interceptions and one fumble recovery. Three of the interceptions accounted for last season were returned for touchdowns.

Garrett's explosiveness off the snap of the ball, has explosive speed, superior athleticism and unique athletic abilities have made him one of the most dangerous past catchers in South Arkansas. As a defensive back, he efficiently reads the quarterback's eyes and quickly turns his hips to mirror the movement and turns of the opposing receiver. He could likely play throughout the receiver corps and the secondary.

The Bearden Bears are team that needs players to contribute on both sides of the ball as they do not have much depth. One player that will have a big responsibility in 2022 is senior fullback, running back and defensive tackle Thomas Brunston.

Brunson measures in at 6 foot 6, 255 pounds, which makes him a hard running back to bring down if he gets the ball in certain packages. He is a bruising back, as both a ball carrier or a blocker in the backfield in traditional fullback setups. He possesses a high motor, great feet movement and an aggressive playstyle that helps him get great push. That push that he uses on offense also transcend well to the defensive side of the ball as he can pentrate the backfield consistently. He will be a driving force for the Bears this season as the football team aims to get their first win since the 2020 season.