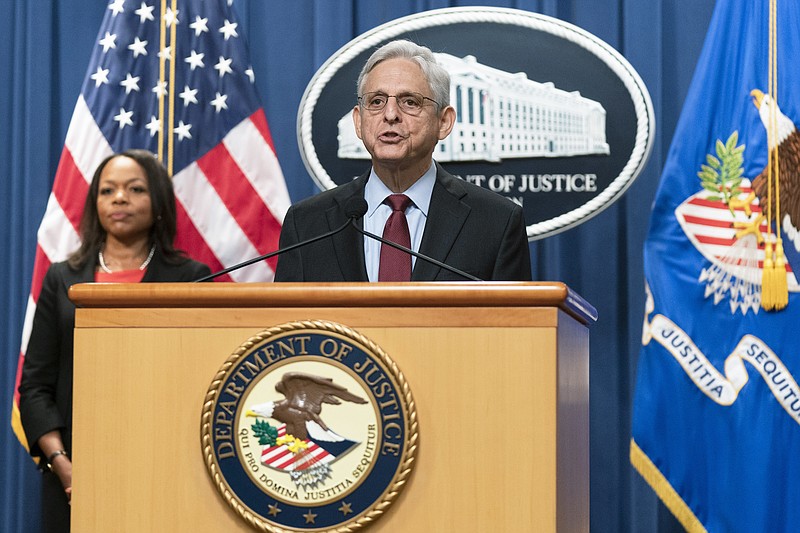 Attorney General Merrick Garland with Assistant Attorney General Kristen Clarke for the Civil Rights Division, speaks during a news conference at the Department of Justice in Washington, Thursday, Aug. 4, 2022. The U.S. Justice Department announced civil rights charges Thursday against four Louisville police officers over the drug raid that led to the death of Breonna Taylor, a Black woman whose fatal shooting contributed to the racial justice protests that rocked the U.S. in the spring and summer of 2020. (AP Photo/Manuel Balce Ceneta)

LOUISVILLE, Ky. (AP) -- The federal government filed civil rights charges Thursday against four Louisville police officers over the drug raid that led to the death of Breonna Taylor, a Black woman whose fatal shooting helped fuel the racial justice protests that rocked the nation in 2020.

The charges are another effort to hold law enforcement accountable for the killing of the 26-year-old medical worker after one of the officers was acquitted of state charges earlier this year.

"Breonna Taylor should be alive today," Attorney General Merrick Garland said in announcing the charges, which include unlawful conspiracy, use of force and obstruction of justice.

The charges named former officers Joshua Jaynes and Brett Hankison, along with current officers Kelly Goodlett and Sgt. Kyle Meany. Most of the charges stem from the faulty drug warrant used to search Taylor's home.

Hankison was the only officer charged Thursday who was on the scene that night. Louisville police said they are seeking to fire Goodlett and Meany.

Taylor was shot to death by officers who knocked down her door while executing a search warrant. Taylor's boyfriend fired a shot that hit one of the officers as they came through the door, and they returned fire, striking Taylor multiple times.

The Justice Department is also conducting a non-criminal investigation of the Louisville Police Department, announced last year, that is probing whether the department has a pattern of using excessive force and conducting unreasonable search and seizures.

In the protests of 2020, Taylor's name was often shouted along with George Floyd, who was killed less than three months after Taylor by a Minneapolis police officer in a videotaped encounter that shocked the nation.

Garland said the officers who were at Taylor's home just after midnight on March 13, 2020, "were not involved in the drafting of the warrant, and were unaware of the false and misleading statements."

Hankison was indicted on two deprivation-of-rights charges alleging he used excessive force when he retreated from Taylor's door, turned a corner and fired 10 shots into the side of her two-bedroom apartment. Bullets flew into a neighbor's apartment, nearly striking one man.

A separate indictment said Jaynes and Meany both knew the warrant used to search Taylor's home had information that was "false, misleading and out of date." Both are charged with conspiracy and deprivation of rights.

Jaynes was fired in January 2021 for violating department standards in the preparation of a search warrant execution and for being "untruthful" in the Taylor warrant.

Jaynes and Goodlett allegedly conspired to falsify an investigative document that was written after Taylor's death, Garland said. Federal investigators also allege that Meany, who testified at Hankison's trial, lied to the FBI during its investigation.

The Taylor case also prompted a review of the city's "no-knock" warrant policy. Officers at Taylor's door said they knocked and announced they were police even though the warrant didn't require that. Those types of warrants, used in drug investigations to attempt to prevent the destruction of evidence, were later banned in the city of Louisville.