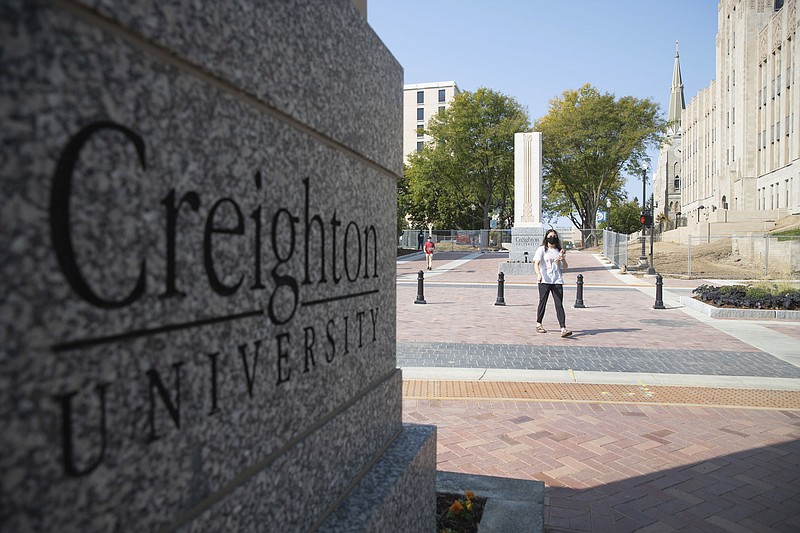 FILE - Students walk across 24th Street after the 24th Street dedication and ribbon cutting on the Creighton University campus in Omaha, Neb., Thursday, Sept. 24, 2020. The Nebraska Supreme Court on Friday, Aug. 12, 2022, has dismissed an appeal by a handful of Creighton University students seeking to be exempt from the school's COVID-19 vaccine mandate last year, arguing that getting the shots would violate their religious beliefs against abortion. (Lily Smith/Omaha World-Herald via AP)

OMAHA, Neb. -- The Nebraska Supreme Court on Friday dismissed an appeal by a handful of Creighton University students who sought to be exempt from the private Catholic school's COVID-19 vaccine mandate last year, arguing that getting the shots would violate their religious beliefs against abortion.

The state's high court said it didn't have jurisdiction, citing its 150-year stance that people can't appeal orders denying or granting temporary injunctions. In this case, a judge last year declined to issue a temporary injunction that would have blocked Creighton University's requirement that all students get the COVID-19 vaccination.

"Because the court's denial of a temporary injunction was not a final order, we lack jurisdiction of the appeal and must dismiss it," Justice William Cassel wrote for the court.

The 10 students who sought the injunction said they had religious objections to the vaccines because they "were developed and/or tested using abortion derived fetal cell lines."

Laboratory-grown cell lines descended from fetuses that were aborted decades ago were used in some early-stage testing of the Pfizer and Moderna vaccines and to grow viruses used to manufacture the Johnson & Johnson vaccine. The vaccines do not contain fetal cells.

The Vatican declared in 2020 that it is "morally acceptable" for Roman Catholics to receive COVID-19 vaccines based on research that used cells derived from aborted fetuses when "ethically irreproachable" vaccines aren't available.

Douglas County District Judge Marlon Polk said in his September 2021 ruling that he wouldn't order the mandate be temporarily blocked because he didn't think the students would ultimately prevail in court. That's because the students had signed a form promising to get vaccinated once regulators fully approved one, the judge noted. The students appealed.

An attorney for the students, Robert Sullivan, said Friday that while he wished the state's high court had decided the appeal on its merits, the fact that it was decided on a technicality allows the students to continue their legal fight.

"The vast majority of the students want to move ahead with the case and see what we can get done," Sullivan said. Most of the students went on to enroll at other schools, he said, while one had enough college credits to graduate over summer.

An attorney for the university did not immediately return a phone messages left Friday by The Associated Press seeking comment.

The private university in Omaha is affiliated with the Jesuit order of the Catholic Church, which teaches that abortion is a grave sin.

The university issued its mandate for students in August 2021, after the U.S. Food and Drug Administration granted full approval to the vaccine made by Pfizer. At the time, Creighton allowed only medical, not religious, exemptions to its vaccine requirements. However, the school added a religious exemption ahead of the 2022-23 academic year, Creighton spokesman Sam Achelpohl said.

Students refusing a vaccine on religious grounds must fill out a form and get approval from the university, according to the school's website.

Achelpohl declined to comment on Friday's ruling or the ongoing lawsuit.